Learn all about major shifts in the smart speaker market; Google’s new Local Guide recommendations; continued effects of the local ranking shakeup; responses to the WSJ article on Google’s search practices; Google’s new patent; explosive growth in Rich Answers; product reporting in Search Console; using Duplex to buy movie tickets; and some ways you may be using Bing without knowing it.

In a surprising finding, new market research from Canalys shows that global sales of Google Home devices are down 40% from 2018. Analysts suspect the drop is largely due to the fact that, last year, Google ran several promotions that essentially made the devices free or very inexpensive for many consumers, thereby boosting sales. Still, the dropoff stands in dramatic contrast, not only to the steadily increasing market penetration of Amazon’s product line, but also to the emergence of major international players in the smart speaker market including Baidu, Alibaba, and Xiaomi. Global shipments so far in 2019 for Alibaba, at 3.9 million, and Baidu, at 3.7 million, have already exceeded the 3.5 million units shipped by Google. Amazon currently dominates the market, with 10.4 million units shipped so far in 2019. 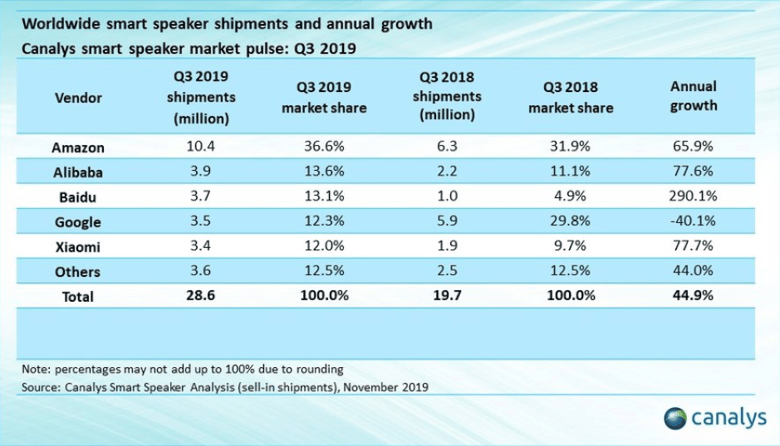 Google is piloting a new program that allows users to follow Local Guides and receive recommendations about local businesses, in the “For you” tab on the Google Maps app. The program will be initially rolled out to select cities around the world including London, Mexico City, New York, and Bangkok. Presumably, Local Guides who have achieved high status due to the volume and quality of their contributions will be eligible to participate in the program. In their announcement of the new feature, Google notes that there are now 120 million Local Guides providing reviews, photos, and other content in 24,000 cities and towns worldwide.

In a post on Search Engine Land, Joy Hawkins has offered some additional observations about the dramatic local ranking adjustments she recently dubbed the “Bedlam” update. Hawkins notes that ranking fluctuations outside the norm continued beyond the first week of November, with BrightLocal’s Local RankFlux tool indicating significant volatility as recently as November 14.

Hawkins also expands on her recent comments about the update being mostly about relevance. She observes, for instance, that in categories like attorneys and dentists, Google used to heavily favor listings where the search term matches the business’s primary category. After the update, other listings began to rank, where a service was mentioned on the business website but was not listed as the primary category. The emerging picture seems to be that Google is looking to a broader set of sources to determine relevance, and consequently placing somewhat less importance on the primary category in the listing.

The Wall Street Journal published a bombshell of a story on November 15 entitled “How Google Interferes With Its Search Algorithms and Changes Your Results.” The article alleges that Google manipulates search results to favor big businesses, suppresses controversial content, and blacklists certain sites despite public denials. Now Search Engine Land has published articles from Greg Sterling and Barry Schwartz claiming not only that many of the Journal’s allegations are incorrect or misleading, but also that at least some of the “more than 100 inverviews” the Journal conducted resulted in misquotations. In particular. Shwartz shares the story of SEO veteran Glenn Gabe, who claims the Journal inaccurately quoted him as describing Google search practices with the phrase “black magic” -- despite agreeing that his comments would be off the record. Schwartz points out that he was one of those interviewed, and that the reporters seemed to misunderstand the nuances of Google search, and to be overly eager to paint a picture of malicious behavior on the part of the search engine.

Google has been awarded a new patent, “Automatic Delivery of Customer Assistance at a Physical Location,” that describes processes for sending data and notifications to users, presumably via their smartphones, when they are in or near a brick and mortar store. The technology described in the patent would allow Google to pinpoint the user’s physical location, such as a specific aisle in a store; gather all the information Google has about that user; and offer recommendations and assistance in making in-store purchases. Google would potentially use a range of information about the user, such as purchase history and loyalty program membership, in order to provide highly personalized recommendations. This recommendation engine would make use of AI and machine learning as well as purchase data from similar users. The patent even mentions accessing a user’s calendar, emails, chats, texts, and family information. The stated intent of the patent is to make the in-store purchase process more engaging.

Rich Answers have doubled since 2018

Perficient Digital has released the results of a study of 1.4 million Google mobile search queries. The study finds that Rich Answers have more than doubled since 2018, an increase driven primarily by a 151% rise in image carousels. The study considers Rich Answers to consist of a range of results including image and non-image carousels, Knowledge Graph-derived results, Featured Snippets, and other “enhanced” results that stand in contrast to traditional blue links. Though image carousels have dramatically increased, Featured Snippets and Knowledge Graph results are relatively flat. Rich Answers occur 40% more often on mobile than on desktop. 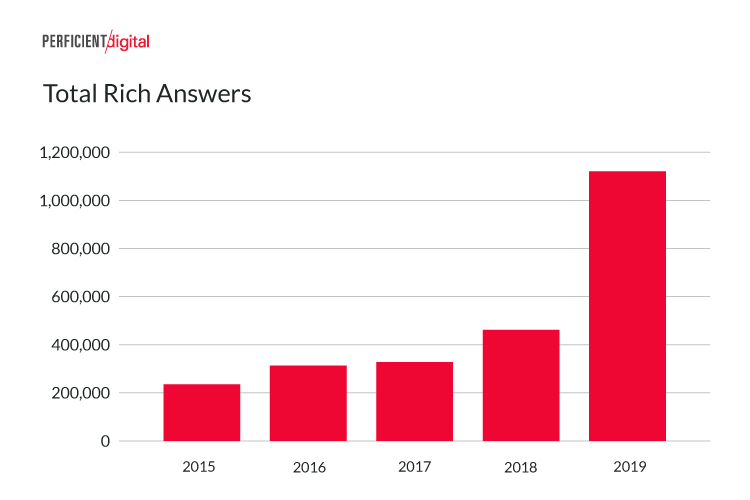 In other news related to enhanced search, Google has added reporting to Search Console for clicks and impressions related to product rich results. Now, retailers using product markup can track its effectiveness with reporting that breaks out “Product results” into a separate category. Below is an example of a rich result for lava lamps at Walmart. 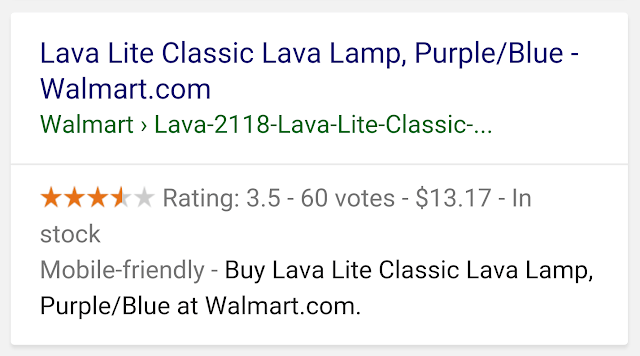 You can now ask Google Duplex to buy movie tickets

Google has officially launched “Google Assistant in Chrome,” a web-based instance of Google’s AI-driven Duplex service. Android users will be able to buy movie tickets from as many as 70 different theater chains, as well as ticket resellers like Fandango, by interacting with the Assistant, which will complete transactions and streamline the ticket buying process. The launch fulfills part of Google CEO Sundar Pichai’s promise at Google I/O earlier this year, that Duplex would help with more and more everyday tasks, starting with movie tickets and car rental.

Some ways you're using Bing without knowing it

After so much Google news, let’s close by turning briefly to Bing, the neglected stepchild of search. Mark Irvine of WordStream has published a helpful article on LinkedIn that calls attention to the many ways we use Bing without perhaps being aware of it. For instance, the 1.5 billion computers running Windows today use Bing as the default search engine for searches from the toolbar or the Cortana voice assistant. Bing is also integrated into a range of Microsoft’s other software and hardware products, including the Microsoft Office suite, Skype, Teams, and Xbox. Bing powers search results in Amazon’s Alexa devices as well as providing search content to sites like Yahoo, AOL, and DuckDuckGo. Check out the article for more.