In this week’s update, learn about Google’s new “Latino-owned” attribute; key takeaways from LocalU Advanced; the fundamentals of E-A-T; expanded business profiles on Twitter and WhatsApp; image carousels in Google Maps; and the temporary disappearance of hotel website links.

As noted by Krystal Taing on Twitter, Google has added “Identifies as Latino-owned” to the list of GMB attributes that appear under the heading “From the business,” a set of attributes that also includes “Identifies as Black-owned,” “Identifies as veteran-led,” and “Identifies as women-led.” The term “identity attributes” (first coined I think by Colan Nielsen) has become the common way to refer to them. As Taing points out, the launch of the new attribute seems to be timed to coincide with the beginning of Hispanic Heritage Month on September 15. Google has been adding new identity attributes to GMB on a fairly regular basis, with “Black-owned” first appearing in 2020 and “women-led” in 2018. Though it will take some time for the brand-new “Latino-owned” attribute to show up in search results, we can expect it will appear in a format similar to what we’ve seen for the other identity attributes. Nielsen’s post on the topic of identity attributes in April pointed out that they are, in fact, a ranking factor if the query contains the attribute -- which is easily illustrated by examples like the one below. (It’s worth noting that Yelp has a more extensive set of similar attributes.) 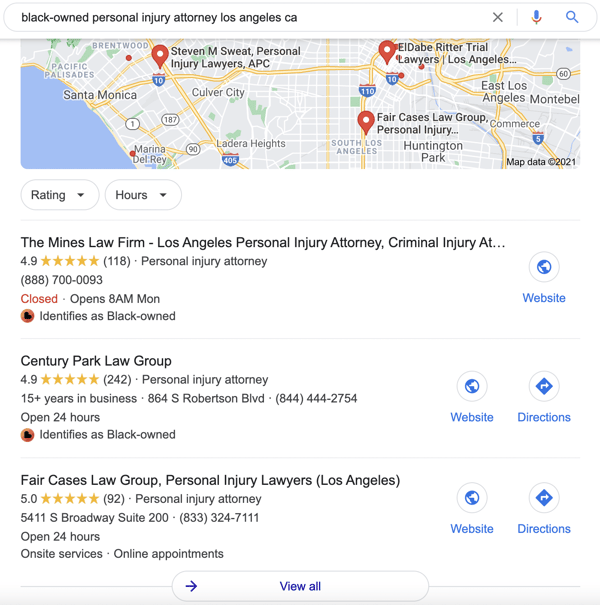 If you missed LocalU Advanced in August, Claire Carlile has an incredibly useful writeup of important takeaways on the Bright Local blog from presentations by Joy Hawkins, Rachel Anderson, Greg Gifford, and Dana DiTomaso. The post is so detailed that it isn’t easy to summarize -- suffice to say those with an interest in the following topics should go read the whole thing.

Local SEO photo optimization: Joy Hawkins informs us that proper image optimization in GMB and the business website can help your business look better, rank better, and get more leads. She notes that product images in GMB are important for certain categories, and cover images are important for all business types. Google is increasingly showing both in local pack results.

Content Usefulness Signals: Rachel Anderson explained that E-A-T (expertise, authority, and trust) has been flagged as important by Google but is impossible to measure directly, whereas Content Usefulness Signals (CUSs) can offer metrics that may mirror how search engines see your content. Anderson explains how to use entity extraction, clustering, and other text analysis methods to measure the ranking potential of your page content.

Link building for local: Greg Gifford’s talk emphasized the fact that link building, especially for small businesses, is still a highly rewarding tactic for local SEO. Businesses can earn links through participation in local sponsorships, clubs, and business associations. The link building process should involve comparing your link profile with your competitors and identifying opportunities to gain links competitors don’t have.

Google Analytics 4: The latest iteration of GA was launched in 2020, and Dana DiTomaso offers a primer on the update, which represents a major shift in thinking about web analytics. Events are emphasized over sessions, and engagement rate has replaced bounce rate. In GA4, an “engaged session” means the user has your website open in the foreground (not on a hidden tab), has completed a conversion event, or has viewed 2 or more pages. Many events are now tracked by default without having to configure them using Tag Manager. Lots more info on GA4 can be found in Carlile’s writeup.

Speaking of E-A-T, Search Engine Journal has published the first article in a new six-part series entitled “Your Guide to Google E-A-T,” written by a group of experts including Lily Ray and Roger Montti. In the first installment, SEJ’s Anna Crowe explains that E-A-T is part of Google’s core algorithm and is flagged as very important in Google’s Search Quality Rater Guidelines. First added to the guidelines in 2014, E-A-T takes into account the expertise of the author, as well as the authoritativeness and trustworthiness of the author, content, and website.

E-A-T is not a ranking factor per se; it’s best thought of as a standard you want to meet in order to stand a good chance of ranking for the content you publish. According to Crowe, the tactics you can employ to meet the E-A-T standard include: publishing “about us” information showing your authors’ credentials; using experts in your field as authors; using headers to make the purpose of your content clear; updating content regularly as circumstances change; linking to high-quality sources; considering multiple viewpoints; and paying attention to your online reputation, since positive reviews are a signal of trustworthiness. 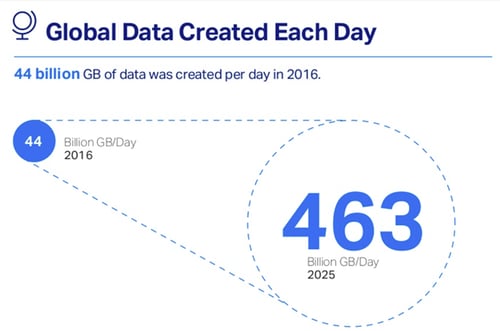 Also worthy of mention on Search Engine Journal is another article by Anna Crowe on the 8 search ranking factors that matter the most, and a deep analysis by Danny Goodwin and others that assesses the ranking importance of 88 on- and off-page SEO factors.

Back in April, Twitter launched Professional Profiles, a feature whereby businesses and users in a few other categories could create expanded profiles. Local businesses are a particular target of the new functionality, and can now qualify to display an About Module that shows the business location along with a link to launch directions in your preferred mapping app, and a contact button that can initiate communication via text, email, DM, or phone.

These expanded Twitter profiles may be difficult to find, however, since there is no local search functionality tied to them. That’s not the case with WhatsApp, which has launched a new local directory of businesses in Brazil. Businesses can create profiles using the WhatsApp Business app that display their name, category, profile picture, address, hours, website, products, services, social links, email, and description. Facebook hopes to build out WhatsApp as a local search destination in parts of the world where WhatsApp is more heavily used than Facebook.

Barry Schwartz reminds us of a feature that, although it may not be brand new, further emphasizes the need to curate the images that appear in your Google My Business profiles. In Google Maps for desktop, mousing over any map pin brings up a capsule version of the business profile in a popup window that displays a prominent carousel of images. Clicking the arrows lets you scan through several of the images in that location’s gallery, with the last item in the carousel being a “More Images” link that takes you to the full GMB gallery. This user experience is similar to what one sees in the Google Maps app, where search results show a slightly different looking image carousel at the top. Remember, if you aren’t managing your GMB images, it’s random user photos that consumers will see in these prominent carousels -- photos that may or may not show your business in a favorable light. 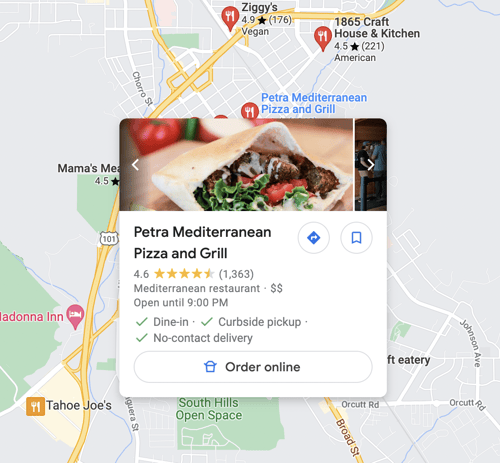 Also from Barry Schwartz comes news that a bug caused the website link to temporarily disappear from profiles of hotels in the Google Hotels interface. The “Website” button, which usually appears alongside “Directions,” “Save,” and “Share” near the top of the main profile page for each hotel, went missing on September 15, as reported on Twitter by Lluc Penycate and confirmed by Tim Capper. However, on September 16, Google’s Danny Sullivan posted on Twitter that the buttons had been restored and that their removal was “apparently a bug.” Sullivan reported that Google was still exploring the issue and any further instances should be reported to him. 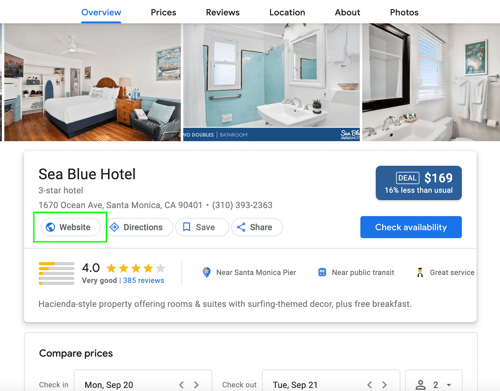 Google hotel profile with website link in its proper location