Google has updated its “How Google Search Works” video, designed to accompany its Google Search help pages, for the first time in about 7 years. The previous version, originally posted in 2012, starred once-ubiquitous Google spokesperson Matt Cutts, and is still valid in many respects; but the new video is a bit longer, includes several updates, and focuses attention on topics Cutts’s video did not address, such as manual quality control and the challenge of providing relevant results for new search queries. As the video states, “One in every seven searches is for something that’s never been typed into the search box before, by anyone, ever.”

You can view the new video below:

The Google Maps team has been busy lately, launching a range of smaller updates in the past week. To begin with, short names are now displaying on the About tab in mobile Knowledge Panels, with the option to share with others via text, email, and social networks. Short names, as you may recall, were introduced back in June as a way for businesses to share brief, branded URLs pointing to their business listings. Now consumers will be able to view and share short names, if they happen to notice them in their not-too-conspicuous new location. 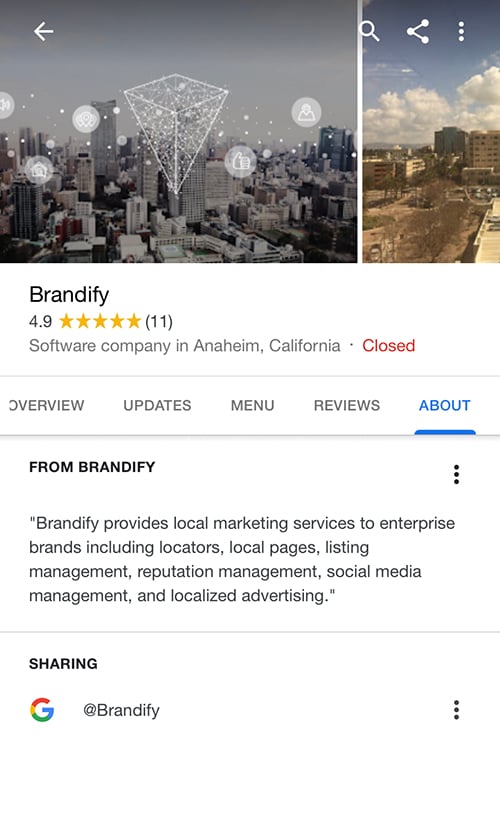 Short name displayed under Sharing heading in mobile About tab

Also in June, Google announced that the most popular 5% of businesses in each category would be awarded a “Local Favorite” badge. Now Google has launched Local Favorite lists, focused on restaurants in New York, Chicago, and Los Angeles. The announcement states that Maps will contain a filter that will allow users to find favorites more easily, and that businesses will be sent a promotional kit, including window stickers, if they are selected as a Local Favorite.

Google says BERT algorithm does not produce values or scores

Google’s Danny Sullivan responded to questions on Twitter about Google’s new BERT natural language algorithm by affirming that BERT “doesn’t assign values to pages. It’s just a way for us to better understand language.” The comments are no doubt sparked by numerous conversations, since the unveiling of BERT two weeks ago, about how to optimize for the change and how BERT affects ranking. To both of those questions, Google has provided a consistent answer: you can’t, and it doesn’t, because BERT is designed merely to improve Google’s understanding of natural language.

If you’re interested in some of BERT’s broader applications, be sure to check out RankSense CEO Hamlet Batista’s “How to Use BERT to Generate Meta Descriptions at Scale” on Search Engine Journal.

Privacy-oriented search company DuckDuckGo has commissioned a study on user search preferences that indicates many users will choose alternatives to Google if given the opportunity. The study asked 3,000 adults in the U.S., U.K., Germany, and Australia which search engine they would select as default on their Android phones if given an explicit choice between 4 or 8 options. The results demonstrated that non-Google search engines would see a significant boost in market share if consumers were given more options. When asked what qualities are most important in a search engine, respondents selected privacy as the second most important factor, behind only quality of results. 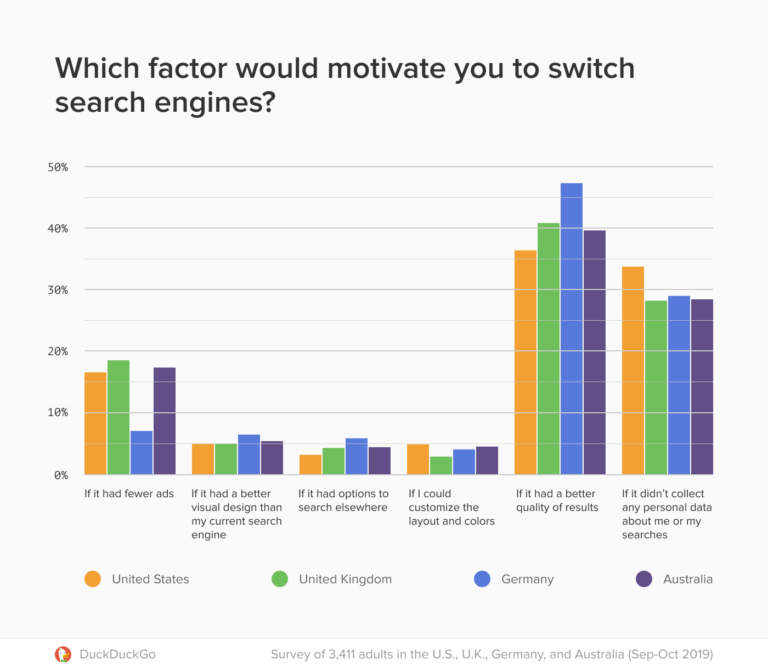 Google rolls out Merchant Center updates for the holidays

Google has unveiled several updates to the Google Merchant Center, timed to help merchants generate more business during the holiday season. The new features include automated feeds, whereby Google can add your products to Google Shopping by crawling your site and extracting information from Schema-structured product pages. Another feature, automatic image improvements, will attempt to remove promotional text from images via an automated process, since promotional text will cause images to be rejected. A third feature, Surfaces across Google, allows merchants to upload product inventory for free, making products available for Google to display across various “surfaces,” like Google Images and rich product results in search.

Uber, Lyft, and DoorDash have teamed up to form a new Protect App-Based Drivers and Services coalition, with the intent of fighting California’s new law, AB 5. The law would require companies that rely largely on contract labor to make contract workers into employees. The coalition is attempting to place a referendum on the California ballot that would exempt ride-sharing services from the law. The companies are also offering perks to workers who choose to remain contractors, such as a pledge to pay workers 20% more than minimum wage.