In today’s Monday Memo, learn about the global balance of online to offline sales; Domino’s name recognition feature; how to remove unwanted Postmates links in GMB; the new “Go” tab in Google Maps; Google Posts with multiple images; Google’s update on user contributions and spam; and the digital transformation of grocery stores.

According to “The Connected Consumer,” a report from Eagle Eye, 90% of purchases in the U.S., U.K., Canada, and Australia are still completed in a physical store, even though most consumers prefer to use their phones or desktop computers when researching products. The report attributes the preference for offline purchasing to the fact that customers still prefer to try products out in person before purchasing, and suggests that retailers can better leverage the online to offline connection by creating “digitally augmented stores” where the online experience continues inside the store.

Curious about the 90% figure, I scanned the report’s footnotes, and found this citation: “See the latest US Census Bureau data as an example.” The Census Bureau statistics fluctuate, but the latest update has U.S. online purchases in Q4 2019 at 12.8% of all purchases, or 11.4% when adjusted for seasonal variations -- meaning 87.2% to 88.6% of purchases were completed offline. It’s unclear how Eagle Eye is extrapolating this data to make their claim about global purchase behavior, though it’s safe to assume the majority of global sales occur offline, as they do in the U.S. For example, Digital Commerce 360 estimates global online sales at 16.4% of all sales, meaning 83.6% are offline.

Domino’s is using footage of George Wendt from Cheers -- where everybody knows your name -- to promote its new name recognition service for carryout orders. The service asks customers to tap “I’m Here” in the Domino’s app when they arrive to pick up their pizza, allowing staff to prepare the order and greet the customer by name. This move follows previous successes in online ordering by pioneers like Starbucks and McDonald’s, and signals a trend toward innovations in personalization and efficiency.

How to remove Postmates links from Google My Business profiles

Some businesses, and consumers, have been frustrated by links to Postmates and other online ordering and delivery services in Google My Business listings that are not actually affiliated with the business and may be unable to fulfill orders. Google has shared two methods for getting unwanted ordering links removed: first, contact Postmates (or whatever service is showing up in the listing) directly to request removal; second, fill out Google’s opt out form.

The Society of American Florists recently issued a complaint to both Postmates and Google claiming that unwanted Postmates links caused customer confusion before Valentine’s Day, leading in some cases to negative reviews left for the business which were really complaints about Postmates. In a blog post on the topic, the Society’s Katie Butler outlines additional steps taken to remove the listings and notes that the removal process is slow, frustrating, and in need of improvement.

Some users downloading the latest version of Google Maps for Android are seeing a new “Go” tab that combines the function of the previous “Commute” tab along with features related to public transportation. The new tab shows users common commuting destinations like “Home” and “Work,” along with places visited in the recent past in order to allow easy access for repeat visits. Users are also seeing subtabs, such as “Lines” and “Stations and Stops,” that make it easier to access public transportation options. 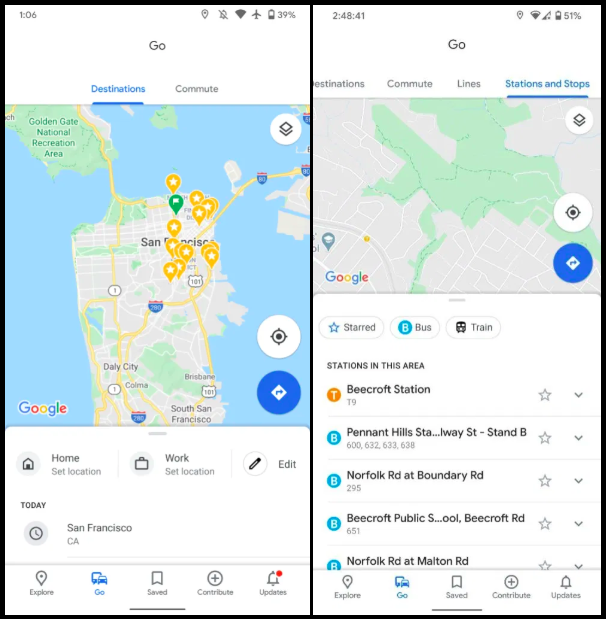 Until recently, users creating Google Posts could only upload one image or one video per Post, but Google now allows you to add multiple images or videos. You can also crop images after uploading them.

There are some limitations, however. In testing the new feature, I am seeing a limit of one image only for Product Posts, whereas Offer, Event, and What’s New Posts permit 10 images. The images appear in the Post in a carousel format; you can click and drag (or swipe on mobile) to scan through the images.

In a new blog post, Kevin Reece, Director of Product at Google Maps, outlines the various ways user contributions improve the quality of the Google Maps product. Reece notes that 120 million Local Guides in 24,000 towns and cities have helped Google add information about wheelchair accessibility for 50 million places around the world, in addition to many other data improvements for businesses, roads, and addresses.

Reece also claims that Google works vigilantly to remove inappropriate user contributions, most of which are flagged before they reach publication. He describes an automated detection system, assisted by humans, that looks for signs of fake reviews and other fraudulent content. Noting that Google receives 20 million user contributions every day, Reece shares some statistics about fake content removed in 2019:

Despite the high volume of removals, Reece says, “The vast majority of contributions made to Google Maps are authentic, with policy-violating content seen less than one percent of the time.”

The digital transformation of grocery stores in the US

McKinsey & Company has released a new report, “Digital disruption at the grocery store,” that highlights five trends impacting US grocery stores in the digital era. These include (1) competitive pressure from early digital movers like Amazon, Walmart, Instacart, and Kroger who are establishing online ordering and delivery as customer expectations; (2) the advantage to be gained by innovating and becoming the market incumbent as new grocery models emerge; (3) finding economies of scale by combining traditional store operations with digital services like online ordering; (4) finding ways to employ automation and robotics to reduce operating cost; and (5) organizational changes like naming a chief digital officer, creating a coherent digital strategy, and appealing to a millenial workforce.