If you find it hard to keep up with new releases and feature changes in Google’s suite of local products, you shouldn’t feel bad. The pace of these updates in recent months has been remarkable, even by Google’s standards. So I thought it would be useful to touch on a few Google updates some Brandify clients have recently asked us about. These are not necessarily brand new features, but they still deserve a spotlight, especially if you missed the news when they were first released.

Though this feature was first reported back in July, we’re still hearing from clients who are seeing it for the first time, meaning that Google is rolling it out very slowly. What to look for in your GMB dashboard is a new table in Insights called “Queries used to find your business.” We’ve included a screenshot below from our client Greystar. 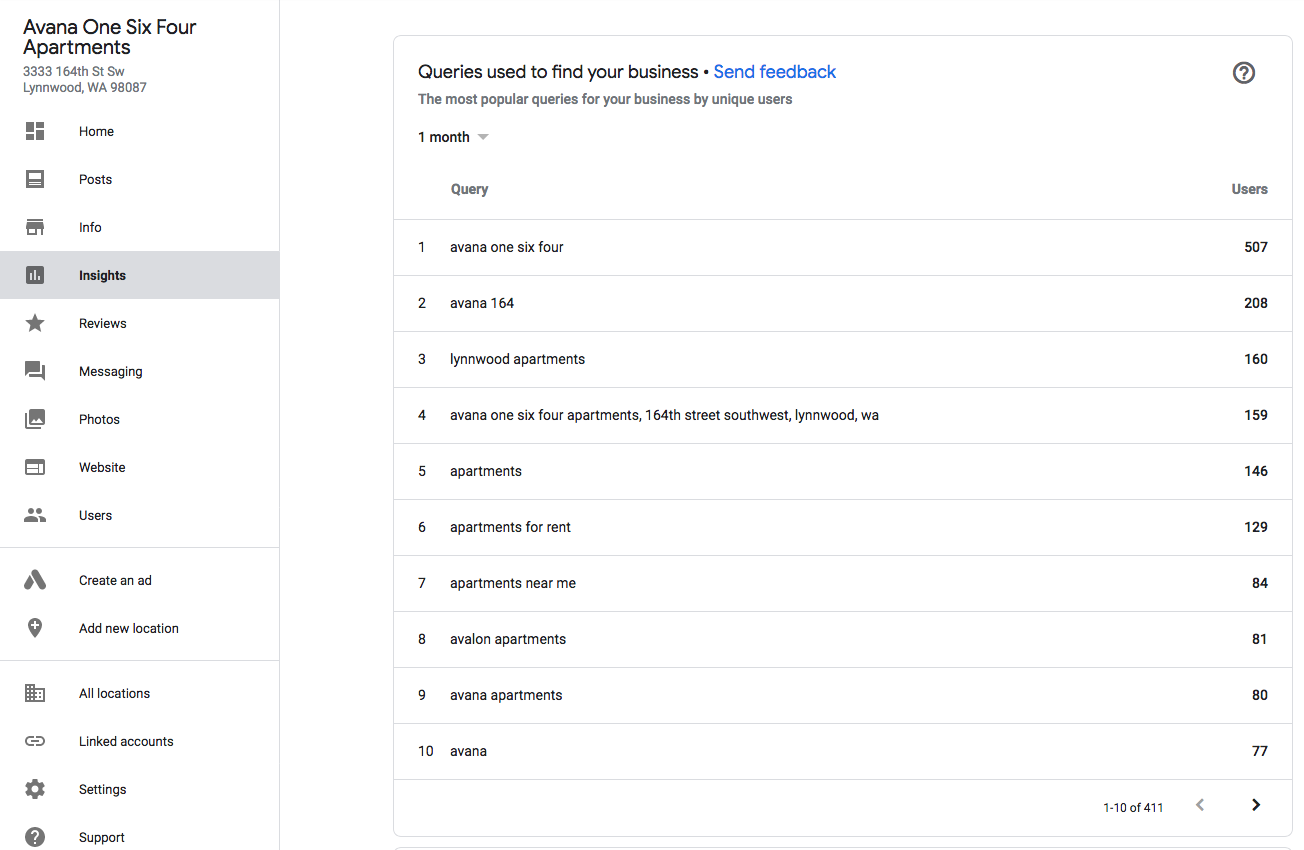 By default, Google shows you popular query terms for the last month, with a count next to each term indicating the number of queries. You can switch from last month to last week by selecting that option in the dropdown menu.

Google explains the feature in its help documentation like this: “Search queries show you the queries used to find your business on Google. In the Insights tab, you can track common terms and search trends for your business. These queries should help you create better Posts with Google and even Ads to engage your customers.”

I would add that search queries should also help with local and organic SEO, by providing insight into the actual words consumers use to search for businesses like yours. So far, this Insights report is only available in the dashboard; it has not yet been added to the GMB API.

We’ve had some clients recently report that they received beacons in the mail from Google at one or more of their business locations. The Project Beacon program from Google has been running for a while, but it’s not very well known, so receiving a beacon out of the blue will likely come as a surprise to many businesses. Here’s what the project is all about.

Project Beacon is Google’s initiative to get businesses to install beacons at their locations in order to provide Google with more information about visitors. The help page on this topic explains that if you are chosen for the project, Google will mail you a beacon with instructions, but it’s up to you whether you want to participate.

Ohhhh got a Google Project Beacon today at work! pic.twitter.com/4cRNSQj85r

Beacons -- small one-way transmitters that can send signals to a consumer’s phone -- help Google confirm that a user has visited your business location. Having a beacon makes it more likely that Google will ask users to rate you and share information about your business. Google also uses store visit data to create the "Popular times" bar chart that shows up in some listings, and to report on the average time people spend at your locations.

In addition, Google has stated that beacons can make your business “more visible to customers with mobile devices.” How they do this isn’t quite clear, but they suggest that users who have their Location History turned on in Maps will more likely see your business as part of their record of store visits.

Google also says that beacon users will get access to “more features as they become available,” meaning that some as-yet-undetermined benefit may be on the horizon. As of now, there are some pluses and few minuses to joining the beacon program. I see no reason not to give it a try if you’re invited.

Google did a big purge of reviews with no named author back in May and June of this year. These reviews existed largely as fallout from the de-localization of Google Plus, a complicated story I won’t go into here. But you’ll probably remember that many Google reviews used to appear with the name “A Google User” in place of an author’s name. The reviews with “A Google User” in the author field are the ones Google removed.

Google decided these reviews were of negligible value, and must also have recognized that the explosive growth in new Google reviews over the last couple of years meant they could afford to lose some of the old ones.

Does this mean no reviews currently in publication have “A Google User” as the author? Not necessarily. The May-June purge was significant but not comprehensive. As far as the impact of this change for brands, it did reduce overall review counts and will have had a small effect on average rating, for better or worse.

But it’s important to keep in mind that most anonymous reviews were somewhat dated, and that overall review volume for Google reviews is up significantly. Stay tuned for an upcoming study from Brandify and Street Fight where we’ll cover that trend in more detail!

Can Apple Maps Catch Up to Google Maps with iOS 10?