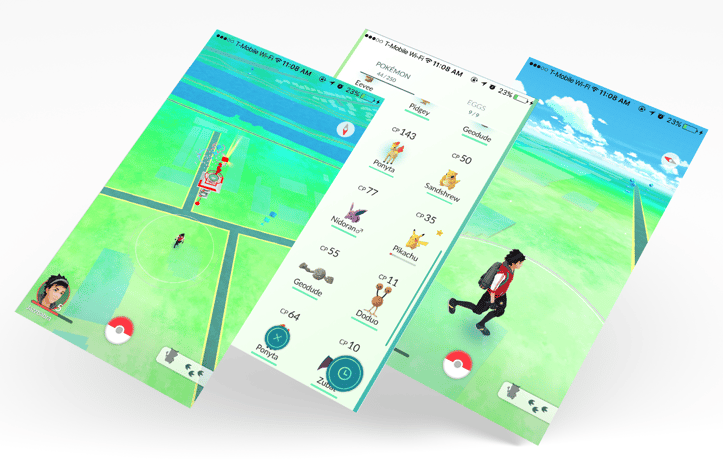 The release of the Pokemon Go app last week has had millions of users walking around with their phones held in the air, trying to catch Pokemon and participate in battles ,earn points and win medals. With 7.5M downloads at just over a week old, the geographically-based augmented reality game provides a huge opportunity for multi-location brands. Pokemon Go is only the beginning of AR, and it’s clearly taking off. Is your brand ready to interact with users at the local level?

How It Works
Based off the 20-year-old Nintendo game, Pokemon Go was created by Niantic and the Pokemon Company. A testament to the success of augmented reality, the game uses a player’s real geographic location to create a virtual map where Pokemon may or may not be roaming about. Players are incentivized to use their immediate location to interact with the game’s geographic features. In order to capture Pokemon dominate the game, users must search for Pokemon in places such as their neighborhood, local stores and restaurants or even schools.

The physical location of Pokemon characters was actually determined before the game was released, but that hasn’t stopped the most zealous players from invading storefronts and wandering through malls in an attempt to find nomadic Pokemon creatures wherever possible.

Make the Most of the Hype
With the onrush of Pokemon Go players bringing more foot traffic to stores, some businesses have made it clear that Pokemon are for paying customers only. Yet, others have embraced the hype, welcoming the mere chance for an in-store purchase, while the most proactive brands have found ways of luring customers to their location by integrating their business into the fun.

One popular method has been the use of lure modules to attract players to locations. Lure modules can be purchased in packages for a small fee and last for 30 minutes apiece with no limitation on how many lure modules can be used back-to-back. Others have become even more creative, using their place of business to host gym battle tournaments and offering a discount to the victors. With multiple players fighting for the championship, businesses can attract an array of potentially paying customers while offering a discount to only a handful.

The Future of Local AR
As with any new technology, the mania surrounding Pokemon Go will likely be short-lived. Some businesses will profit by interacting with the mania, and others will find it difficult to find common ground with this particular phenomenon. What will remain long after the buzz around Pokemon Go plateaus, however, is the proof that augmented reality is here and it’s bigger than anyone ever anticipated. With the AR/VR market expected to hit $150B by 2020, Pokemon Go will not be the last location-based AR game – will your brand be ready for the next one?

Before customers can make it to your store to interact with your brand at the local level, they need to have access to accurate location data to help them get there. Mobile-optimized and socially integrated location data is a must for users where they are and making the online-to-offline connection.

Is your brand’s location data,consistent, accurate and syndicated? Find out your Brandscore by utilizing our free brand scan below.