Happy New Year! In this week's Monday Memo, learn about reporting from the New York Times on location data from 12 million phones; gains in 2019 holiday sales; and several new and experimental features in Google's local listings.

The ongoing Privacy Project series from the New York Times has produced a new study based on a location dataset acquired by Times reporters that contains more than 50 billion location pings from 12 million phones, collected during several months in 2016 and 2017. In a series of reports, the Times has demonstrated that the supposedly anonymous location signals in the acquired file can be associated with specific individuals very easily.

As an example, reporters were able to track the movements of a Secret Service agent assigned to President Trump as the agent traveled to and from Trump's Mar-a-Lago Club in Florida. An expert quoted in the Times's reporting claims that location data is second only to DNA in terms of its ability to capture patterns unique to an individual. The report emerges just as California's new privacy regulations are about to become law and federal privacy proposals are being debated in Congress.

MasterCard is reporting that holiday retail sales, excluding auto sales, increased 3.4% over the previous year, with online sales up 18.8%. The increase occurred despite the shorter shopping season caused by an unusually late Thanksgiving holiday. Though online sales posted impressive gains, they still only represented 14.6% of all retail sales, with offline retail taking the remaining 85.4%. Apparel, jewelry, and electronics were among the categories that saw notable growth. The report covers the period from November 1 to December 24.

Google is automatically creating posts with your photos

Users are reporting that Google has begun automatically creating posts in business listings using photos uploaded to the listing. In a GMB forum thread, Joy Hawkins reports that this is in fact a new feature that Google is testing out. The posts look similar to those created intentionally by users, with a few subtle differences. There have been complaints that automatically created posts are difficult to delete, though one forum contributor claims you can do so via the Google Maps app.

Valentin Pletzer has captured some screenshots of an odd interface test where Google is displaying tile-like buttons in listings on the local pack, not only for features like click to call but even for photos, which are shown with more-rounded-than-usual corners. No word yet on whether this experiment has been seen by others. 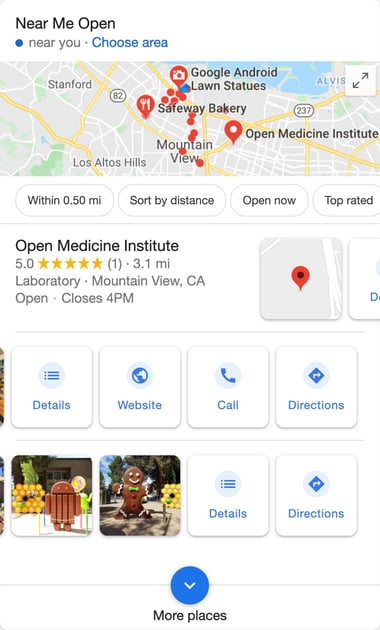 Rich Owens on Local Search Forum noted a feature that may not be brand new but is news to me, and apparently pretty common as I was able to reproduce it easily (see below). When you search for a service provider on mobile and trigger a local pack, Google is now showing a blue "Choose area" link at the top of the pack. Tapping on the link takes you to a popup that suggests areas nearby based on your current location. When I tried this for "arroyo grande landscaper," I got several suggestions, including nearby towns and even parts of a town indicated by the street. One tap lets you refine your search by the area you've chosen.

Sergey Alakov has noticed a "Browse by photos" call to action at the top of the local pack on mobile. If you recall, a few months ago Google started showing a special card-like "Browse by photos" feature further down the page in mobile results which invited users to click through to a gallery of photos from business listings. Presumably this new, more prominent link takes users to the same place. The new feature may be a signal that the first version of "Browse by photos" was successful enough for Google to increase its visibility.

In another find from Sergey Alakov, Google is showing a blue icon in the local pack for some listings in Toronto, indicating that the listing is "top rated" or "#1 rated" by Google users. Though this sounds similar to the "Local Favorites" program announced some months ago, that program is still isolated to New York, Chicago, and Los Angeles, and businesses listed as Local Favorites, such as this coffee shop in New York, don't appear to have any special markings indicating their status.