The survey asks respondents to rank the factors that have the greatest influence over ranking in the Local Pack and Local Finder and in local organic results. For Local Pack/Finder ranking, the report finds that Google My Business information (business name, categories, and so on) has the biggest influence at 33%, followed by reviews at 16%, on-page SEO and links tying at 15%, behavioral signals at 8%, citations at 7%, and personalization at 6%.

As illustrated in the graph I’ve included here, these results mark a notable shift from previous years, continuing a trend that began in 2018. Google My Business and review signals have gained significantly in importance, while citations, on-page signals, and personalization have diminished. 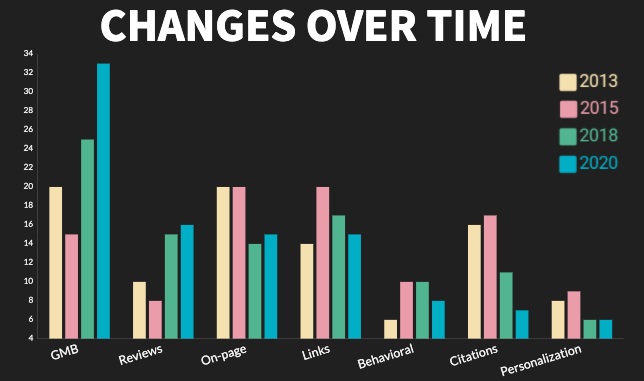 For local organic ranking, the report finds on-page factors and links to be the most important factors at 32% and 31% respectively. As with previous reports, the 2020 edition goes on to rank specific factors in order of their influence, naming the top 15 ranking factors for Local Pack/Finder and local organic. The top three factors this year for Local Pack/Finder are primary GMB category, keywords in business title, and proximity of address to the point of search. Keywords in Google reviews jumps from #14 in 2018 to #7 this year, and appearing for the first time, additional GMB categories makes a strong showing at #5. Appearing for the first time as a top ranking factor, removal of spam listings through spam fighting is #9 on the list. As for local organic, quality/authority of inbound links to domain ranks first this year as it did in 2018, while volume of quality content on entire website makes a big leap from #11 in 2018 to #2 this year.

Shaw’s presentation was a preview of the full report which will be published, he said, in the next couple of weeks.

Acknowledging a pandemic-related spike in interest from consumers for researching online before shopping offline, Google has announced some updated features in Google Shopping, including a more prominent “nearby” filter indicating local availability of products, as well as a new card display for local stores that highlights features like curbside and in-store pickup. These attributes are apparently being picked up from the GMB profile for the store that carries the product. Google’s updated display of Google Shopping results resembles the Local Pack, with a map at the top and a short list of results underneath.

Last week, on Tuesday the 15th, Apple announced at its hardware event that updated versions of its major software platforms would be released the next day, far earlier than Apple’s typical release schedule. This included iOS 14, which was unveiled to the public on Wednesday. Despite prior reports, however, the initial release of iOS 14 does not include ratings and user photos in Apple Maps.

There are a few Apple Maps updates included in the iOS 14 announcement. These include routing information for cyclists; routing for electric vehicles with the automatic addition of charging stops; recommendations for places to visit provided by third-party Guides; display of congestion zones in major cities; the rollout of updated maps in Canada, Ireland, and the U.K.; the ability to refine location in urban areas with poor GPS signals; indication of speed cameras and red light cameras on your route; and a feature that helps users in China navigate geographical areas restricted by license plate.

Apple hasn’t indicated when or whether it will release ratings and user photos for Apple Maps, but it’s safe to speculate that these features may be seen in future iOS updates.

A guide to TikTok for businesses

Connie Benton has published a new guide to TikTok for businesses on Search Engine Watch. Benton notes that TikTok has 800 million global active users and is the seventh most popular social media platform. Businesses who want to appeal to the Gen Z demographic should be especially interested in how to use TikTok to their advantage. The app offers numerous ways for businesses to engage with users, including infeed content ads, branded hashtag challenges, brand takeovers, and partnering with influencers. Brands interested in marketing on TikTok need to conform to its short video format and understand the interests of the TikTok user base. Studies show that TikTok users are largely interested in entertainment, dance, pranks, fitness and sports, DIY videos, skincare reviews, makeup tutorials, and fashion reviews.

A widespread bug in Google My Business halts Photo Insights data after August 31. As shown in the screenshot below, Photo Views goes to zero after August 31 where the bug is present. So far there is no word from Google about the cause of the issue or the ETA for a fix. According to reports, the bug is widespread and may impact just about every category and geography Google covers. 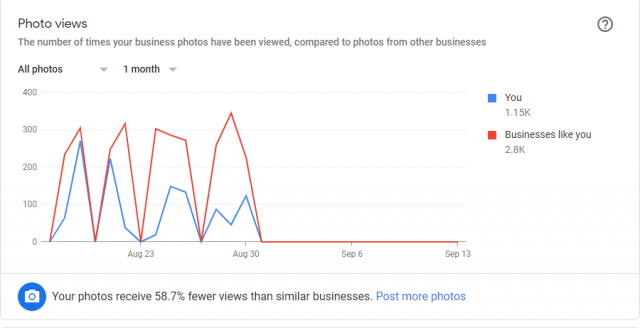 Emojis showing up in Google review attributes and search results

As first noted on Twitter by Ben Fisher, Google has begun displaying emojis next to review attributes in Google My Business. Review attributes are terms highlighted by Google as being especially pertinent in reviews. In some cases, Google asks users to rate the business according to these attributes. The new emojis may add to the communication value of these attributes by offering a visual counterpart to the text.