A new infographic from research firm MFour claims that ecommerce has seen unprecedented growth in the first six months of 2020, largely as a result of shifting consumer habits during the coronavirus pandemic. In fact, MFour claims that ecommerce has seen ten years of growth in six months, basing its conclusions on its own data as well as research from Bank of America, the U.S. Department of Commerce, and ShawSpring Research.

For the past several years, ecommerce revenues have experienced steady growth while still being dwarfed by offline sales in traditional brick-and-mortar stores. For instance, I noted in last week’s post that online grocery sales, though surging in popularity, still make up only about 10% of all grocery sales in the U.S.

MFour makes a bolder claim, suggesting that online sales have jumped from 16% of all U.S. sales in 2019 to 27% in 2020. These numbers are higher than the Department of Commerce’s official estimates, but if accurate, they underline not only the increasing importance of online-only retailers but also the need for brick and mortar retailers to create seamless connections between online and offline shopping. 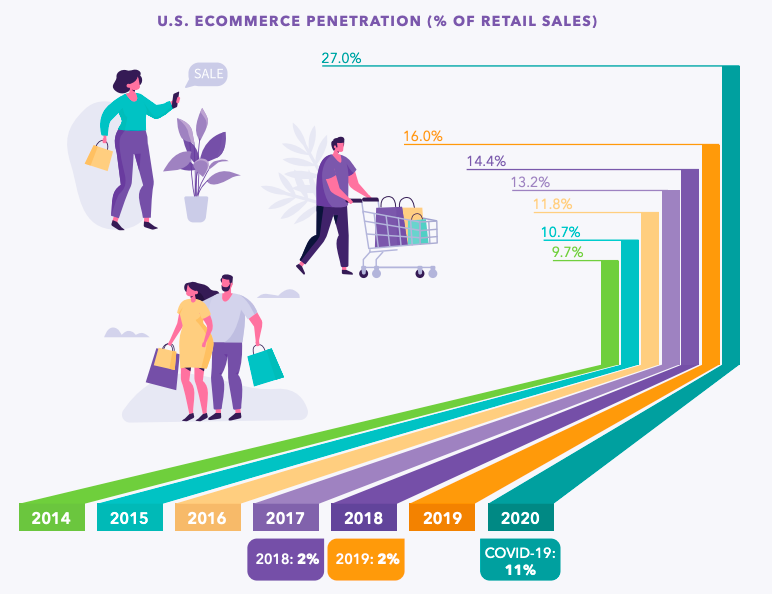 As I first saw in a tweet from Jason Brown, Google has begun displaying a reminder to wear a mask in the Google Maps interface. This appears to be a test, as I could replicate it easily a few days ago and now I cannot. 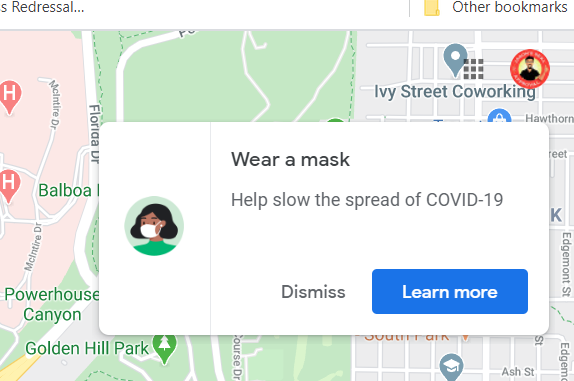 The “Learn more” button leads to an expanded view that offers a list of safety tips to help stop the spread of COVID-19. Google has been displaying similar reminders and health advisory information in its general search page and elsewhere for some time; the addition of the alert in Maps is possibly designed to remind consumers who may be navigating to a nearby business that they should bring a mask with them and practice social distancing.

Google notifying users when listings are suspended or marked as duplicates

Google has begun sending email alerts to listing owners when a listing is suspended or marked as a duplicate. The suspension notices, according to Greg Sterling in Search Engine Land as well as Ben Fisher, who broke the story, are being sent as a result of a new European law that requires such notifications, presumably due to the significant loss in revenue that suspensions can cause. Suspensions mean that a business may no longer appear in search at all, or may be unable to update its listing. Suspensions are done in an attempt to catch listing spam, but legitimate businesses who are improperly suspended can apply for reinstatement.

Just after the news broke about suspension alerts, a post on Local Search Forum observed that alerts are being sent when a listing is marked as a duplicate of another listing.

Two weeks ago, I reported that an update to the Google My Business help documentation suggested a post or alert would be created when a business updated its hours. At the time, I was able to see evidence of an hours update in the Posts page in the GMB dashboard, but couldn’t find any update displayed to the public. Now, the public version of these alerts are finally being noticed, as reported by Barry Schwartz in Search Engine Roundtable.

The example cited in Schwartz’s article comes from Casey Bryan, and shows the Knowledge Panel for Progressive Rehabilitation Group in Warragul, a town in Australia. A notice underneath the business’s hours of operation reads “Updated by business 2 weeks ago.” The help page suggests that a post will also appear in the Updates tab in mobile devices, but this doesn’t appear to be happening yet. 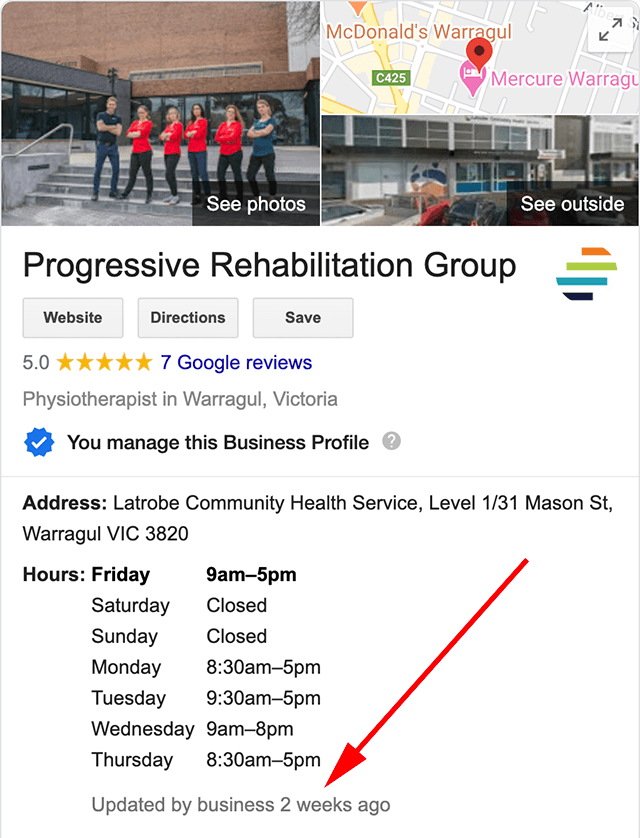 Yelp has taken a different approach to highlighting recent updates in business profiles, as noticed in the wild by Brandify’s Gretchen Vogel. Updates to hours related to COVID-19 are reflected directly in the page title for relevant profiles, meaning that search results display these updates prominently even before the user clicks through to the relevant Yelp page. 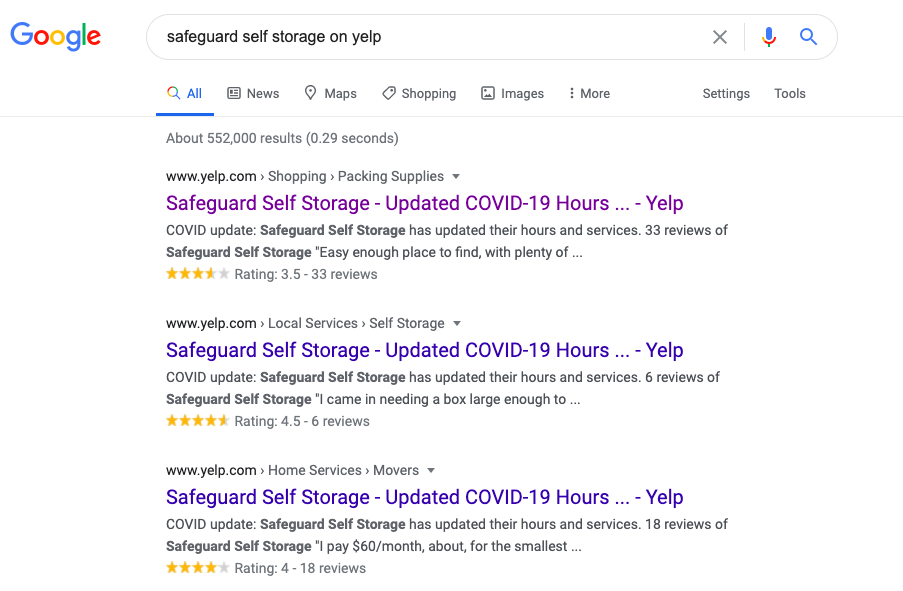 Yelp’s decision to showcase updates in the page title for business profiles is likely driven in part by the company’s awareness of its prominent place in Google organic search results. As noted in the very first Monday Memo in July 2019, research shows that 92% of the top five local organic results in Google search are links from Yelp.

“Core Web Vitals” will be Google’s next big ranking factor, AMP to be retired

As discussed by Cyrus Shepard in last week’s White Board Friday on the Moz website, Google anticipates rolling out an important new component of its general search algorithm in 2021, known as Core Web Vitals. Shepard explains that Core Web Vitals are “real-world experience metrics” such as page load speed, interactivity, and stability. This new set of metrics belongs to a larger group of factors, called Page Experience metrics, that are separate from the text on a web page. Other Page Experience metrics include mobile friendliness, HTTPS, and presence or absence of intrusive popups.

Shepard notes that traditional Google ranking signals focus on the content of a page; but more and more, Google is now turning to measurements that indicate the overall quality of the user experience. These factors are especially important on mobile, where poor user experience can sometimes make it difficult to access a page’s content.

The rollout of Core Web Vitals is expected to happen sometime in 2021, and Google says they will give 6 months’ notice beforehand to give time for webmasters to prepare. Shepard anticipates the impact may be minor for many sites, but well-optimized sites may stand a better chance of outranking their competitors.