In this week’s update, learn about the delayed demise of third-party cookies; the strange case of vacation rentals in Google Maps; justifications in local search; getting the most out of Google Posts; new Insights reporting in Google My Business; and new Google filters for reviews and products.

Google has announced that it will delay the phase-out of support for third-party tracking cookies in the Chrome browser to late 2023, after making a huge splash in 2020 with the news that support would be discontinued in 2022. The delay is likely due to an uproar from brands and advertisers who rely on third-party cookies to track user behavior on desktop devices and to improve the relevance of ads served to those users. Google’s proposed alternative solution, known as Federated Learning of Cohorts or FLoCs, has come under fire as an inadequate alternative that grants more power to Google itself, at a time when the company is already being subjected to scrutiny from multiple governmental entities in the U.S. and abroad for allegedly monopolistic practices.

The delay in the demise of cookies grants Google and the advertising community alike a bit more time to figure out where things will go from here, but should not be taken as an indication that the movement toward increased privacy controls is going away. Google says they are merely “allowing sufficient time for public discussion on the right solutions and for publishers and the advertising industry to migrate their services.”

The strange case of vacation rentals in Google Maps

Tim Capper has an informative blog post that explains an anomaly in Google Maps that may confuse folks in the local search community. Capper’s post has to do with the appearance in Maps of listings for vacation rentals, even though the GMB help documentation says that these types of businesses are not permitted to have a listing. Among the business types not eligible for a listing, Google includes the following: “Rental or for-sale properties, such as holiday homes, show homes or vacant apartments. Sales or leasing offices, however, are eligible for verification.”

Yet despite this rule, it’s easy to find vacation rental listings in Google Maps. The reason for this, Capper explains, is that Google Travel uses parts of the Google My Business platform to create listings for vacation rental properties, so that these properties can be displayed as Google Travel results. Also, at some point in the recent past, the Google Maps team apparently allowed travel agents to upload all of their vacation rental properties to Maps via the Online Travel Agents API. This was done in order to create more inventory for Travel Ads, but the initiative has since been discontinued. Attempts to claim these vacation listings may or may not succeed, given that they’re officially not allowed.

The whole story is just one more example of the fact that Google My Business is not a discrete, impervious entity but rather a set of services that is interconnected with many other parts of the Google ecosystem. 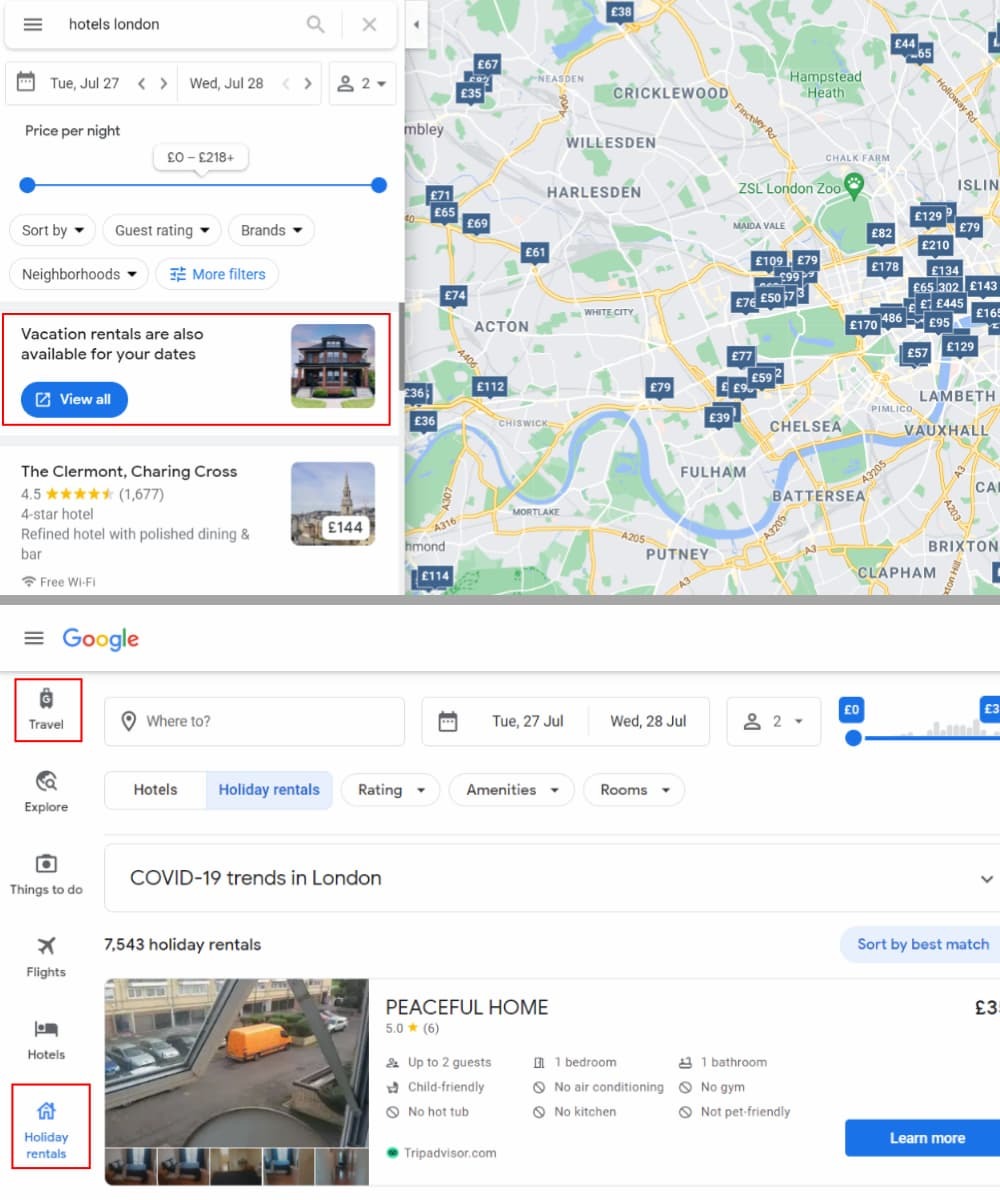 A guide to justifications in local search

Another useful recent piece from Tim Capper covers the subject of GMB justifications, a subject we’ve been hearing a lot about recently -- for instance, just last week I reported on a new “Seen by shoppers” justification appearing for retail searches. Justifications, you’ll recall, are snippets of text associated with a particular source that are shown to users in the local pack in order to reinforce that this particular listing may have what the searcher is looking for.

Capper’s piece lists all known sources of justifications at this point (with the notable exception of the brand new “Seen by shoppers” whose source is the Google user community):

The post goes into detail on each of these items and how to optimize for the ones you can control. Justifications, in short, should be another target of both onsite and GMB optimization, given that Google is expending so much effort lately to provide these useful snippets to consumers.

Getting the most out of Google Posts

The latest Whiteboard Friday post on the Moz blog comes from Joy Hawkins, who offers 7 tips to help us get the most out of Google Posts. Hawkins notes that COVID-19 posts, due to their special placement near the top of the business profile, are among the highest performing post types in terms of visibility. The average click-through rate for Posts, according to her research, is 0.5%, meaning you need about 200 views to get one click. For those tracking Post activity using UTM parameters, Hawkins notes that numbers in Google Analytics are calculated differently than GMB and will never match, so it’s best to choose one metric and stick with it.

Hawkins also mentions justifications -- I told you this topic has been heating up lately -- noting that getting justifications in the local pack is one of the main reasons Posts are valuable, but in order to be eligible for justifications, Posts must be no more than 60 days old. Hawkins says her research showed that seasonal posts (holiday-themed, etc.) did not perform well, but posts with emojis did. Finally, she notes that the generic “What’s new” Post type, which she calls Updates, used to disappear after 7 days, but these Posts now stay live for about 6 months.

According to a Twitter post from Lluc B. Penycate, Google is testing some new Insights reports. One of them, I believe, is a display of the most popular time at your location on a given day. I say “I believe” because the bar chart that displays traffic by time of day is itself not new, I don’t think -- the same chart that users often see in public business profiles has also been displayed in Insights for some time. Here’s an example from one of our client’s listings. I think the new part may be “Your most popular time is around 12:00 PM on Saturday” but I’m not 100% sure on that. 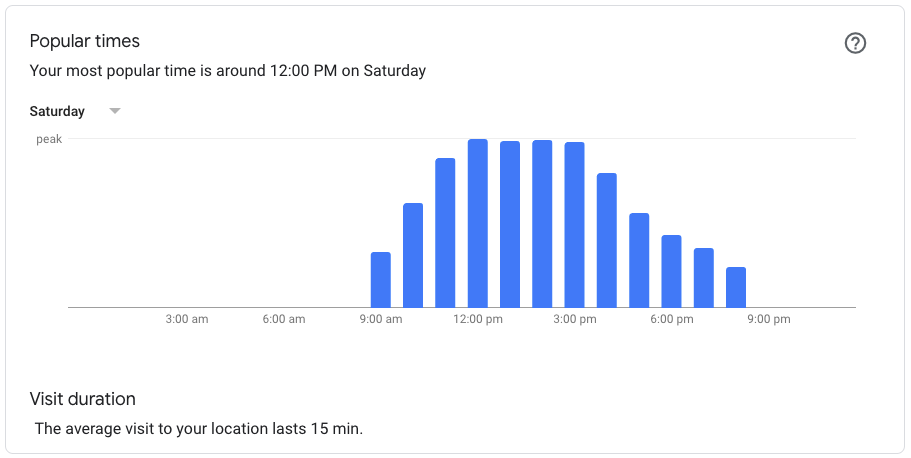 The other chart discovered by Penycate is definitely new and I don’t see it on my end yet. His example is in Spanish but I believe the title means “What your business is known for,” and the chart lists items like “Informal,” “Ideal for children,” “Popular with tourists,” “Ideal for groups,” and so on. The subheading reads, I think, “Your score on the main attributes that help customers decide where to go.” So this appears to be a score-based system, on a scale of 0-100%, that uses input from users to gauge your business against popular deciding factors. The factors look very similar to the prompts Google often shows users when asking for feedback about a business. 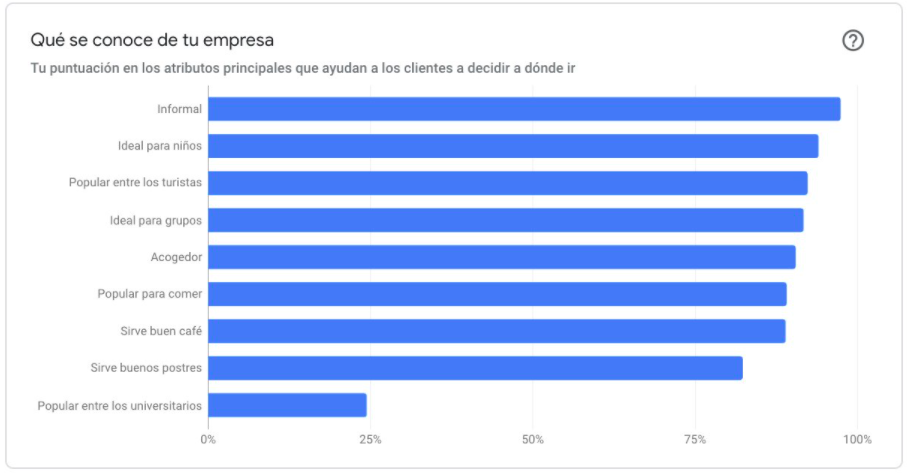 Finally on the topic of Insights, many users may see a notice in GMB these days that reads, “Insights data may be missing or delayed due to reporting issues. There is no impact on the appearance of your business on Google.” No further news about the reason for the delay or the timeline for resolution -- as Barry Schwartz notes, it’s unusual enough that Google would post such a notice in the first place, but good to be aware of in case your business is impacted.

Two final items this week which, though otherwise unrelated, both have to do with filters in Google products. The first item was noticed by Claire Carlile, who shared on Twitter that Google appears to be experimenting with smiley faces in Place Topics to indicate the overall sentiment for a particular term. Place Topics, of course, are the popular topics that appear at the top of the Google reviews feed. In Carlile’s screenshot, certain topics include a smiley face while others do not, perhaps suggesting that Google is more interested in calling out what people like than what they don’t. 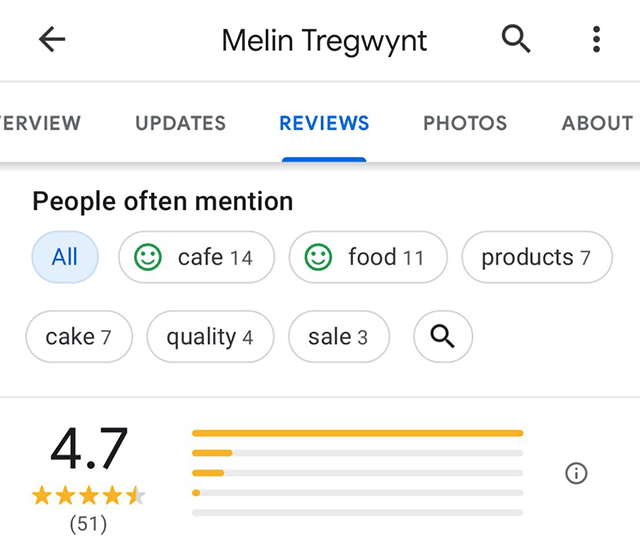 The second item relates to product searches, and was shared on Twitter by Ryan Mews. Mews shows that in searches for products like “camo backpack,” Google shows a filter bar that allows the user to refine the search by products available specifically from Amazon or Walmart. For “phalanx concealment,” further options, including Etsy, are highlighted, as well as a filter choice that lets users specify nearby stores where the product may be available. These filters are not live yet for all users.