Google has launched a new, free service called Video Maker that creates a short video for your business based on a few inputs from the business owner and content from the business’s GMB profile. The Video Maker wizard walks the user through the process of creating a series of taglines with prompts like, “How would you describe your business in five words or less?” and “What makes your business special or unique?” A video is then generated that incorporates photos, videos, and positive reviews from GMB, as well as highlights from business attributes such as “Wheelchair accessible” and “Identifies as women-led.”

After viewing the initial results, you can edit the video, adding new photos and changing the layout, music, and color scheme. You can download your video, upload it to YouTube, or add it to your GMB profile. Video Maker is an extension of Google’s Marketing Kit, which has previously offered businesses free window clings, posters, and other marketing materials.

We reported in October that users were spotting a new Call History feature in the GMB mobile app, giving business owners access to a log of recent phone calls with details such as date of call, phone number, and call duration. Though the feature set was simple, it seemed as though Google was making an initial foray into call tracking, which could have significant implications.

Now users are spotting Call History in the GMB desktop interface. So far, the screenshots that have been captured by users such as Justin Sanger and SeoAllie don’t tell us much, apparently because the feature hasn’t yet gathered enough call data to fully populate its reporting. But it appears that the Call History tab will include a date picker, a tally of answered and missed calls, and a history table presumably containing recent call details.

Google has, of course, been reporting on volume of inbound phone calls for a long time, but the addition of data about how these calls were handled is new, as is the tracking of individual call details. 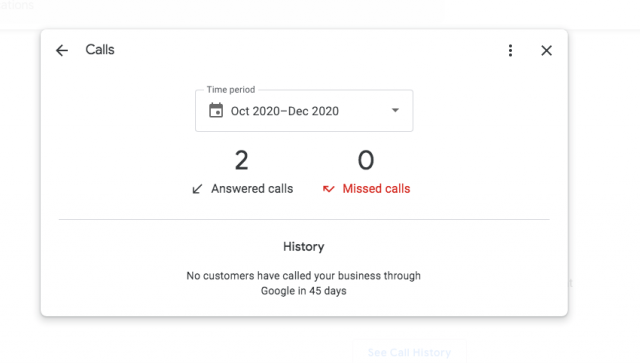 Whitespark’s Darren Shaw has finally released the official version of this year’s Local Search Ranking Factors study, after previewing the results back in September at Whitespark’s Local Search Summit. This is the first update to the long-running study, founded by David Mihm in 2008, since Shaw’s last version in 2018.

In Shaw’s writeup on the results of the survey, he notes that the major news items for Local Pack / Local Finder ranking are the continued rise of GMB factors and the decline of citations. As far as GMB factors are concerned, Shaw notes that only some factors have a direct impact on ranking, but ranking isn’t the only important measure of success. In fact, the increasing dominance of Google My Business in local search has given rise to a new sub-industry in local that is focused on conversion rate optimization. In light of this, Shaw has added a new question to this year’s survey, asking respondents about the most important factors influencing GMB conversions. Another new survey question asks about the most common local SEO myths.

As we’ve covered previously, several new ranking factors have emerged this year, including spam fighting and secondary GMB categories. The full report is worth reading and contains a lot more information of value to local SEOs. 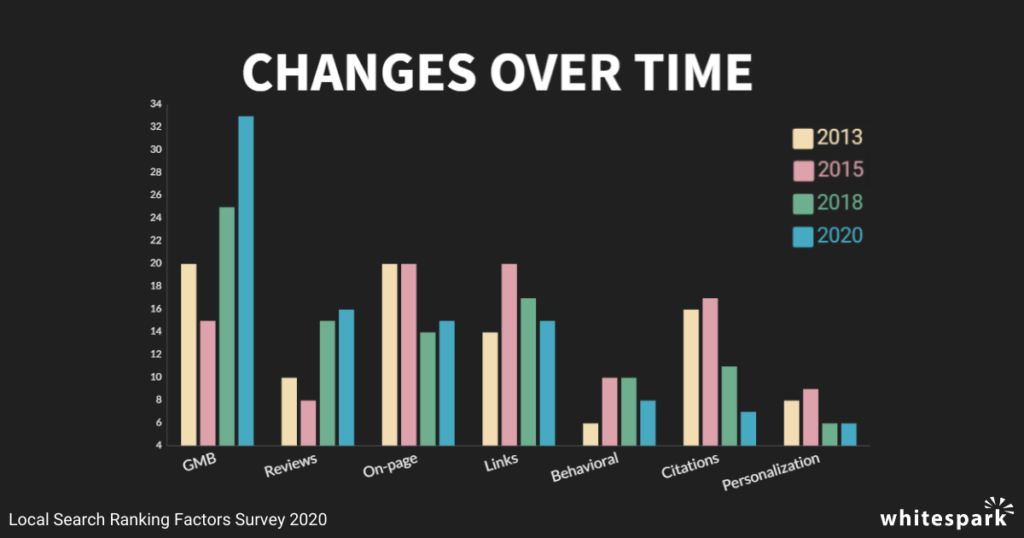 The rise of GMB and the decline of citations, courtesy Whitespark

BrightLocal has just published its tenth annual Local Consumer Review Survey. Since 2010, BrightLocal has reported every year on consumer sentiment about reviews of local businesses. This year, the top findings include the following:

Survey respondents said reviews were most important for healthcare, restaurants, hotels, automotive, and dentists. As for the factors in reviews that respondents cared most about, the top results were overall star rating, legitimacy of the review, recency, sentiment, and review quantity. Some 78% of respondents said that whether the business responds to reviews is an important factor. Google is the most commonly used review source, followed by Facebook, Yelp, BBB, and TripAdvisor. 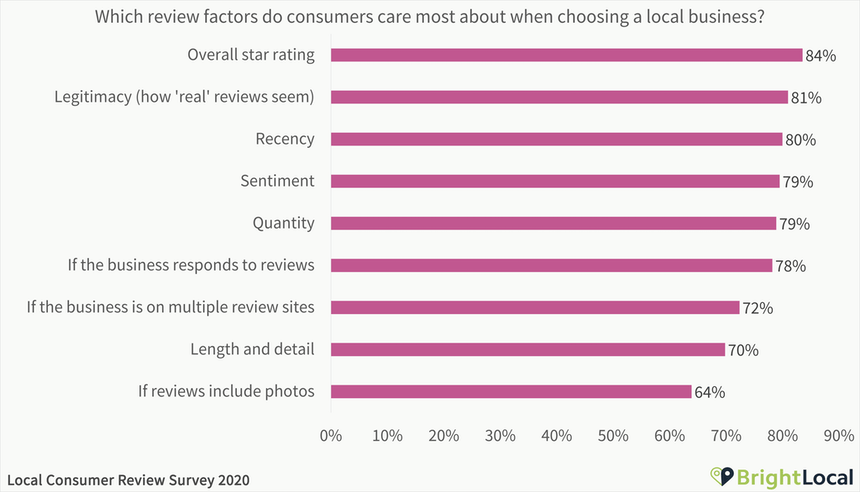 Today, December 21, Burger King is launching an integration with Google that allows consumers to search for the nearest Burger King, order, and pay for delivery entirely within the Google interface. Consumers will be able to use Google Search, Google Maps, or Google Pay to initiate the transaction, with Google Pay users earning 20% cashback on orders of $10 or more.

Google reported early on in 2020 that consumers conducted 5 billion searches for restaurants every month. In light of this demand, Google has been adding features such as the Order Delivery button in GMB and voice-based ordering through Google Assistant. Burger King is looking to capitalize on Google’s established functionality in its attempt to meet increased demand for digital ordering during the pandemic.

Burger King parent RBI, which also owns the brands Tim Hortons and Popeyes Louisiana Kitchen, has also been experimenting with a drive-through only prototype of a new restaurant of the future that features digital displays, predictive selling technology, and contactless payments.

In another attempt to accommodate consumer reluctance to visit stores in person, Google has launched a new feature in Search, live in the U.S. as of last week, that helps consumers try on makeup using AR technology. When users search for a particular lipstick or eye shadow, Google will display how the product looks on various skin tones, and the user will be invited to click a “Try it on” button that applies the makeup to the user’s live image. Google collaborated with data companies ModiFace and Perfect Corp to create the new feature, with support for products from brands such as L’Oreal, MAC Cosmetics, Black Opal, and Charlotte Tilbury.