Google has published a blog post that outlines the company’s approach to flagging and removing fake and fraudulent content from Maps. The post reports that since Google Maps began incorporating user edits 2010, 970 million people have made contributions. To flag bad actors, Google looks for abnormal user activity, such as reviewing a business in Chicago from an account based in Bangkok. Many such contributions are automatically filtered; others are reviewed, Google says, by “trained operators and analysts.”

Google says that malicious contributors fall into two categories: fraudsters and vandals. Fraudsters try to make money from fake reviews and business listings, often utilizing large scale click farms. Vandals are simply trying to make a statement or leave a mark with fraudulent content. Google takes proactive steps when a public issue might lead to vandalism; for instance, blocking edits to voting sites before and during Election Day.

The company shared the following statistics for 2020:

A recent post from Tim Capper shows that website mentions have been added to hotel listings in the hotel version of Google’s local pack, creating a new opportunity for hotels to rank for a broader range of keywords. Though website mentions have been live for other categories for some time, this is their first appearance for hotels. Capper notes the behavior was first spotted in the wild on February 4. 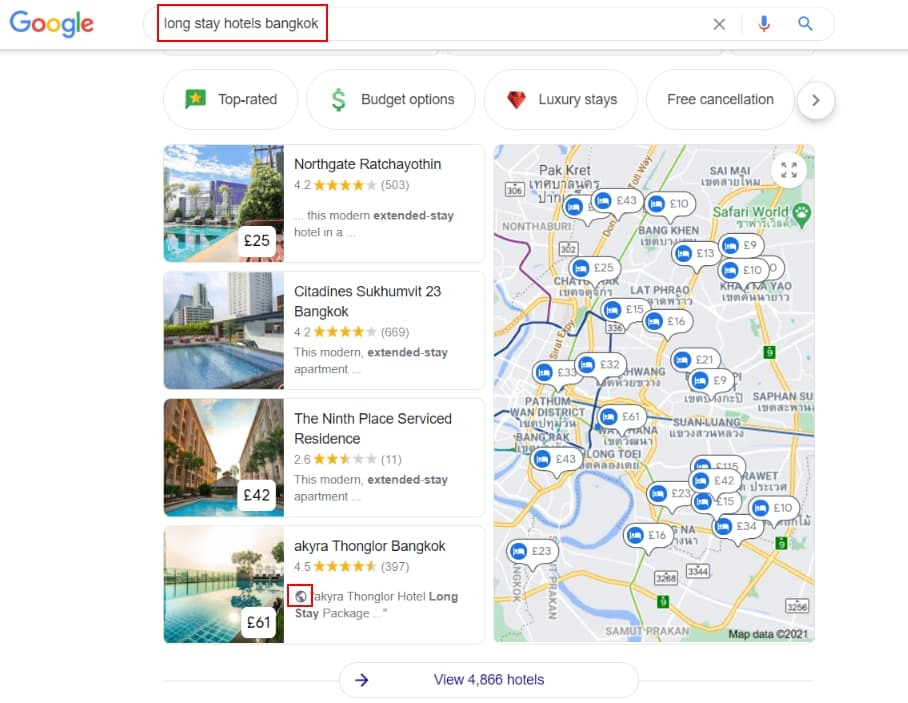 Capper observes that the results seem to be driven by hotel searches containing terms not already prominently displayed as attributes in listings, such as “all inclusive,” “spa,” and “child-friendly.” Because existing attributes will not trigger this result, he recommends creating content on your website for search terms related to your hotel that are not included in the available attributes. Capper also cautions that the feature appears to be rather unreliable at present, perhaps due to its newness, so results may vary.

In a move that brings zero-click to advertising, Google has added lead form extensions to search, video, and discovery ads. The feature is limited to advertisers with at least $50,000 in spend. When enabled, the advertiser’s lead form appears directly in search after the user clicks an ad, and can be filled out and submitted without needing to visit the business website. Upon completion, users have the option to visit the website or return to search.

The feature resembles Reserve with Google in GMB, where users can book appointments without ever leaving the Google interface. Google says the new lead forms are designed to drive more leads, increase conversions, and create more engaging ads.

Google is launching a new, free event series called Search Central Live, with the inaugural event taking place on February 23rd from 4:00 to 5:35pm Pacific time. (The event is actually advertised to be taking place on February 24th Japan Standard Time, as Google has decided to start off the series by catering to Asia-Pacific time zones.) Search Central Live will run as a livestream on YouTube with a recording to be posted there afterwards. During the livestream, participants can post comments and questions for the speakers. Google says it wants to foster a “dialog between Google Search and the broader community of SEOs, developers, and website owners.” Session speakers will include well-known Googlers Danny Sullivan, John Mueller, and Gary Illyes. In one of the three sessions, Google’s Kristina Azarenko and Martin Splitt will analyze a website with a technical SEO problem. You can register for the event here.

Miriam Ellis and Blake Denman have both just shared new guides to local SEO, on the Moz and SEMRush blogs respectively. The Essential Local SEO Strategy Guide from Moz contains eight chapters of information about topics such as Google’s local SERPs, analyzing local markets, analyzing on-page SEO and local listings, developing a reputation strategy, creating a local content strategy, automation, and local search analytics. Denmans’s “Local Business SEO Tips and Tactics,” geared toward small to medium-sized businesses, offers a very comprehensive set of recommendations for optimizing Google My Business profiles and local websites in order to boost leads and conversions. The guide also touches on activities that, according to Denman, won’t help you rank better, such as keyword stuffing in review responses and business descriptions.