In this week’s update, learn about Yelp’s new Waitlist tools; Facebook’s new map; the impact of Core Web Vitals; a possible local ranking update; the source of “applicable services” in Google reviews; and three posts on GMB features that convert.

Responding to a boom in takeout orders at local restaurants during the pandemic, Yelp has launched an update to Waitlist designed to make it easier for restaurants to manage a mix of dine-in and to-go orders. The company notes that searches for restaurant takeout on Yelp have increased by 3,200% since March 2020. Restaurants using the expanded Waitlist functionality will be able to exchange text messages with customers to communicate the status of an order, and can manage lists of dine-in and takeout customers using the Waitlist kiosk or the Waitlist app. Customers can create profiles that include their phone number and dietary information, and can even indicate the car they drive in order to streamline curbside pickup.

How Facebook’s new map was built

An interesting blog post from cartography company Stamen explains how the Stamen team worked as “an embedded team” with Facebook engineers to launch Facebook’s new global base map in late 2020. The map is built on the foundation of OpenStreetMap (OSM), the open source database of geographic features that has been called the Wikipedia of maps, and Facebook has apparently become a major supporter of OSM. The secret sauce added by Facebook engineers, working in collaboration with the Stamen team, include quality control features, building and road data, and another open source dataset called Natural Earth.

The map, which appears in multiple places throughout the Facebook interface, emphasizes “places important for travel” such as airports, “places for gathering” such as parks and museums, and “places on foot” such as sidewalks, trails, and town squares. The new Facebook map is live for most users though not yet on iOS. It appears when users check in to a location, on the About page for local businesses and events, in posts asking for local recommendations, and other places. Previously, most Facebook maps were powered by HERE.

During Google’s inaugural Search Central Live broadcast last week, Danny Sullivan made some helpful comments about the likely impact of the Core Web Vitals update -- also known as Page Experience -- which is projected by Google to go live in May. Sullivan noted that the Core Web Vitals update will be added to several existing factors that determine page ranking, so its impact should be understood in that larger context. Even sites that don’t offer the best experience, Sullivan said, may still rank well if their content is highly relevant to a user’s search. Only in cases where other factors are relatively equal will Page Experience metrics become a differentiating factor. Sullivan also suggested, in further comments on Twitter, that Page Experience might “become a more important factor over time than with an initial launch as a great page experience becomes more common to pages” -- in other words, Google may start more modestly and gradually increase the importance of Page Experience over time.

Barry Schwartz and Joy Hawkins have both written about a possible local ranking update that took place over February 24-25 and that appears to have been accurately captured by Bright Local’s Local RankFlux tool, which tracks ranking fluctuations across multiple business locations and industries. Hawkins writes that she checked for ranking changes in several Sterling Sky clients and saw changes in local but not organic ranking, including cases where businesses are ranking further away from their location than they did previously.

Where do the “applicable services” prompts in Google reviews come from?

Tom Waddington offered some helpful feedback recently in the Local Search Forum about the source of the “applicable services” prompts some users now see when leaving reviews on Google, in particular for service professionals. The user posting the initial question wondered how to make certain terms favored by her business client appear in the listed services, and Waddington explained that only standard service attributes linked to your business categories qualify for inclusion in the list. You can add custom attributes for any business category, but these attributes will not be included in review prompts. What’s more, even if you do not offer a service indicated by one of the standard attributes, that attribute will still show up in the prompts.

As shown in the screenshot below, what we’re talking about here are the terms included in the review composition interface under “Add all applicable services.” These are not the same as the review attributes Google displays above published reviews, which contain popular terms in the reviews themselves. 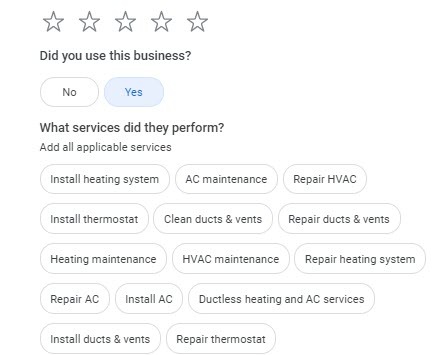 I’ll close this week by calling your attention to three different posts from the last few days that cover various GMB features you can use to help drive more leads and conversions. The first is a deep dive from Darren Shaw of Whitespark on the top 10 GMB conversion factors from the 2020 Local Search Ranking Factors report. You’ll probably recall that the 2020 edition of the report includes, for the first time, a rundown on the GMB factors that drive conversions, such as review count, GMB messaging, GMB booking, and frequency of Google Posts. Here, Shaw takes the time to discuss each factor in detail.

Another compendium of GMB features is covered by John Lincoln, writing in Search Engine Journal. Lincoln writes specifically about features launched by Google during the pandemic that can help your business stand out and appeal to more customers, such as health and safety attributes, online services, and call logging.

Finally, Greg Gifford offers a Whiteboard Friday video on the Moz blog that goes into lots of detail about using Google Posts to gain more customers. Gifford notes that Google Posts have no influence on ranking but, as a form of free advertising that can help your business win more consumer attention, they are worthwhile for most businesses.