Monday Memo: Local Packs Make the Cut as One of Google’s “Most Popular” Features

Two new findings have helped to confirm the increased significance of local results as a component of overall search, a trend that began well before the pandemic, with more and more searches being interpreted as having local intent. The increased reliance of consumers on digital channels of communication since the onset of the pandemic has, of course, only further boosted the prominence of local results.

The first finding comes from Eric Enge of Stone Temple, reporting on results of an analysis of 2.5 million search queries from a single day in July conducted by seoClarity. The analysis ranks SERP features by frequency of appearance in the top 10 search results, with People Also Asked not surprisingly coming in first at 48.40%. What’s more eye-opening is the second-place position of local results at 32.84%, beating out many other prominent SERP features including featured products, images, and news. 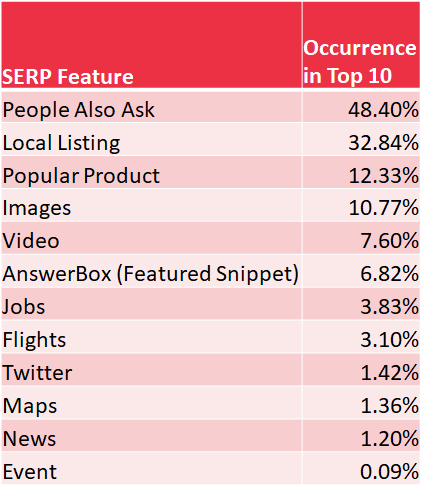 Another study from Milestone Research finds that organic and local SEO are the two most effective channels for digital marketing of local businesses, in comparison with other channels such as referrals, paid search, and social. The study looked at 18 months of sessions and pageviews for 500 local businesses, finding that local and organic search accounted for 70% of all revenue; local actually grew from 21% to 28% during the 18 month period. Local search was found to be especially valuable because of the high purchase intent of the searcher, and the study found that both organic and local SEO are probably underfunded by many businesses in comparison with the ROI they deliver. 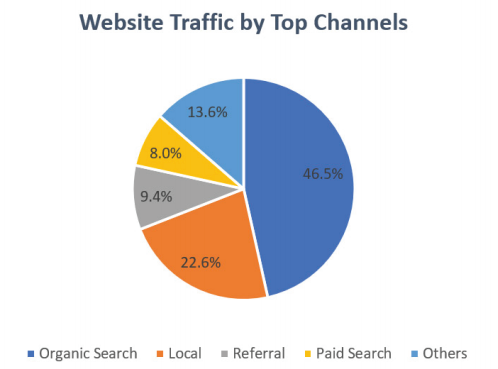 Google My Business disables some categories for service businesses

Service-area-only businesses that hide their address in Google My Business have been denied access to certain Google My Business categories, in a new development shared by Joy Hawkins. Confirmation of this change by Google comes after weeks of reports from local SEOs that categories for service-area businesses (SABs) were either being changed in listings without their consent or flagged with the error message, “Not available unless your business location appears on Google Maps.” According to Hawkins, this move on Google’s part is another facet of its spam-fighting effort, where presumably SAB listings in these categories had such a high spam incidence as to become unviable. Disallowed categories for SABs include (among possible others) auto dent removal service, auto glass shop, auto repair shop, cremation service, pilates studio, RV repair shop, tire shop, and window tinting service.

John Mueller on the distinction between Core Updates and Page Experience

As we know, it’s been quite a summer for Google algorithm changes, with three major updates rolling out and a fair amount of confusion around which signals to pay attention to and what they mean. At least some clarification was offered the other day by Google search spokesman John Mueller, who explained that the two Core Updates released in June and July are not related to the Page Experience Update, which began a slow rollout in mid-June that is expected to last until sometime in August. Though it was predicted to have only a modest impact on ranking, SEOs are reporting that the most significant ranking changes they saw in June and July seemed to be related to page speed, which is part of what Page Experience measures.

Indeed, Mueller seems to have reversed earlier Google messaging which implied Page Experience would be less significant and more of a “tie-breaker.” In his words, Page Experience "is a ranking factor, and it's more than a tie-breaker, but it also doesn't replace relevance."

In related news, Google has announced that safe browsing is no longer a part of Page Experience, suggesting that this factor has in fact never been used as a ranking signal.

The dark theme for Google Maps that was unveiled for Android back in February will be released for iOS by the end of August, according to a 9to5Google report. Google claims the dark theme is better for the eyes when using Google Maps at night, and can also help to save battery life. In addition, Google has announced an integration with iMessage that allows users to share location with each other using Google Maps, as well as new iOS home screen widgets for searching in Maps (“Find places nearby”) and for looking up traffic conditions and business details (“Know before you go”). 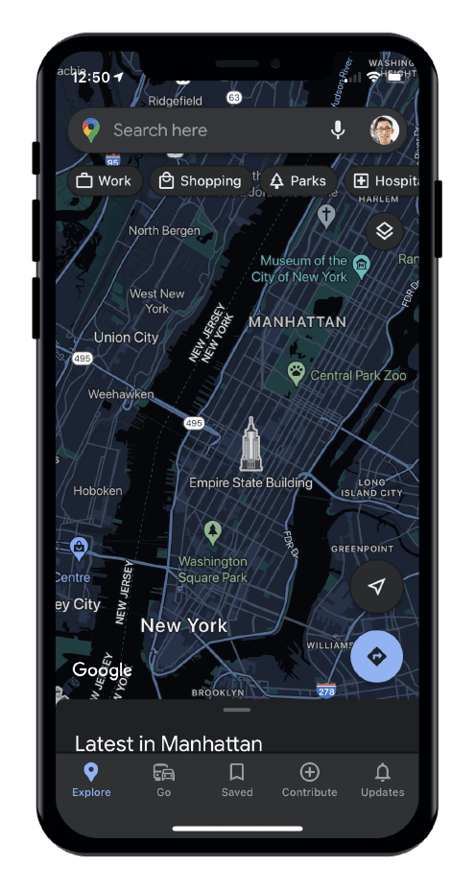 Knowledge Panels are populated based on the nature of queries

Google’s Danny Sullivan provided some insight in a Twitter exchange about the variety of content appearing in Knowledge Panels for authors, in response to questions from local SEO and reputation management expert Chris Silver Smith. Silver Smith pointed out that the well-known books written by some authors, such as Stephen King, seem to appear by default in that author’s Knowledge Panel, whereas the same feature only displays for some other authors when the work “books” is included in the query. Sullivan explained that these results are derived automatically, not because of any favoritism toward one author over another, but because analysis of historical queries may have determined that a search for Stephen King is highly correlated with intent to learn about the titles he’s written.

Though none of this is directly related to local search, it’s a reminder that Google is acclimating searchers to highly customized query results based on an understanding of the intent of the current query and all similar queries in recent history. Clearly a similar logic is at play in the customization of local results, for instance with the inclusion of those custom details we’ve come to call “justifications,” such as “Their website mentions,” “In stock,” photos matching queries, and snippets from reviews, Q&A, service attributes, and posts.

Continuing its track record of being first to market with COVID-related features, Yelp has released two new attributes for business profiles: “Proof of vaccination required” and “Staff fully vaccinated.” These new entries join a long list of COVID attributes that can be configured by a business, including “Limited capacity,” “Staff wears masks,” “Temperature checks,” and several more. Users will be able to filter results by the new vaccination attributes. Yelp also reports that they’ve put safety measures in place to protect businesses from “hateful” or “harmful” content that may be prompted when they display these attributes. The same protective measures are also in place for businesses who choose to display so-called identity attributes such as Black-owned, Asian-owned, Latinx-owned, LGBTQ-owned, and women-owned.

Yelp says over 4,500 reviews have been removed from the platform since January for violating Yelp’s content policies related to COVID health and safety. 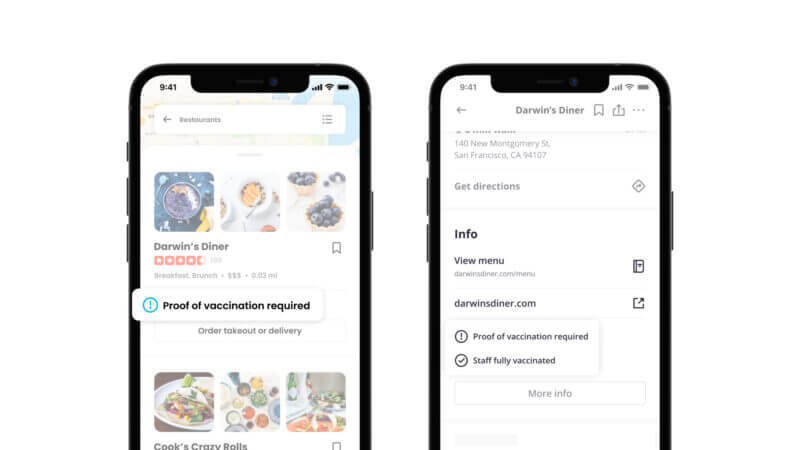