In this week’s update, learn about Google’s May core update; a parallel update in local results; a major reopening for Starbucks; easing of restrictions in some states for restaurants; Yelp’s new virtual services category; Google’s new coronavirus testing SERP; and consumer opinion on the reopening of retail stores.

Google began rolling out the May core update to its search algorithm on Monday, May 4th, and already many SEO tracking companies are claiming it’s the largest update in quite a while. The most recent previous updates to Google’s global search algorithm were in January 2020 and September 2019. Google makes minor changes to search on a more frequent basis, but more significant core updates occur every few months.

According to Mordy Oberstein, CEO of RankRanger, the May update is “an absolute monster,” more significant in its impact, even after a few days, than either of the last two updates. The large degree of volatility noted by RankRanger, which appears to extend uniformly across multiple categories of search, was confirmed by data from SEMRush, Moz, and Search Metrics. 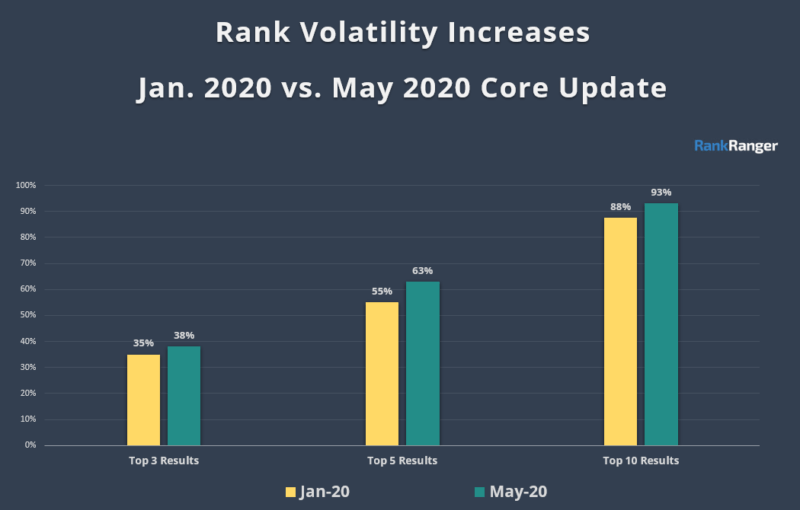 Observers have tallied up a long list of winners and losers. For instance, Search Metrics notes gains in the entertainment category by apple.com, billboard.com, and soundcloud.com, and losses from spotify.com, last.fm, and allmusic.com. As is generally the case with Google core updates, there are unlikely to be specific remedies for ranking decreases; instead, Google encourages webmasters to look more broadly for opportunities to improve usability and relevance.

Starting before the May core update just mentioned, around April 23 local SEOs began noticing dramatic shifts in local rankings, apparently followed by a second wave of ranking changes around the time of the May 4th core update. In fact, the second wave appears much more significant than the first, judging by BrightLocal’s Local RankFlux metric, which detected a peak fluctuation of 5.58 out of 10 on May 8, four days after the core update.

Among the industries tracked by Local RankFlux, the biggest fluctuations on May 8 were found in real estate and property businesses at 6.86/10, medical practices at 6.55/10, and legal practices at 6.48/10.

Unlike core updates, Google sometimes offers specific reasoning behind local algorithm changes that can help local SEOs understand their impact. For example, the major local algorithm change last November was eventually explained by Google as an update that introduced neural matching to local results. No similar explanation is yet forthcoming for the April-May update.

In the week of May 4, Starbucks reopened 85% of its worldwide stores with modified offerings, including changes to the Starbucks mobile app to facilitate, at some locations, both curbside pickup and the handoff of customer orders at the doorway, removing the need for customers to enter the store. The company also announced that, in support of contactless interactions, it will enable purchases via Siri, and will emphasize mobile payment overall, with the expectation that the Starbucks app will become the primary form of payment for most consumers. Starbucks operates about 32,000 stores across the globe and reported a same-store decrease in sales of 60-70% at the end of March.

Restaurants allowed to reopen partially in some states

Restaurants have been or will soon be permitted to reopen in a short list of states, including Alaska, Georgia, Tennessee, Texas, Iowa, Utah, Oklahoma, Missouri, Nebraska, Florida, and Arkansas. Reopening dates range from late April to mid-May, with a longer list of states contemplating a reopening shortly thereafter. Specific restrictions differ significantly from state to state, and some states will allow local jurisdictions to determine whether restaurants will be allowed to reopen. For those that do reopen, capacity in dining rooms is generally limited but to differing degrees -- 25% in Alaska, Texas, and Florida, 50% in Tennessee, Iowa, and Nebraska. Other restrictions limit the number of people in a single party, require that condiments be removed from tables, and mandate the use of hand sanitizer and masks.

Yelp has introduced a new round of updates designed to help businesses showcase virtual services during the COVID-19 pandemic. In order to make it easier for consumers to find businesses offering virtual tours, classes, and consultations, Yelp has added a new virtual services category. Yelp says many businesses in categories like fitness, home services, and real estate are already adding virtual options to their business profiles.

Yelp says that when businesses showcase virtual services in their profiles, the company will make it easier for consumers to find these offerings, for instance by adding a search filter when consumers search for gyms that will identify those offering virtual classes.

Google continues to rapidly evolve the search result page for coronavirus testing searches. Early last week, Google introduced local packs highlighting three top results for nearby coronavirus testing locations. Now many searches are triggering a highly modified result page, including the local pack along with a Knowledge Panel that displays infection counts on a map and tallies local, state, national, and global statistics. Rich results at the top of the page offer guidance from the CDC about evaluating whether one needs to be tested and connecting with a healthcare provider. A tab on the left lets users navigate to additional information with headings like Prevention and Treatments. 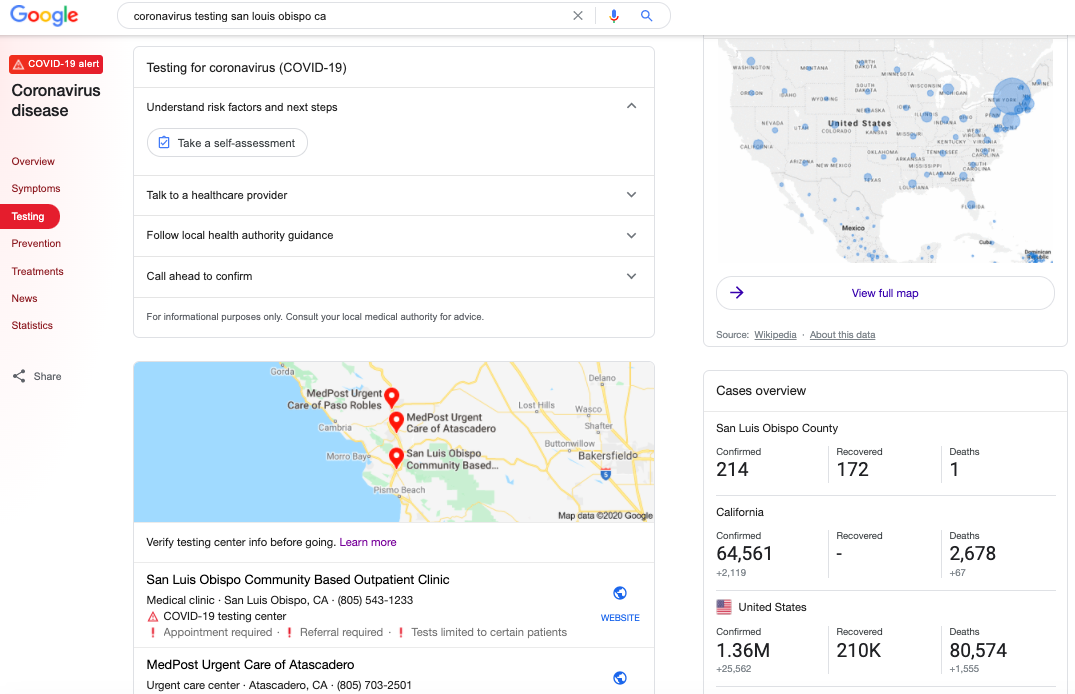 In the new local pack, special symbols and highlighted attributes indicate whether appointments or referrals are required, whether there are limitations at each facility on who can be tested, and whether drive-through testing is available. A “More places” link at the bottom of the local pack takes users to a modified local finder, where special attributes are also highlighted.

As retailers reopen, cleanliness is top of mind for consumers

Retailers across the country are planning for a gradual reopening. Kohl’s plans to open 25% of its department stores as of today, May 11; J.C. Penney has begun a phased reopening; and Belk is reopening several stores with limited hours. In the midst of these plans, a survey conducted by the International Council of Shopping Centers finds that consumers have strong opinions about the measures that will make them comfortable enough to come back and shop.

Asked to rank safety measures in order of importance, consumers picked the following as their top choices:

Consumers were also asked about the businesses they felt the most and the least concerned about revisiting. They expressed greatest concern about public transportation and live events, followed by movie theaters and restaurants. Retail shops were further down the list. As for which businesses consumers miss the most, 72% picked restaurants, compared to 53% for retail stores.