In this week’s post, learn about new Maps features from Apple; the closing of Avast subsidiary Jumpshot due to privacy concerns; updates on Featured Snippets; Google’s new chatbot technology; a new Google patent for improving search and navigation for drivers; and a prank that may have caused fake traffic jams in Google Maps.

Apple Maps has announced that several newer features, some of which have been showing up in the field for several months now, have officially rolled out to the entire U.S. market. Most notably, the accuracy and detail of both mapping and navigation have taken a leap forward, presumably as a result of Apple’s effort to replicate Google’s Street View initiative with its own fleet of camera-rigged cars.

The announcement also pushes hard on the theme of privacy, suggesting Apple believes this angle will help them compete with Google. Features like integrated flight information work by means of “on-device Siri intelligence,” rather than sending your info to Apple’s servers. Apple uses “fuzzing” to obscure your location after you perform a search, and does not store user location histories.

In addition to being available via Apple’s own devices and applications, Apple Maps powers mapping and navigation on Facebook’s mobile app as well as Instagram, and provides mapping, navigation, and local listings on DuckDuckGo. The new features are said to be going live in Europe in the next few months.

In a swift series of events last week, an exposé published jointly by PC Mag and Vice’s Motherboard has led to the shuttering of Jumpshot, the analytics subsidiary of Avast. Many will be familiar with Avast’s popular, free antivirus tool. In the SEO community, Jumpshot, which previously provided data to SEMRush, Ahrefs, Moz, and other companies, is also well known. In fact, it was Jumpshot data that allowed Rand Fishkin to make the notorious claim a few months back that more than 50% of Google searches now offer “zero-click” results.

The scandal has to do with the company’s practice of gathering data on the search behavior of users who install the Avast antivirus tool. PC Mag and Vice claimed that Avast was capturing every search and click from millions of users without sufficiently informing them, and that the company’s claims of anonymizing user data were unconvincing. Rand Fishkin has come to Avast’s defense; in a post on the SparkToro blog, Fishkin writes that Avast has actually been exemplary in providing clear opt-ins to users and going to great lengths to protect their privacy. He claims the company was providing a crucial service by enabling better insight into the practices of tech giants like Google, Amazon, and Facebook.

As I mentioned last week, Google has rolled out a change whereby Featured Snippets are no longer accompanied by a link in position one of organic search results. Some users, after the change was announced, claimed the links were moving to page two, but analytics company RankRanger has shared analysis showing the links are not appearing at all in the top 200 results. Google considers this deduplication; company spokesperson Danny Sullivan noted in response to RankRanger’s findings that Featured Snippets are themselves high-ranking organic results.

As noted by George Nguyen on Search Engine Land, Google has stopped deduplicating Featured Snippets in cases where the snippet appears in the right rail -- the same position as a Knowledge Panel. But Google plans to move these right-rail snippets into the main search results area, so the current duplication of links is likely temporary.

Google has published a paper discussing its new AI framework, Meena, which makes use of large amounts of data and a massive neural network, and can supposedly converse on any topic. According to a writeup on VentureBeat from AI expert Alan Nichol, a Meena-powered chatbot can even invent jokes based on user inputs, and can carry on a conversation over multiple “turns” while keeping track of the topic being discussed, a major advancement for chatbots. Nichol suspects Meena was trained on the entire corpus of conversations posted on Reddit.

In another of his well-known Google patent explanations, Bill Slawski has written about a new Google patent issued in January that is designed to improve the navigation experience for drivers. As Slawski explains, the patent describes navigation features tied to a user’s prior searches and to contextual information such as current traffic conditions. The patent describes, for instance, a search for restaurants conducted by a driver on the way to work in the morning; results are prioritized based on the user’s history, indicating a preference for Dunkin’ Donuts over Starbucks, and on other factors such as traffic and the availability of parking at nearby Dunkin’ Donuts locations. The patent aims to make search and navigation more convenient by prioritizing relevant results based on the context of search, and providing better ways of refining search results and adding intermediate destinations.

A German artist named Simon Weckert has made news with a “hack” whereby he walked the streets of Berlin pulling a red wagon with 99 smartphones in it. Each of the smartphones had Google Maps navigation running, and Weckert claims this caused “green” streets in Maps to turn “red,” signalling a traffic jam and rerouting drivers to avoid the supposed congestion. The prank exploits Google’s methods for determining traffic conditions by collecting information from nearby users running Google Maps. 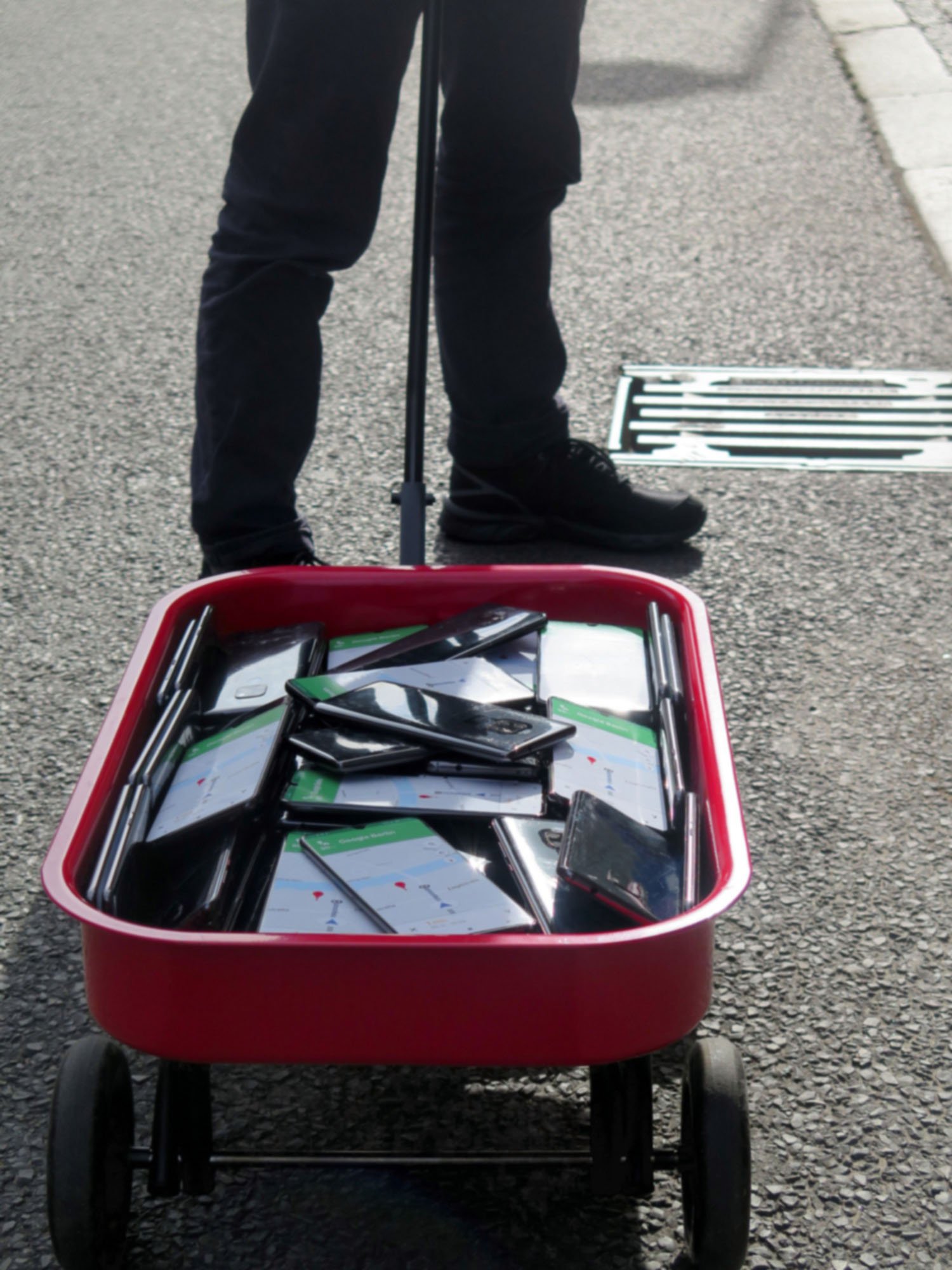