In this week’s update, learn about the ranking impact of low-quality pages and identity attributes; the persistent myth of domain authority; the controversy around zero-click statistics; how to recover lost Google reviews; GMB Food Ordering for grocery; and the great citation debate.

Two new studies show that excessive content can hurt your SEO strategy, while certain attributes can help you rank well in local searches. In the first study, Joy Hawkins reports on an attorney client who had previously worked with an SEO firm that built out numerous service area pages in an attempt to rank the business for “service + location” searches. Because these pages had a lot of duplicative content, little information of value to the searcher, and very few inbound links, they were hurting the client’s ranking more than they helped. Merely getting rid of low-value service pages caused the client’s rankings to improve dramatically, underlining the fact that subpages outlining your additional services, product lines, or service areas will only help you if they provide actual value to the user.

In another study, Colan Nielsen shows that what he calls “identity” attributes can, in fact, help you rank for certain searches. Nielsen notes a recent article by Hawkins which asserts that the only GMB features directly related to ranking are business name, categories, website, and reviews; but, he says, we can now add attributes related to business ownership to that list, such as “Identifies as Black-owned,” “Identifies as veteran-led,” and “Identifies as women-led.” Specifically, Nielsen’s research showed that use of the attribute “Identifies as women-led” caused businesses to appear prominently in searches related to that attribute, such as “women paralegal.” In local packs triggered by these searches, listings where the attribute was enabled appeared with a special icon and the attribute text in the local pack result. 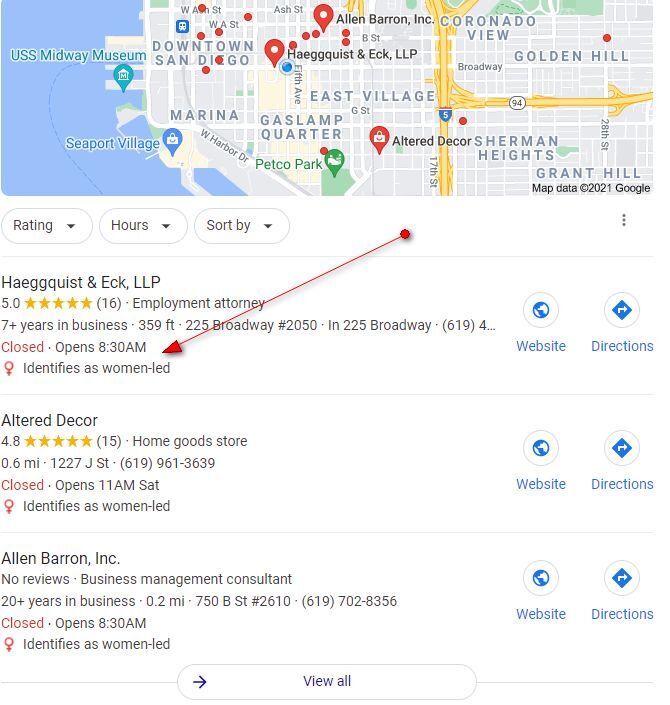 The persistent myth of domain authority

A surprisingly lengthy debate cropped up on Twitter the other day about the value, or lack thereof, of the domain authority (DA) metric, a proprietary measurement of website authority developed several years ago by Moz. Domain authority ranks a website’s strength, largely through backlink analysis, on a scale of 0 to 100; but as Barry Schwartz notes emphatically in his writeup, domain authority has nothing to do with Google rankings and is not looked at or referenced by Google in any way. Still, the blogger who started the debate argued, many publishers and brands use domain authority heavily as a measurement of the value of blogs and other publications. This is a circular problem for bloggers, since brands use domain authority to evaluate whether it’s worth sharing the very links that would increase a blog’s domain authority. But the larger point is that the Moz metric is both overused and misunderstood in a way that even Moz’s Dr. Pete Meyers, weighing in on Twitter, agreed is unfortunate. It should not be used as a proxy for actual website ranking or popularity, but rather as merely one among many tools used to measure the potential to rank well. Meyers suggested “traffic or mentions or a handful of quality partnerships” as all being more relevant than DA for conveying a site’s actual reach.

The controversy around zero-click statistics

We’ve been quoting Rank Fishkin’s zero-click reports here at Brandify in a few different places -- including in my Street Fight article last week on zero-click consumer engagement -- so I think it’s important to acknowledge that Fishkin’s findings have been controversial. A new post on Search Engine Journal from Amplitude Digital’s Jeff Ferguson takes serious issue with Fishkin’s findings, going so far as to title the piece, “We Need to Stop Quoting Misleading Zero-Click Search Studies.” This follows from earlier critiques of Fishkin’s March 2021 report from Google’s Danny Sullivan and from Roger Monnti, also writing in Search Engine Journal.

Ferguson’s argument goes into a great deal of detail and will be impossible to address thoroughly here. He cites Monnti’s earlier objections that Fishkin’s data is not a representative sample of Google searches, but rather a limited, non-random sample of the searches Jumpshot (2019) and SimilarWeb (2021) were able to provide. Jumpshot, for example, provided searches on Android and PC by users of Avast Antivirus. Ferguson also cites several studies whose conclusions would appear to contradict specific details of Fishkin’s report, and takes issue with Fishkin’s definition of “zero-click.” Both objections are neatly summed up in his citation of a 2013 study which found that 70% of mobile searchers click to call a business from search results (presumably he means “mobile searchers who are looking for business contact info”).

I encourage you to read the piece, as well as Sullivan’s and Monnti’s responses to Fishkin. My own view is that none of the criticisms undermine the fundamental insight that a large and growing number of Google queries are fulfilled by Google’s own results. Whether that number is 51% or 64% or something else, the conclusion holds, and the trend is significant, though of course we should subject any specific claims to close scrutiny.

How to recover lost Google reviews

The intrepid Phil Rozek tends to write pieces that tackle some of the toughest local SEO problems. His latest deals with what you can do if you accidentally delete your GMB listing and thereby lose all of your reviews. This may seem hard to do, but Rozek tells the sad tale of an associate who found that, after deleting his G Suite account to move to a different email provider, discovered that his GMB listing and its 60 reviews were suddenly gone too. Rozek writes, though, that “Google reviews are never completely safe -- and never completely gone,” explaining that the correct resolution path in this case is to create a new GMB listing with exactly the same contact information as the one that was lost, then contact GMB support and explain the problem in detail, following their instructions until the old reviews are restored. Rozek was able to help get all 60 reviews back in this case. He cautions that this resolution path isn’t the same one you should follow if you lose reviews but still have access to your listing, but the larger point is that lost reviews can often be recovered with the help of GMB support.

Following from the report last week about the new Food Ordering tab for restaurants in the GMB dashboard, I wanted to mention that we are also seeing this tab for grocery stores. However, the details are slightly different, as you can see below. Whereas both restaurants and grocery stores are prompted to use Google’s TheOrdering.app (which is optional and not required for online ordering to work), at the top of the page the content for grocery is slightly different. The telling detail is this: “Activate your button by partnering with approved third-party providers or signing up for TheOrdering.app and creating an online ordering page.” Whereas restaurants can list their own ordering platforms and mark them as preferred for takeout and delivery, grocery stores must work with a third party like Instacart or Postmates, at least for the time being. 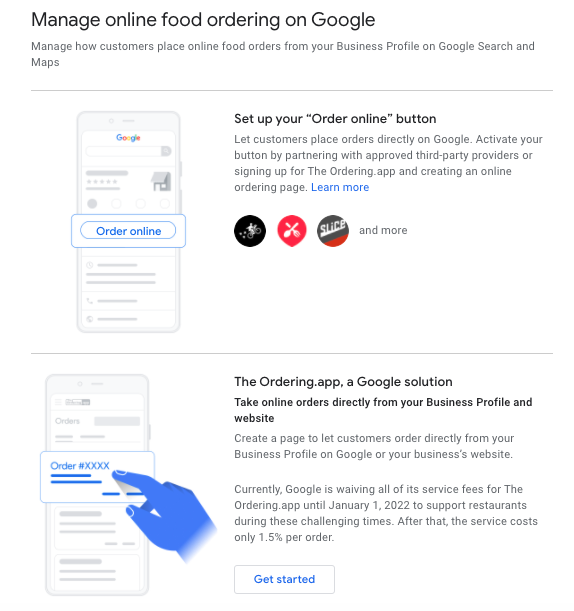 Darren Shaw’s latest Whitespark Weekly video makes a valiant case for the lowly citation, the neglected stepchild of local search. In Shaw’s own Local Search Ranking Factors survey for 2020, a great number of local SEOs reported that citations (consistent listings of your business on multiple directories) were unimportant or much less important than they used to be. Shaw counters by saying that local citations are still a foundational ranking factor but are now taken for granted. He also notes that whereas citation building alone used to be able to get a business ranked highly in local results, now it’s just one of many factors including reviews, website optimization, and GMB completeness. In addition, it takes a long time -- perhaps 1.5 years -- to see the full value of citation building come to fruition, due in large part to the time it takes Google to get around to indexing lower-value directories with millions of pages. Shaw has a few other rationales for the value of citations, and some recommendations for how to include citation building in your 2021 local SEO strategy.