Managing Linked Listings Has Been Tricky In The Past

Google hasn’t been especially transparent in the past about managing the relationships between business listings. Examples include departments in an organization, professionals in a practice, and independent establishments inside a larger business, like Starbucks inside Target or McDonald’s inside Walmart. It’s clear that Google has its own internal mechanism for keeping track of these relationships, but they’ve been unwilling to expose that data to third parties or business owners, perhaps because it’s inherently complex and rife with edge cases.

Now, Google Users Can Indicate One Type of Linkage

But in a limited way, Google has now opted to let its user community share information about linked listings by adding “Located within” as an option to the “Suggest an edit” form. This new feature is visible for example when you click “Suggest an edit” from within the Knowledge Panel for any GMB listing, as illustrated in the screenshot below.

Start typing the name of the containing business and Google will offer autocomplete suggestions of businesses nearby. In this case, the only matching listing for the letter “s” was a nearby attraction called the Swinging Bridge.

Google will happily allow me to suggest that the restaurant Alphy’s Broiler is situated (somehow) within the Swinging Bridge, though I would be surprised if this edit were ever approved. In fact, the Local Search Forum thread on this topic suggests that the approval process for the new “Located within” feature has been slow at best -- though it may help if you simultaneously move the map pin for the listing so that it is clearly situated inside the containing business.

If Approved, "Located In" Shows Up in Knowledge Panel

If such an edit were in fact approved by the Google editorial team, here’s how the information would appear in the Knowledge Panel. 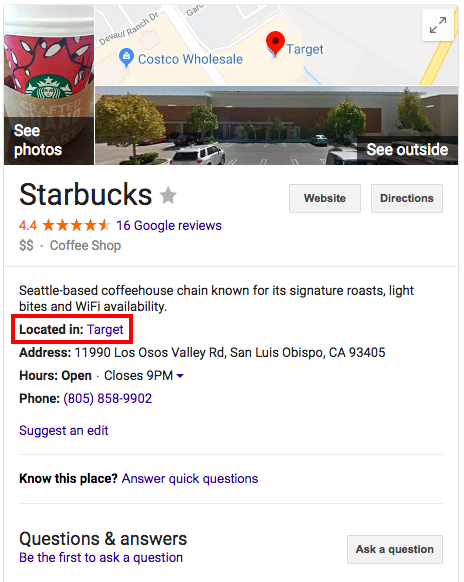 Brandify has long been able to work directly with Google support to get business listings properly connected together, but we’re excited to see this early sign that Google is exposing tools to make the process easier. We look forward to seeing similar features in the GMB dashboard and ultimately the API.

How Digital Marketing Experts Can Use Google’s New API Integration

4 Ways to Harness the Power of Facebook Local Listings