Stream Wars: Can the Meerkat-Periscope Battle Lift Your Marketing Strategy?

The stream wars are heating up between Meerkat and Periscope, and only one live stream mobile app will end up as the victor. But regardless of who ends up on top, how will marketers integrate live streaming capabilities into their marketing mix?

While we can’t give these two new apps all the credit for live streaming, we do have to admit that streaming on social has never been this simple or mainstream. With a click of a button you can now share video from your mobile device to an unlimited amount of people everywhere, at any time.  Users and brands alike can host an intimate, real-time experience, breaking the mold for  desktop-based live streaming like Google + Hangouts On Air.  Sorry, Google: looks like it’s’ all about the apps.

Meerkat live video streaming app made its debut early March and was a huge hit at this year’s South By Southwest festival hitting a peak of 5,300 mentions per hour during the event. With Meerkat you can instantly stream live video to your Twitter followers, discover trending users and events around the word, and create a live conversation that takes place within the app and on Twitter.

Curious to see how this type of technology can be used for brands we tested out the Meerkat App ourselves by promoting our CEO, Manish Patel’s panel event at BIAKelsey  National event last week. We wanted to broadcast his session to followers and colleagues that were unable to attend the event themselves. To gain attention, we promoted the stream on Twitter beforehand since the Meerkat “rules” dictate that streams can only be viewed in real-time.

The server that hosts the live video streaming can be set up and scheduled so that people watching from other states can write in questions and receive live answers. This allowed viewers from the app to interact with a click of a button.

While on Meerkat, we were also able to see who was viewing the stream. This allowed us to follow up with individuals once the stream had ended. Despite the frequent “Low Connectivity”  image appearing throughout the broadcast, we do see where brands could gain and provide value from this type of application.

What’s the deal with Periscope?

Periscope, a Meerkat-like live streaming app, was acquired by Twitter in January for a reported $100 million. The same day Twitter officially launched Periscope there were nearly as many tweets containing the hashtag #Periscope as those containing the hashtag #Meerkat. The speed at which Twitter released the product indicates the company may be attempting to neutralize Meerkat’s growth, and it appears to be a successful strategy.

Now, the question is: if brands begin to adopt this new trend, which app will they choose?

Periscope’s functionality is very similar to Meerkat, except for the fact that ironically, isn’t as tied to Twitter as Meerkat is. On Meerkat, any comment within the app is simultaneously formulated into live tweets, while Periscope comments remain within the app itself. 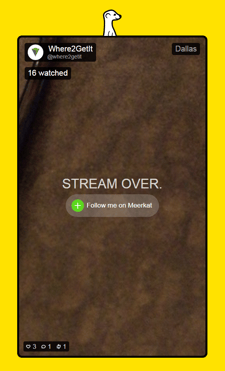 There are also more analytic features that can be found on Periscope than from Meerkat including:

These type of analytics on Periscope could provide brand managers insight into which types of streams resonate with consumers the most. We could even see this being an opportunity to plug location-based streaming.

Now that we understand the features within these applications, how could brands include these apps into their marketing mix?

As predicted, 2015 will be the year of video. With the growing amount of Wi-Fi networks and faster 4G mobile networks than ever before, live streaming is well on its way set to become as regular a part of our lives and brands that become early adopters will reap the biggest awards.

We suggest implementing this type of livestreaming into your marketing strategy the following ways:

So, which app should you choose: Periscope or Meerkat?

While we all had high hopes for the success of Meerkat we believe Periscope will be the ultimate winner of the stream war.  The additional features found on Periscope combined with the fact that Meerkat’s success relies on its integration with Twitter will be its ultimate downfall. Once Twitter purchased Periscope, the company cut off Meerkat from its social graph, which makes it even more difficult for Meerkat users to find others to follow.

At the end of the day, marketers should always remind themselves of one definite fact: your brand must engage with consumers on social media. These new apps, networks and buyouts give brands, both local and national, the opportunity to experiment and find ways to connect deeper and more effectively with customers on these networks.

To get started on forging the connection, read our whitepaper: "The Enterprise Mobile-Social Guide"

Andrea is the Social Media and Content Writer Specialist at Brandify.

3 Tips to Developing an Effective Content Strategy for Social Media

6 Reasons Why You Should “Outsource” Your Local Marketing Strategy