In this week's Monday Memo, read about Walmart's wins on Prime Day; Trustpilot's new reputation study; DuckDuckGo's local updates; signs of health in offline commerce; the conversion rate of Google listings; the real percentage of local searches; and the resolution of the GMB short names bug.

Walmart makes the most of Prime Day

Amazon wasn’t the only one hoping to capitalize on the buzz surrounding Prime Day, with Walmart offering discounts on items like big screen TVs, iPads, and Instant Pots during the same period. Target, Best Buy, and eBay also ran promotions during or just before Prime Day, suggesting that retailers now view the invented holiday as a sort of second Black Friday and a chance to win some free marketing by riding the wave of consumer interest generated by Amazon. In fact, searches for Walmart, Target, Best Buy, and eBay were collectively up 255% on Prime Day itself. Consulting firm Captify also found searches for how to cancel Amazon Prime spiked on Prime Day, suggesting Amazon may be reaching a saturation point with Prime subscribers.

Trustpilot: 90% of consumers avoid brands with a negative reputation

In a new study released by Trustpilot, the company surveyed 1,700 shoppers from around the world and found that 90% were likely to avoid brands with a bad reputation. Some 93% of respondents said they read reviews before doing business with a new company. Interestingly, the mere presence of even a single review contributes significantly to consumer trust. Only 9.3% of those surveyed said they would trust a company that had zero reviews, that number jumping all the way to 60% for a company with just one review.

The consumers surveyed placed a high value on review response, with nearly 80% saying they trust a brand more when it responds to negative comments or reviews.

According to the study, multiple factors contribute to building consumer trust. Aside from positive reviews and a good reputation, these factors include quick service, high-quality products, transparency about how products are sourced, prioritizing the well-being of employees, discounts for loyal customers, and commitment to social issues. 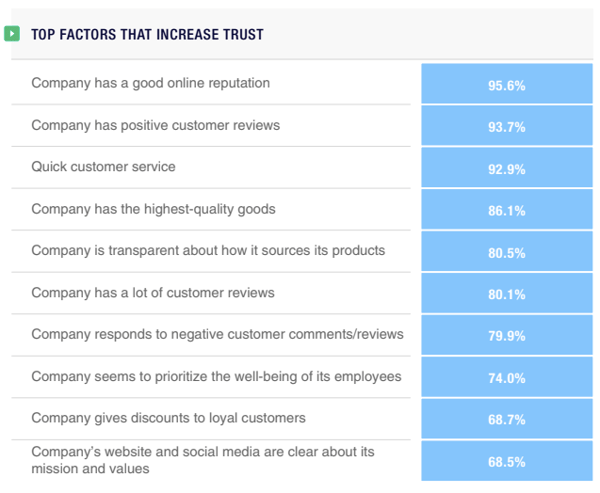 DuckDuckGo, the privacy-focused search engine that just recently hit 40 million daily searches, has been using Apple’s MapKit JS framework for a few months now to provide local search results as well as mapping and navigation services. Now the company is announcing some enhancements to its local search toolset, including a “map re-querying” feature that makes it easier to refine searches in a specific geographic area; an autocomplete feature that suggests matching nearby results; a dedicated maps tab on every search page; and an optional “dark mode” that matches the dark theme users can enable in DuckDuckGo search.

Though the updates are fairly modest in scope, they do indicate that local search is a significant part of DuckDuckGo’s product roadmap at a time when the company -- recently profiled in the New York Times -- is getting a lot of attention. What’s more, DuckDuckGo is currently the only significant example of Apple Maps content being displayed outside of the iPhone’s native mobile app.

The rate of retail store closures this year is on track to break a record, with 7,062 store locations having closed already this year -- greater already than the total number of closures in 2018. Industry studies predict the number may hit 12,000 by the end of the year.

Though some have dubbed the trend a “retail apocalypse,” a recent Forbes report points out that retail sales actually grew 4.6% last year and are projected to achieve the same growth rate in 2019. Online sales are still only 15% of U.S. retail commerce, and although online is growing faster than offline retail, there are signs that this growth might eventually reach a plateau. According to Forbes, consumer habits appear to be in the midst of some course-correction, as Millennials seek out in-person experiences, malls repurpose themselves with fitness centers and limited-service healthcare facilities, and retail stores become more aggressive with initiatives like “buy online, pickup in store.”

BrightLocal has released a new study of Google My Business insights data, examining 45,000 local businesses across 36 verticals and 4 countries. The study finds that businesses on average are surfacing in search just over 1,000 times every month, or about 33 times per day.

Unsurprisingly, a vast majority of those searches, some 84%, are keyword-driven rather than branded, demonstrating that most local search activity is about discovery of new or nearby businesses. About 5% of all searches, according to the study, result in a click action such as a request for directions, click to call, or a click to the business website. Though these click actions may not be conversions in themselves, for the most part they indicate a strong likelihood of conversion.

What’s the real percentage of searches with local intent?

Greg Sterling in a recent column brings up the longstanding question of just what proportion of search traffic carries local intent. As Sterling notes, Google staff have informally cited various numbers over the years, from 20% in 2011 to 46% in 2018, without ever issuing an official statement on the matter. At last week’s MozCon in Seattle, Moz’s Rob Bucci presented a study of 1.2 million search result pages and found that local content was present 73% of the time, suggesting that the volume of local queries may in fact be much higher than previous estimates would indicate.

A bug that was causing listings to disappear from search has been fixed, according to a statement from Google on July 14. This bug, reported by many in the local SEO community, occurred when the new short name feature was enabled in a listing.

There has been no word yet on a resolution for another recent issue whereby reviews are disappearing from some listings. The reviews issue was thought by some to be related to the short name issue, but Google has denied there is any connection.