In this week’s update, learn about the response of tech companies to a House antitrust report; a new call history feature, virtual appointment options, and a change to video uploads in GMB; Yelp’s new alert about businesses accused of racism; a new local SEO checklist; driving directions on DuckDuckGo; and YouTube’s launch of ecommerce features.

On October 6, the Judiciary Committee of the House of Representatives issued a mammoth report accusing major U.S. tech companies of monopolistic activity. The report recommends, among other things, prohibiting big companies from operating adjacent lines of business, as well as a ban on self-preferencing that could have a major impact on the common practices of search engines like Google.

Amazon, Apple, Facebook, and Google have all issued rebuttals to the report’s allegations. Amazon’s response contends that, far from dominating online retail, the company is instead creating in Amazon Marketplace an important channel within which small businesses can thrive. Similarly, Apple’s statement pointed out that 85% of App Store revenue goes to third party developers, and Facebook placed its success in the context of a highly competitive market, suggesting that, although it may be the dominant social network now, the company is under constant threat of losing that stature.

As for Google, the company’s statement points to the economic value created by its free products, and suggests that breaking up internet companies would cause “real harm to consumers.” Google, like Facebook, says it operates in a highly competitive industry, and suggests that “inaccurate allegations from commercial rivals” form the basis of the House’s complaints.

The House report asks Congress to consider changes in antitrust laws that could result in the breakup of the targeted companies. Republicans have opposed the most stringent recommendations in the report.

Some users in the U.S. have noticed a new call history feature that is in beta within Google My Business. A prompt to “Preview call history” appears for users who have the feature enabled. If the user clicks the button to “Try it out,” he or she is shown a brief explanatory screen as displayed in the screenshot. 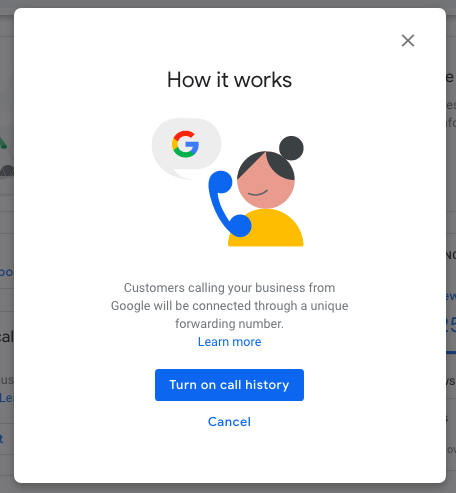 As explained in the popup, turning on call history triggers a forwarding number that Google will use in order to track call information. Any inbound calls you receive after the feature is enabled will begin with an automated announcement, “Call from Google.” A Calls tab will appear in your GMB dashboard, but call history data can only be viewed in the GMB mobile app. In the app, you’ll see the past 45 days of calls including date, customer phone number, and duration of call. The point of the feature is to allow business owners to review recent calls and return calls that may have been missed or disconnected.

One more step in the rollout of virtual offerings in GMB

I’ve been reporting on Google’s gradual rollout of virtual appointments within GMB. Now Colan Nielsen has noted a new prompt in GMB that invites businesses to integrate virtual booking by way of third party providers like Wellness Living, Opensalon, goPanche, Bookeo, and Booksy. These third parties specialize in different verticals. Google’s prompt reads, “Manage your bookings for online classes and appointments through a provider with video integration.” All of the third party providers listed in Nielsen’s screenshot appear to be working with Zoom as a virtual booking solution. Presumably, consumers will soon be able to book virtual Zoom appointments with select businesses via Reserve with Google.

Google has reduced the maximum size of videos uploaded to Google My Business from 100MB to 75MB. Video uploads have been supported in GMB since January 2018. It’s unclear exactly when the reduction in maximum size was put in place, but it appears to have been sometime in the last few weeks. It’s also unclear why Google has implemented the reduction; Barry Schwartz’s writeup suggests it may have a connection with spam fighting, but even here the rationale is hard to discern.

Yelp has taken what the company calls “a firm stance against racism” with a new Business Accused of Racist Behavior Alert, which it will display in cases where Yelp staff has determined that a significant racist incident or incidents involving management or staff has occurred at a business location. Yelp’s notice reads, “We’ll only escalate to a Business Accused of Racist Behavior Alert when there’s resounding evidence of egregious, racist actions from a business owner or employee, such as using overtly racist slurs or symbols; and this alert will always link to a news article from a credible media outlet so users can learn more.”

Yelp says that the company wants consumers to know that they will be welcome and safe at the businesses they visit. “The new Business Accused of Racist Behavior Alert,” Yelp says, “is an extension of our Public Attention Alert that we introduced in response to a rise in social activism surrounding the Black Lives Matter movement.” Yelp reports that searches for Black-owned businesses on the platform surged by 617% this summer.

Maddy Osman has published an extensive local SEO checklist on Search Engine Journal that is worth checking out. Osman notes that about 46% of all searches have local intent, so it’s important for any business with a local presence to optimize for local searches. Website optimization, content strategy, recommendations for mutli-location businesses and businesses with multiple brand names, citations, social media, reviews, GMB and other important channels, and much more are covered in Osman’s list of recommendations. Osman also points out the importance of “the real world” in local SEO, suggesting that great employee training, excellent customer service, response to feedback, and involvement in local communities are important offline activities that contribute to online success.

Popular privacy-oriented search company DuckDuckGo has added turn-by-turn driving and walking directions to its mobile app, powered by the Apple Maps SDK. Though the feature always begins by offering directions from your current location, DuckDuckGo emphasizes that it does not store or sell user location information, in stark contrast to Google and other companies whose location sharing features power foot traffic attribution and related services. Per the company’s announcement, “Route planning was a missing piece in DuckDuckGo Search. Integrating it means our maps now have the functionality you expect with the privacy you deserve, with no trade-offs.”

An average of 71 million searches were performed on DuckDuckGo each day in October 2020, up from 69 million in September and 65 million in August.

Google is planning to add a full-featured ecommerce component to YouTube, according to a report in 9to5Google. Product-related videos, from new product reviews to unboxing videos, are already an incredibly popular content segment on the platform. Now, content creators will be able to tag products featured in videos, connecting featured products to shopping tools and analytics. YouTube is reportedly also testing a Shopify integration that would allow some items to be sold within the YouTube platform. The report speculates that YouTube may charge a commission on each sale.