In this week’s update, learn about Snapchat’s upgraded map; a new business model from Starbucks; the increased cost of dining out; an outbreak of Google listing spam; new GMB notifications for removed reviews; and the display of services and owner info in mobile search.

At the recent Snap Partner Summit, Snapchat unveiled several new features and an updated layout, including a new “action bar” at the bottom of the screen that makes it easier to navigate to different parts of the app. Notable among the upgrades is a revamped Snap Map that, according to TechCrunch, represents Snapchat’s bid to “compete head-to-head with Google Maps.”

Already, Snap Map allowed users to view friends, local businesses, and public stories on a map. Snapchat claims the current iteration of Snap Map has 200 million monthly users. Now, Snapchat will add millions of listings for businesses around the world. Listing and reviews are already appearing with content from Foursquare and TripAdvisor, and users can order food from restaurants via Uber Eats, DoorDash, and Postmates. Bars, restaurants, and other businesses will be able to buy ads in order to highlight themselves on the Snap Map. 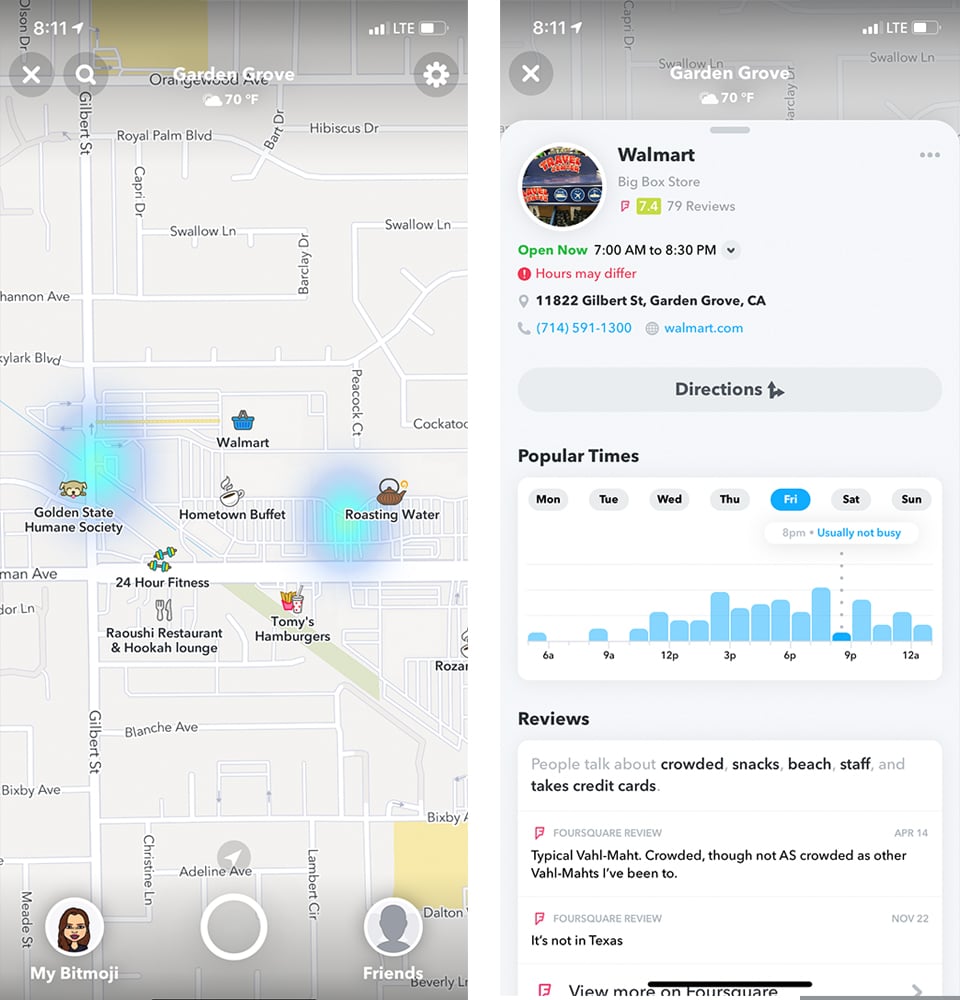 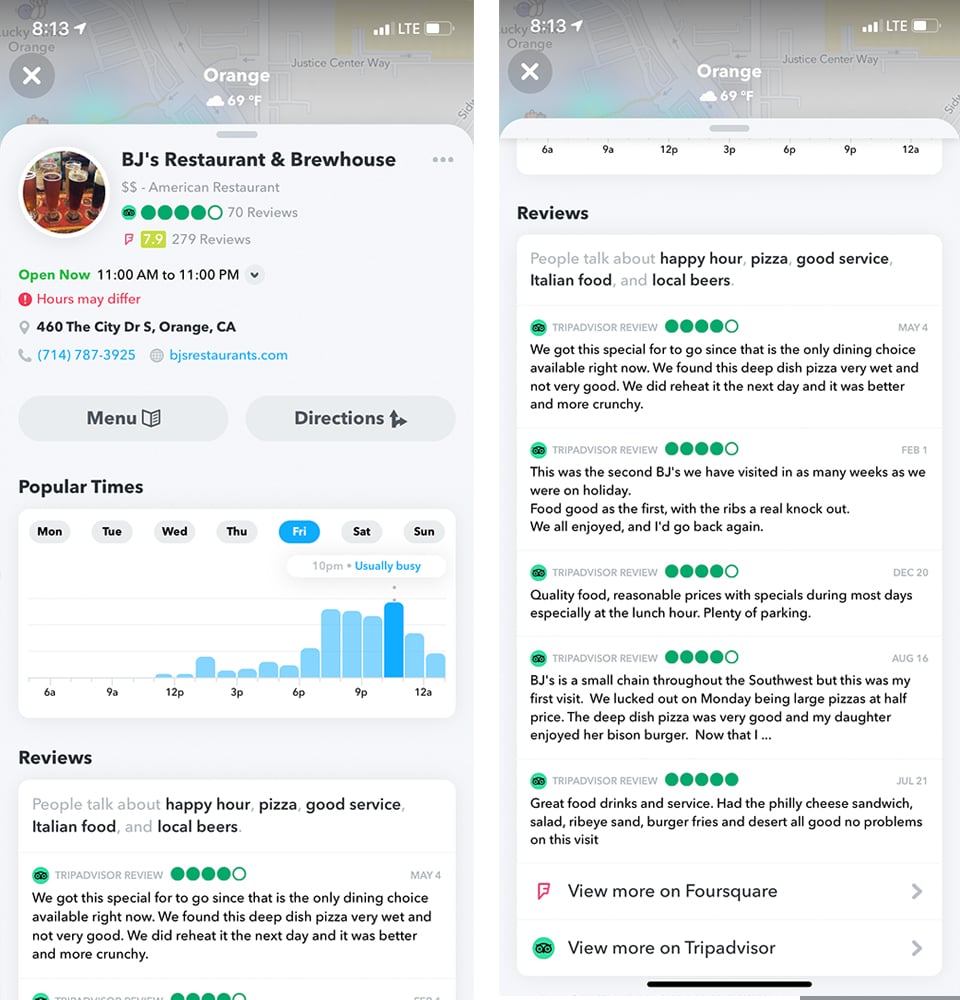 New Snap Map features, including reviews from Foursquare and TripAdvisor

Starbucks will close hundreds of stores and pivot to takeout; Dunkin’ to add 25,000 jobs

Starbucks has announced that it expects to lose $3.2 billion this year due to the coronavirus pandemic. The greatest hit so far has been in the earlier days of the shutdown; 95% of U.S. stores are now open and, although sales were down 43% for May, the chain is seeing improvements each week. Still, recovery has been slower than expected, and in response the company has downgraded previous plans to open new stores. Some 400 stores will close this year in the Americas and about 700 will open, with a net gain of 300 stores.

In addition, the company plans accelerate plans to develop a new store format focused on pickup services, and away from Starbucks’ established concept of, as Bloomberg puts it, “being a ‘third place’ away from work and home for customers to relax.” Though plans for pickup-oriented locations were already in place, Starbucks had previously intended to roll them out over the next 3 to 5 years. The revised plan is to bring these stores live much sooner.

In related news, Dunkin’ has weathered the pandemic with slightly less damage. About 90% of stores are open, and sales are down only 23% as of May 23. Apparently anticipating a successful recovery, the company has announced it will hire 25,000 new employees throughout the country this summer. Dunkin’ has also affirmed its commitment to diversity and inclusion in hiring practices in light of the recent protests.

Dining out will likely be more expensive due to COVID-19

Enhanced safety measures, as well as a rise in food costs, have caused the expense of running a restaurant to rise by 38%, according to a story from Business Insider. At the same time, lower rates of occupancy will mean that restaurants can’t expect the same levels of income as before the pandemic. The combination of these factors creates the perfect conditions for a rise in restaurant prices.

Studies of February data compared to May indicate that restaurant costs have skyrocketed. The cause was rising food prices, driven in large part by the shutdown of food processing facilities to stop the spread of COVID-19. Additionally, many food products in the supply chain were shifted during the pandemic from restaurants to grocery stores.

Analysts expect rising prices to impact consumers very soon, though it’s unclear whether consumers will be willing to pay more to dine out. Fast food chains, in particular, are attempting to delay the impact by offering value-based deals that work around reduced availability -- Wendy’s, for example, has offered meal deals focused on chicken due to increased beef prices.

Google Product Expert Ben Fisher broke the news on Twitter last week that thousands of spam listings for garage door repair had appeared in Google My Business. The listings appeared over the course of a few days across the country. Google search liaison Danny Sullivan replied to Fisher’s tweet, reporting that the Google team was looking into the reports.

Similarly, Lily Ray posted on Twitter an increase in listing spam for drug rehab facilities, and Jason Brown reported finding 478 fake listings in about 3 hours. The problem of fake listings in GMB, as discussed over the past several years in the local SEO community and covered  more broadly in places like the Wall Street Journal, is one that many local SEOs believe Google has done too little to combat.

As reported, once again, by Ben Fisher on Twitter, Google has begun notifying business owners and listing managers when a listing is removed from publication. As illustrated by the screenshot below, reviews can be removed by Google’s moderation team because they violate one or more of Google’s content restrictions. 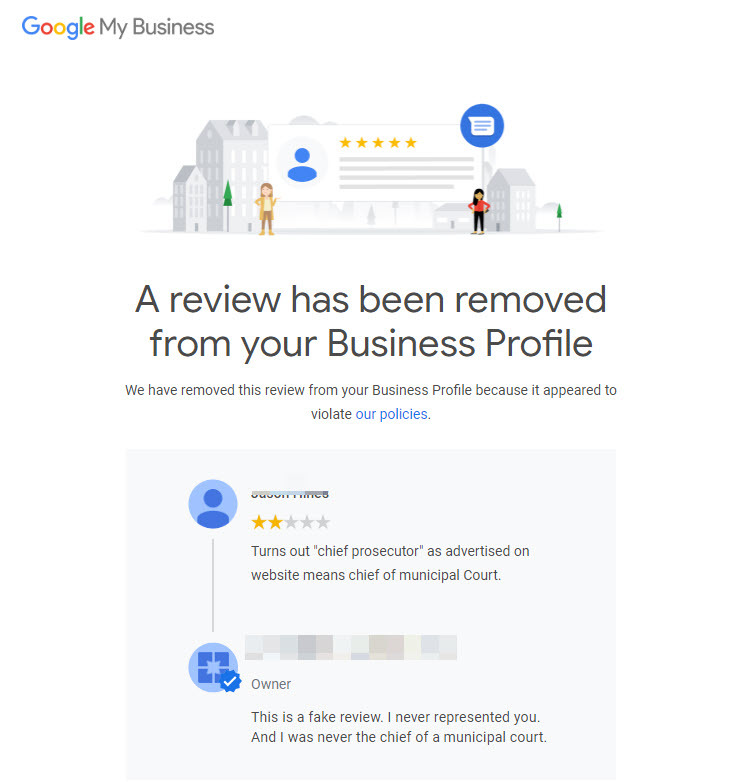 At this point, notifications appear to be available in the GMB dashboard only and not in the API. Google allows users to flag reviews for a number of possible violations, after which the review is examined by the company’s review moderation team. Users can flag reviews due to irrelevance, conflict of interest, offensive or sexually explicit content, privacy concerns, or legal issues.

Local SEO Tom Waddington has noted the appearance in mobile search of some new GMB features, including more prominent positioning for lists of services as well as a field identifying the owner of a business and linking to a post on Facebook. 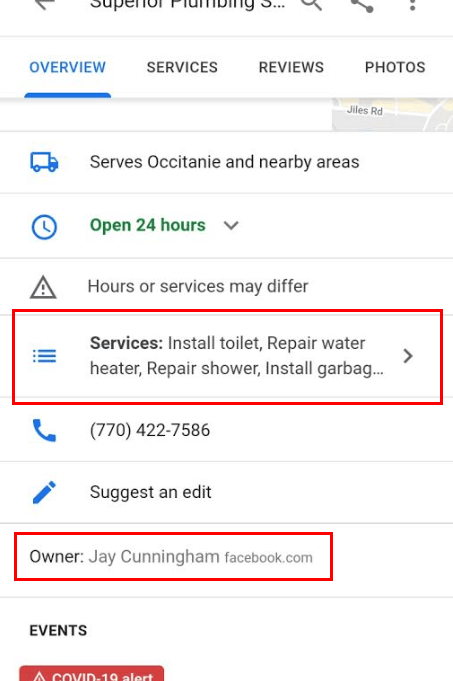 Service lists are a recently launched feature in Google My Business, covered in a previous blog post, that allow businesses to identify available services related to their chosen business categories. The move to showcase these services more prominently in mobile search might be seen as an extension of recently “promoted” attributes such as takeout and delivery for restaurants.