In this week’s Monday Memo, read all about Nextdoor’s Local Deals product; Google’s new “Search by photos” feature for local searches; TomTom’s self-driving cars; the perils of keeping up with Google; and the best-performing service area businesses.

Nextdoor, the neighborhood-oriented social network that currently operates in 248,000 neighborhoods internationally, may be in the midst of quietly redefining local search in a major way. Already the company has made news for a series of funding announcements resulting in a $2.1 billion valuation. Now the company is launching Local Deals, a feature that will let businesses reach out to nearby consumers with special offers and discounts.

Local businesses are already a significant presence on Nextdoor, with a Businesses section on the site and mobile app that features local establishments recommended by other users, some of them displaying the designation Neighborhood Favorite. According to Nextdoor’s head of product Tanya Mamut, 76% of members have been influenced by one of 40 million recommendations posted by neighbors on the network.

Google has launched a new “Search by photos” or “Search photos of places” section in local search results on mobile devices, showcasing a highly sophisticated capability for matching search terms to relevant images and indicating once more that Google is making moves to capture the attention of visually-oriented users. The feature can be seen low down on the mobile SERP for some local searches, such as for jewelry and dentists. In the example I was able to pull up, the SERP for “earrings near me” showcased a section underneath the Google Shopping and local pack results and midway through the organic listings called “Search photos of places,” where photos matching my query were pulled out of listings and displayed. (Other users are seeing “Search by photos” as the title of the section.) Choosing “More photos” takes the user to a photo-centric page, something like a Pinterest board, that displays product photos overlaid with the name of the business, its average rating, and its distance from me. Clicking on any photo takes me to the main listing page for that business.

TomTom is “mapping our world for an autonomous future”

As it turns out, this isn’t exactly news; but I was surprised the other day to encounter a car on Highway 101 in Los Angeles with a sophisticated camera apparatus mounted on top -- and it wasn’t one of Google’s, or even Apple’s. It was TomTom’s. (See my hasty pic below.) Underneath the #TomTomCar hashtag on the rear window read the slogan: “Mapping our world for an autonomous future.” Turns out TomTom has been running its own Street-View-like initiative in Europe and the U.S. for a few years now. Here’s an article about it from 2015 which describes how TomTom, in partnership with Bosch, is using digital imagery captured by car-mounted cameras to create incredibly precise maps accurate to the decimeter level, anticipating the need for self-driving cars to detect exactly where they are in relation to lane markers and so on. It’s a useful reminder that interesting technological innovations are happening in the mapping world outside of Google.

The perils of keeping up with Google

Barry Schwartz has a new piece in Search Engine Land entitled “When parsing ‘Googlespeak’ is a distraction,” wherein he discusses the danger of trying to divine the deep meaning of every statement Google makes, especially in cases where the parts don’t seem to add up to a coherent whole. Given Schwartz’s long experience as one of the search world’s prime Google-watchers, it’s worth listening when he says, “Google’s ranking algorithms are complex, and the way one Googler explains something might sound contradictory to how another Googler talks about it. In reality, they are typically talking about different things or nuances.”

Schwartz assesses some comments by Google’s Gary Ilyes at Pubcon last week that suggest Google treats accuracy of content as a ranking factor. Ilyes’s statements would seem to contradict other Google commentators, like Danny Sullivan, who have claimed that Google looks for signals of trust and authority that indirectly indicate a piece of content is probably accurate, rather than assessing accuracy directly. As Schwartz correctly points out, both Ilyes and Sullivan are likely saying the same thing in essence, so we shouldn’t worry so much over the nuances. “Ultimately,” Schwartz writes, “SEOs, webmasters, site owners, publishers and those that produce web pages need to care more about providing the best possible web site and web page for the topic.”

The best-performing service area businesses, according to Google data

Jamie Pittman from Bright Local has offered a deep dive on Search Engine Land into the data on service area businesses in Bright Local’s recent Google My Business Insights Study. Pittman surveyed results from a range of service verticals including repair, plumbing and HVAC, construction and roofing, landscaping, cleaning, tradesmen, and locksmiths, finding that repair as a category had the most monthly searches and the greatest number of website visits and calls, while locksmiths and landscapers tied for the greatest number of photos in the average listing. Generally speaking, searchers looked for service area businesses using ordinary Google search rather than Google Maps. Most searches were for keywords like “repair” rather than the name of the business, a trend that also applies to most non-service area verticals. 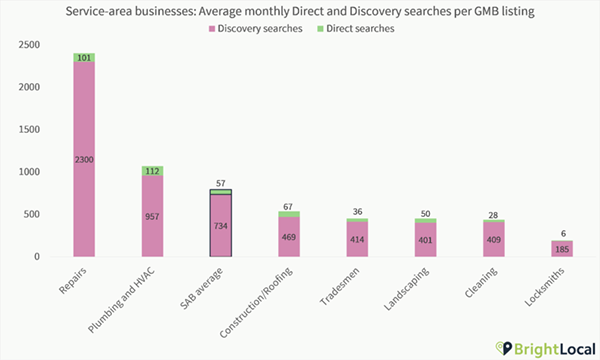