In this week’s update, learn about a new study validating Yelp reviews; a spike in hijacked GMB listings; removal of bank reviews from the local pack; brands struggling with consumer loyalty; big ad gains in Q3 from major tech companies; and the top ten GMB changes in 2020.

Federal Trade Commission economist Devesh Raval has released a new report that studies rating distribution and review quality on multiple sites, including Yelp, Google, Facebook, HomeAdvisor, and the Better Business Bureau (BBB). The study found that Yelp and the BBB contain the most evenly distributed ratings for businesses, whereas ratings on the other sites tend to skew highly positive. 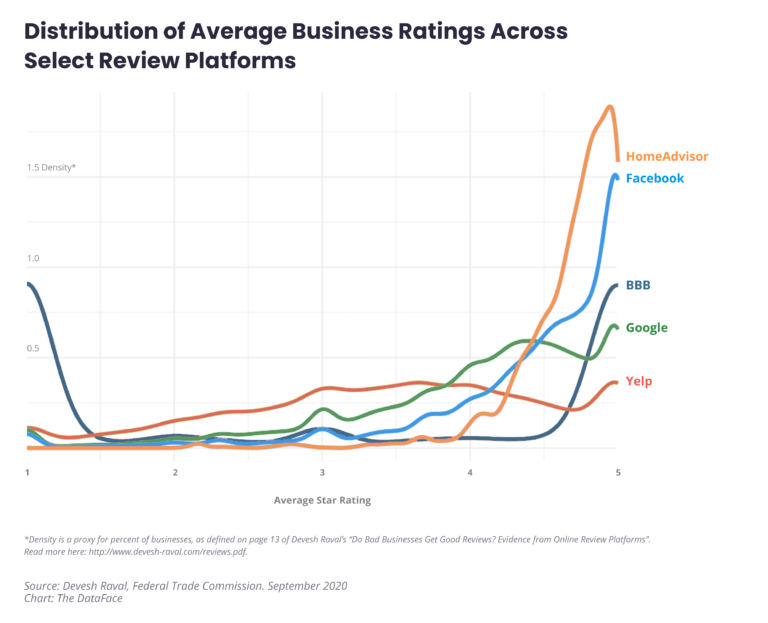 Yelp’s blog post on the topic notes that a separate study in 2018 found that four-star reviews tend to be more persuasive to consumers than five star reviews, increasing purchase likelihood by 19%.

Raval’s report suggests that a significant number of fake reviews are likely not being caught by Google, estimating that one in four Google reviews for low-quality businesses (as determined by the BBB) are likely to be fake. The study also finds that review text differs significantly between publishers; on Yelp, reviews are an average of 593 characters in length, whereas Google reviews average 250 characters, with about 22% of ratings containing no review text at all. Yelp requires review text while Google does not; Yelp suggests in its assessment that reviews with text are far more informative and helpful to consumers.

Joy Hawkins is reporting a significant increase in the last two months in users gaining access to GMB listings with ill intent. She offers the example of a business management consultant whose listing was hijacked by an entity that sells leads to personal injury attorneys. Hawkins speculates that the recent uptick in suspensions is related to the rise in hijacked listings as Google attempts to combat the problem.

Now that users can request access to already claimed listings using the “Claim this business” option, scammers may be using this as a tactic to gain access to listings. Such claim attempts generate an email to the listing owner requesting access; Hawkins suggests any such emails should be immediately deleted.

For some reason, keyword searches for banks are no longer showing reviews in the local pack, as pointed out on Twitter by Krystal Taing and reported by Barry Schwartz on Search Engine Roundtable. Mike Blumenthal, replying to Taing, pointed out that the letters A, B, C in the local pack indicate that Google is interpreting the search as branded, which would tend to suggest that there may be a bug involved. Blumenthal reached out to Google’s Danny Sullivan on Twitter, who responded that he would look into the issue. Reviews for banks still appear normally in the local finder and in Google Maps. 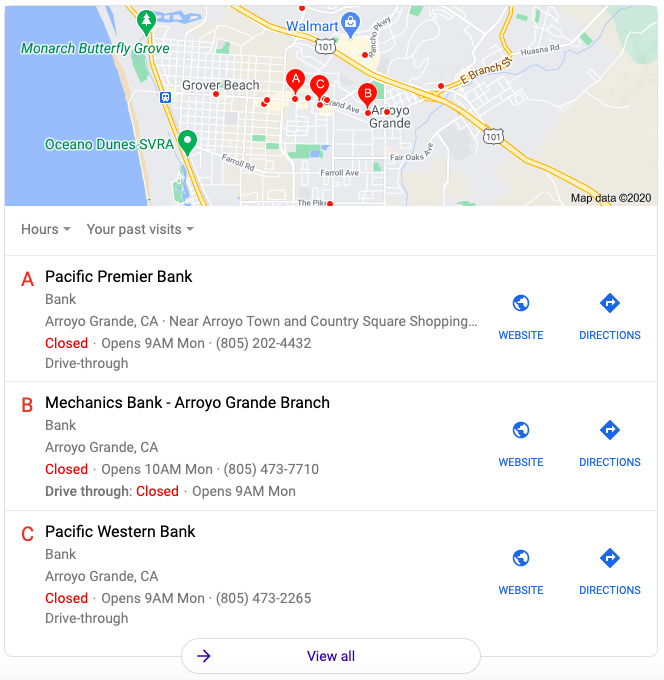 Screenshot of a local pack for “banks near me”

The challenge presented by the pandemic has caused brands to pivot to new and more creative methods of personalized marketing, as Stephanie Miles points out in a recent piece on Street Fight. Customer loyalty, according to a study from Wharton Baker Retailing Center and WisePlum, took a hit during the early COVID period, with 35% of shoppers dropping loyalty to brands when they encountered problems with finding the items they needed. At the same time, an increasing number of customers are spending more time online, exposing them to increased competition from rival companies.

According to Oz Etzioni, CEO of Clinch, a company specializing in ad personalization, brand marketers this holiday season need to create sequential messaging that can reach consumers at various stages in the purchase journey. Successful marketers, says Miles, will be those who can “capitalize on ... shifting purchasing patterns without losing sight of the loyalty they’ve managed to establish with existing customers.”

The COVID-19 pandemic may have contributed to notable gains in ad revenue reported by Google, Amazon, and Facebook for Q3 2020. Amazon is perhaps the most obvious beneficiary of pandemic changes in consumer behavior, with so many consumers turning to online alternatives in 2020. The company reported 37% overall year-over-year revenue growth in Q3, with ad revenues up 50% at $5.4 billion. Google saw gains of 6% in paid search and 32% in YouTube advertising, with total ad revenues of $37 billion. Facebook reported $21.5 billion in Q3 revenue, 99% of which comes from ads -- a 22% increase from last year.

Online commerce due to the pandemic was a major growth driver, with Facebook identifying online commerce as its biggest ad vertical and enabling ecommerce solutions on Facebook and Instagram for small businesses. Indeed, popular ecommerce platform Shopify saw a remarkable 96% in revenue growth year over year. But offline commerce saw increased attention as well, with Google driving more consumers to stores with local availability in its fight to compete with Amazon.

Sterting Sky’s Colan Nielsen has a new post on the Moz blog outlining the most significant GMB changes in 2020. Sterling Sky, according to Nielsen, has tracked 54 separate GMB updates so far this year, and he identifies ten that are particularly important:

Nielsen predicts that Google will make further changes in the near future to accommodate business models emerging out of the pandemic, such as telehealth.