In a still-developing story, an apparent update — or possibly a bug — has affected Google local ranking for many businesses. The update, centered around November 5 and 6 according to analysis from BrightLocal, has been a topic of discussion in the local SEO community for the last few days and appears to be quite volatile, with many businesses improving or decreasing in rank for various keyword searches. No clear pattern has yet emerged, though some have noted that proximity (nearness of the business to the location of the searcher) may have become a more prominent factor than before. Other commentators have speculated that the changes look more like a bug than a feature, which suggests they could potentially be reverted. 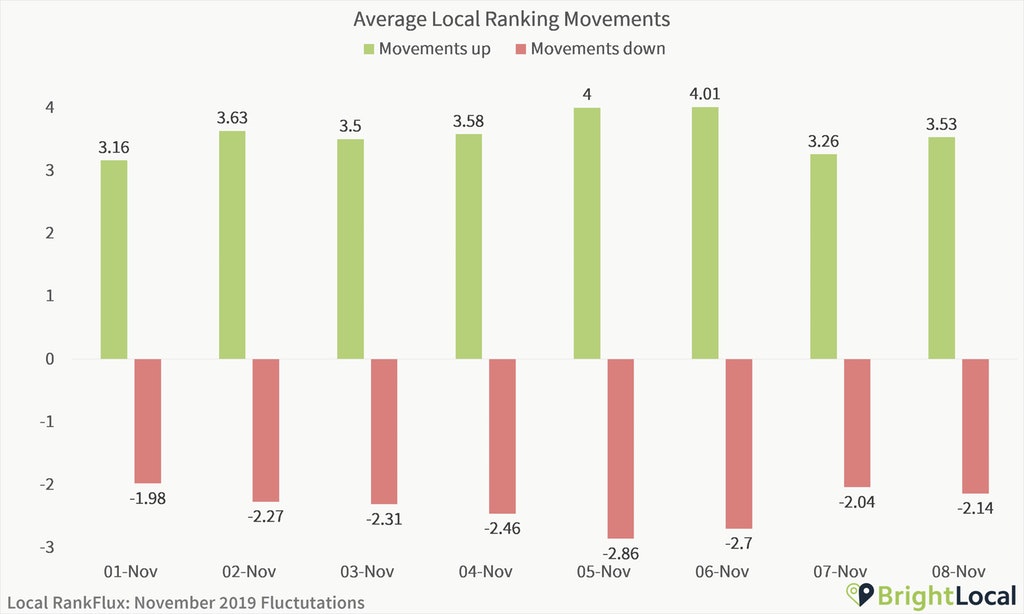 Google has announced that business indicating their service areas in Google My Business are now limited to a maximum of 20 service areas. There have been a few updates to the service area feature in recent months, with Google removing the option to indicate service area coverage as a distance from a map point and, later on, removing all service area data from businesses who were still using the outmoded method.

This new limit is more flexible than it might seem, since Google allows users to indicate service areas by means of various identifiers including zip codes, city districts, entire cities, counties, and even states. Google will apparently suggest updates to users who list more than 20 service areas that will allow them to indicate coverage of the same geographic area. Though service areas can provide valuable information to consumers, most local SEOs agree that a business’s physical location is far more important as a ranking factor.

Google’s foray into health search for doctors … and consumers?

Google’s much-discussed acquisition of FitBit isn’t the only health-related activity the company is involved in. In fact, Google earlier this year announced the formation of a new division called Google Health, led by physician and health administrator David Feinberg, who recently unveiled Google’s plans to create a health record search tool for doctors powered by machine learning. Writing about these developments, Barry Schwartz has suggested that Google is well positioned to create a search tool for consumers that would do for healthcare what Google Travel has done for flights and hotels, a move which would be consistent with Google’s many recent moves toward verticalization in local.

Businesses can verify listings on Google via live video chat

I’m not sure when this first appeared, but it was news to me that some businesses can now verify their Google My Business listings via online video chat with the Google support team. This option sometimes appears, according to Ben Fisher, for businesses in “non-duress categories,” meaning categories that are not subject to special scrutiny due to high rates of spam. 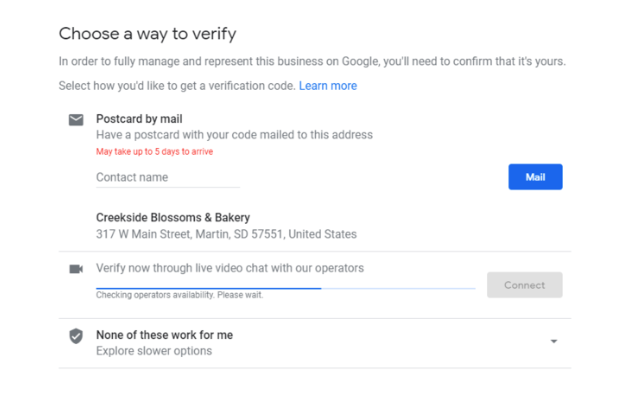 Mike Blumenthal notes on the GatherUp blog that Google My Business Q&A counts have been fluctuating for many businesses over the past few weeks, starting around the 10th of October. By November 6th, Blumenthal observes, the overall volume of questions on listings monitored by GatherUp had diminished by 55%. Ben Fisher discovered that the auto-suggest feature, where Google suggests answers as you type a new question based on previously answered questions (and other sources), appears to be drawing content from answers that are otherwise not visible to users. The Google support team has indicated they are investigating the problem.

Andy Simpson and Joy Hawkins have called attention to a useful tool that may reveal what Google knows about the images you post on your websites and local listings. The tool, available on Google’s Vision AI pages, allows any user to upload an image and have it analyzed by Google Cloud’s Vision API. Analysis may reveal whether images in your listings are likely to show up when users search for the items they depict, for example with the recently spotted “Search by Photos” feature for local searches.

I tested the tool by uploading a picture of Heidi Harmon, the mayor of San Luis Obispo, California, and was impressed that Google’s Vision AI correctly identified her, as well as noting that her face expressed “joy” (she is smiling) and that the objects in the photo included a mobile phone, which is not very prominent and shown at an odd angle.

It’s certainly possible that using this tool can help business owners test whether the pictures they use in listings and elsewhere will be properly understood in Google product searches, image searches, and other similar contexts.

Uber has confirmed plans to launch an ad platform for restaurants within the Uber Eats app. The news leaked as the result of a job posting for a Toronto-based Uber Eats Ads Lead. The company continues to look for new sources of revenue in light of declining stock prices and losses of $1 billion in the most recent quarter. Uber sees Uber Eats as a potential site for restaurant discovery, not just food ordering, meaning that restaurants may be willing to pay for the privilege of prominent placement — with ads being a source of revenue that the company would not have to share with restaurants and drivers.

Niantic, the company behind popular AR games Pokémon Go and Harry Potter: Wizards Unite, has announced that it will open up its sponsored locations program to small businesses, who can sponsor a Pokéstop for $30 per month and a Gym for $60. Though the game gets less public attention today than during its intense period of early popularity in 2016, it maintains a strong following and continues to generate impressive revenue. Previously, Niantic partnered with specific brands like McDonald’s to sponsor game-linked locations; this is the first time such sponsorships are being made available to a broader base of businesses.

Nextdoor is promoting its new Local Deals offering fairly heavily with email marketing. My wife’s photography business is listed in our Nextdoor neighborhood, and we’ve received several emails in the month or so since the launch of Local Deals, all of them touting the benefits of what Nextdoor is calling “the most targeted local advertising tool yet.” In its latest promotion, Nextdoor has focused its attention on Small Business Saturday, the shopping event following Thanksgiving. According to a recent email, “104 million shoppers spent a record $17.8 billion” on Small Business Saturday in 2018. Nextdoor is suggesting that businesses take advantage of the event by posting first-time customer deals, flash sales, and holiday promotions using their new ad platform.