In this week’s update, learn about Google’s new paid feature and online operating hours in GMB; a guide to Core Web Vitals; proximity as a less important ranking factor; and Yelp data showing consumer interest related to a surge in COVID-19 cases.

Tom Waddington posted a new find on Twitter last week: Google is apparently showcasing a new offer to some business owners within Google My Business to display Google Guaranteed status for $50 per month. Waddington explained that this was found in the GMB dashboard of an HVAC contractor, and that the offer may be showing up only to businesses who are already participating in Local Services ads, where Google Guaranteed has been available as an add-on feature for some time. Businesses who participate in the program are subjected to vetting by Google, after which Google guarantees the work performed. 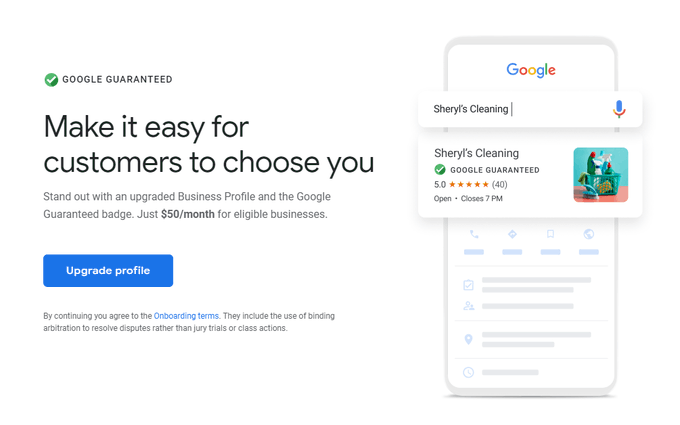 I reached out to Google for additional comment and was told that this is a pilot program, and that the team managing it will be making a formal announcement soon. The Google Guaranteed program, like Local Services ads in general, is available to a limited set of service categories, as listed in Google’s help documentation.

Despite these limitations, the news generated a big response in the local SEO community, with many commentators referencing an infamous survey sent out by Google last year that asked business owners if they would be willing to pay for features that would make them more prominent in local search results. A Google Guaranteed feature was mentioned in the survey, as were many other potential features that have yet to see the light of day. It’s too early to tell whether this limited pilot represents a serious move toward monetization on Google’s part, though many will be on the watch for further signs of this.

Google has added online operating hours to the set of options available in “More hours” for some Google My Business categories, as called out by Ben Fisher recently on Twitter. I’m able to see online operating hours in the dashboard for a pharmacy, a bank, a retailer, a restaurant, and a property management company, so the feature appears to be widely available.

You’ll probably recall that Google added the secondary hours feature to GMB earlier this year in order to highlight hours specific to certain offerings. Including special hours for delivery, pickup, drive through, and safe shopping for seniors, the feature was part of Google’s pandemic response. Online operating hours have, of course, become especially important during the pandemic, with many businesses offering virtual appointments, consultations, viewings, and similar services.

A guide to Core Web Vitals

Detlef Johnson has published a helpful guide to Core Web Vitals for SEOs on Search Engine Land. He notes, as I reported last week, that Google will make Core Web Vitals an important part of the Page Experience ranking update that is slated for sometime in 2021.

Google will score web pages according to how quickly elements load that are important to user experience, focusing on three metrics: Largest Contentful Paint (LCP), the time it takes for the largest image or text block to load; First Input Delay (FID), the time it takes for a page to accept user inputs; and Cumulative Layout Shift (CLS), the degree of shifting that occurs during page load of images and other components. Johnson predicts that Google will include metrics related to page animations at some point in the near future.

Google’s Search Console and PageSpeed Insights already contain reporting on Core Web Vitals, so SEOs should have plenty of time to test and optimize their sites in advance of the algorithm update, which Google has said it will announce six months before it goes live.  There is also a Chrome extension that can measure pages as they load and flag potential problems.

Has proximity become less relevant as a ranking factor?

Miriam Ellis has an interesting post on the Moz blog, discussing the curious fact that, in the 2020 edition of Moz’s State of the Local SEO Industry survey, proximity showed a sudden drop from #1 ranking factor in 2019 to #3. As Ellis explains, proximity has been seen as a hugely important factor in the ranking of local listings since around 2017 -- when mobile usage eclipsed desktop and nearness to the user became more significant in Google’s eyes than any other factor. 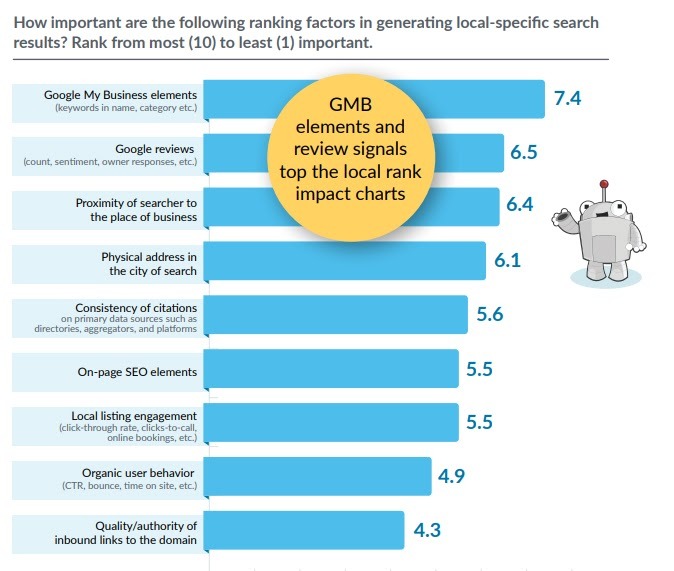 However, in this year’s survey, local SEO experts ranked proximity third, behind Google My Business elements like keywords in name and category, which took first position, and Google reviews, which was second.

Ellis offers a few theories for the shift away from proximity. She notes quite correctly that Google’s local algorithm is complicated, and that for many local queries, proximity may not produce the best results. Agencies who work with businesses like restaurants and cafes, where proximity may be weighted more heavily by Google, may rank it more highly, while those who focus on other categories, such as professional services or car dealerships, may underrate proximity since Google is focusing more on other factors like relevance and prominence.

My own takeaway from this result is that local SEOs are focused these days on a significant number of new features from Google that allow businesses to differentiate themselves from the competition, and are observing that these factors, along with the influence of reviews,  can play a powerful role in balancing out the impact of proximity.

New research from Yelp shows that increased interest from consumers in May related to restaurants, nightspots, and gyms correlates with an increase in COVID-19 cases in June. In many states, the report notes, a return to normal was signalled during the month of May. The report states, “As people began resuming common pre-pandemic activities across states like Florida, Nevada, South Carolina, Texas, Georgia, and others -- specifically, frequenting restaurants, bars and nightlife, and gyms -- a clear spike in COVID-19 cases within those locations quickly followed.”

In fact, the ten states that saw the largest increase in COVID-19 cases in June, according to the report, all saw more than a 50% increase in consumer interest in restaurants, nightlife, and gyms in May, relative to lower levels during the shutdown in March in April. States where consumer interest in these categories was lower saw a smaller incidence of new cases.

Yelp’s report contains numerous other metrics that will be of interest to those tracking the economic impact of the pandemic on local businesses across a broad range of industries. As an example, the screenshot below shows businesses that have recently begun to see an upsurge after declines in consumer traffic during the early stages of the pandemic.