A post on the Google Maps blog entitled “Google Maps updates to get you through the holidays” compiles several recent feature announcements and adds new features Google will launch to help consumers throughout the holiday season. According to the post, Google has added “nearly 250 new features and improvements” to Maps since the start of the pandemic, citing in particular live busyness as well as health and safety information.

The post discusses four ways Google is helping consumers during the holidays:

Google notes that despite reduced usage during the pandemic, the Google Maps app is still regularly used by 1 billion people.

Apple Maps has unveiled a new feature that allows enterprise brands to publish a COVID-19 message on their business profiles. Messages are limited to 200 characters plus an optional URL pointing consumers to additional information. The new message is displayed prominently in the Apple Maps profile for the business, above hours of operation, address, and phone number, with a red icon for increased visibility. Currently, the COVID-19 message feature is available only for multi-location brands who update their information via Apple Maps enterprise partners, and not for SMBs who use Apple Maps Connect to manage listings. 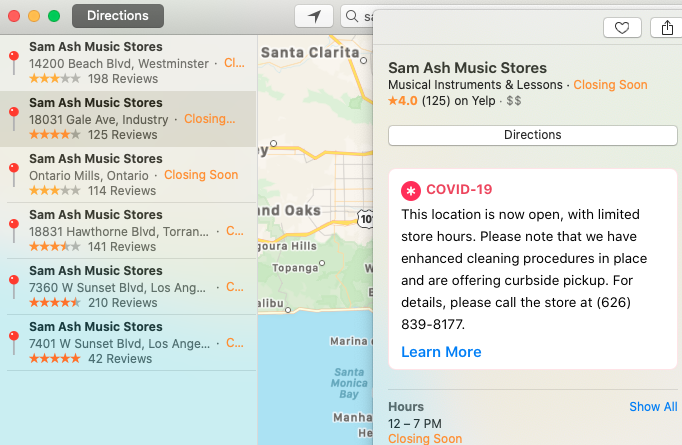 Some users are seeing interface updates in the GMB dashboard, as first reported on Twitter by Claire Carlile. The updates consist of a few new icons and buttons in the Manage Locations page, where users with access to multiple locations are able to see them in a list view. New icons include a pencil, presumably leading to the Info tab for that location, with a red dot that indicates pending updates; a camera icon directing users to add a photo or video; and a post icon directing users to the Posts tab for that location. In addition, there is a new “See your profile” button that links to the listing as displayed to the public in Search.

So, a tour of this new GMB dash 1) red dot next to ✏️ means there are external edits 2) add a photo/video 📷 3) add post (not present if no posts functionality for that biz) 🧐 and 4) view business profile in search #GoogleMyBusiness #LocalSEO pic.twitter.com/0IAVsM8IHE

There are no new features here, only a newly prominent means of accessing some features that Google presumably wants to call attention to. I’ve observed in the past that Google wants users to contribute unique, differentiated content wherever possible, with photos, videos, and posts being primary examples. I don’t yet see this new interface myself but I will check to see if it rolls out more broadly.

A new post on Search Engine Watch from Aleh Barysevich claims that social media is having an unprecedented influence on consumer buying decisions as the pandemic continues to modify typical consumer behaviors. Barysevish cites the increased time consumers are spending online before making purchases, and correlates this increased screen time with the fact that most users spend most of their online hours on social media. Studies, moreover, show that 71% of social media users are more likely to buy products because of referrals in social platforms.

Social media helps shorten the customer journey, Barysevich argues, by making it easy for consumers to initiate a purchase immediately after seeing a recommendation. Social media also offers social proof, with 81% of consumers saying their purchase decisions have been influenced by posts from friends on social media.

Even more power are social media influencers, who reach a broad base of followers primed to respond to their recommendations. Amazingly, some 50% of Twitter users have made a purchase as a direct result of an influencer’s tweet. According to Barysevich, the social platforms that are the most important for businesses to be involved on are Facebook, Instagram, TikTok, Twitter, and YouTube.

Google Maps has begun displaying the Google Guaranteed badge in some listings, as observed independently in the wild by local SEO experts Tom Waddington and Joy Hawkins. The badge is tied to Local Service Ads for home services, as opposed to the similar Google Screened program which relates to professional services. Google Guaranteed offers a money-back guarantee to consumers who are unhappy with the services of the listed professional, and costs the business an additional $50/month on top of Local Service Ads fees. As the screenshots show, the badge appears in some listing interfaces but not others. 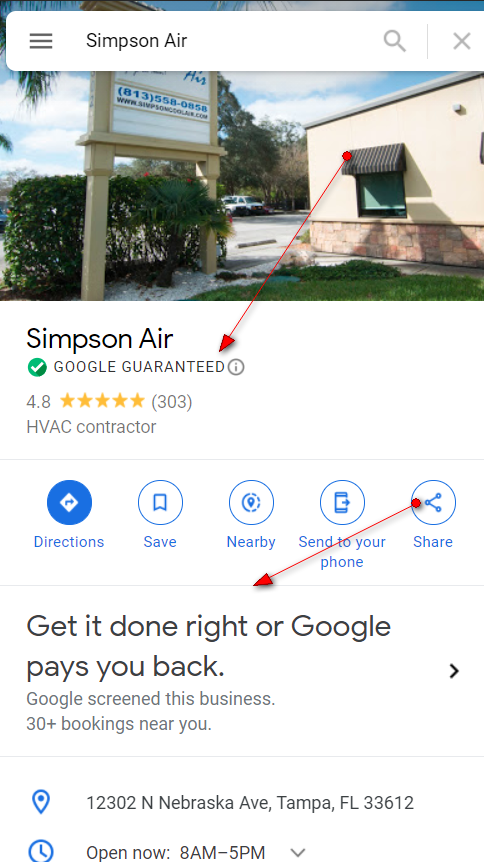 Some Google review responses not displaying

Many users in recent days have reported that business owner responses to reviews in Google My Business are not displaying publicly. According to Barry Schwartz’s writeup in Search Engine Roundtable, numerous reports of similar incidents have appeared in the Local Search Forum as well as the Google My Business help forum. One user reported responses going back about 12 weeks were not showing. Another said that, of the two business locations she is responsible for, one of them lost review responses going back several months while the other was unaffected. The situation seems to have improved as of the end of last week; it is unclear whether users are still seeing widespread problems with missing responses.