Google’s new help page “Changes to your Insights data” provides some clarification and additional information related to recent and upcoming changes to GMB Insights. In recent posts, we’ve discussed the addition of a new Performance page in Search and Maps that reports on customer interactions with your profile, keywords used to search for your business, and, most recently, a breakdown of views of your business on mobile versus desktop devices.

In the help page, Google signals that users will be seeing more “core profile metrics” displayed directly in Business Profiles (i.e., in or near the Knowledge Panel), with several updates to come in the next few months. The older versions of these metrics, Google says, “will eventually be removed from the Google My Business web and app platforms.”

The launch of Performance reporting (the name that is apparently replacing Insights) is still forthcoming in Maps, though some reports are live now in Search. Data will be available for 6 months, and interactions data will be updated daily, while other metrics will see monthly updates. Google says that some familiar metrics will see new update frequencies, some new metrics will be introduced, and some will move over from GMB unchanged.

Several observers, starting with Tom Waddington on Twitter, have been noting the appearance of star ratings in the review summaries Google often displays at the top of the review feed. Ratings seem to be appearing for most users and across multiple verticals. Review summaries, as you may recall, are those short statements taken from reviews that Google surfaces in order to provide quick takes for searchers who may not want to take the time to read several reviews. Just two weeks ago we reported on another change where some summaries show the number of people who mentioned a topic.

The new ratings appear to provide useful context at least according to some examples, such as the screenshot below, where the summaries aren’t especially positive, but the ratings suggest the overall customer experience was relatively good. 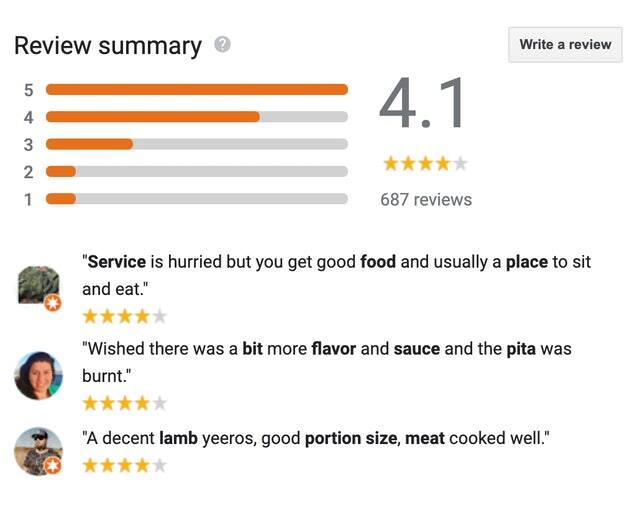 As noted by Thibault Adda of Darden Restaurants on Twitter, Apple Maps has begun displaying menu buttons on Maps profiles for certain restaurants. These buttons seem to be largely sourced from Yelp, according to a writeup by Barry Schwartz. In response to Adda’s post, Uberall’s Krystal Taing noted that menu links can be populated by Apple Maps partners via a feature called “action links.” Action links allow businesses to link from Apple Maps to another app, in this case Yelp. The feature also supports use cases such as linking to food ordering apps. 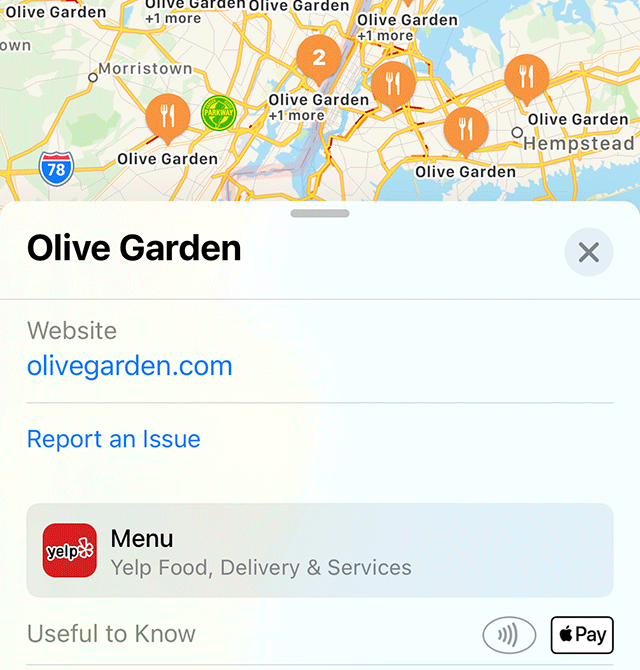 Google says that beginning on April 6 it will begin to enforce consistency between pricing of products in the Merchant Center and prices shown to customers at checkout. The policy is not new, but Google is now saying that merchants who show a higher price during checkout than what is displayed on your Google Shopping ad or free product listing, your account may be suspended. Google’s announcement notes that it’s ok for prices to be lower at checkout due to special promotions, but they cannot be higher than previously advertised. Merchants flagged for violations will have 28 days to fix the problem before their accounts are suspended.

Google has recently clarified the guidelines around GMB listings for co-working spaces, noting in an update to the “Guidelines for representing your business on Google” help page the following information: "Businesses can't list an office at a co-working space unless that office maintains clear signage, receives customers at the location during business hours, and is staffed during business hours by your business staff." In other words, Google doesn’t want businesses to use temporary office locations as the address of a GMB listing. If you do use co-working space to run your business, it needs to be a permanent business location with appropriate signage and staffing.

In another of Colan Nielsen’s followup articles to Sterling Sky’s Local SEO Blackbelt Quiz, he writes about GMB listings for appointment-only businesses, explaining that this business type does indeed qualify for a listing. Google says that businesses open by appointment only, such as a home-based massage business, should not include hours of operation in their listings. Virtual offices that are used occasionally to meet clients by appointment would not qualify for a listing (see the previous item), since such offices must be staffed during regular business hours. Nielsen reminds us that businesses who are open by appointment only should include the Appointment Required attribute in their listings.