In this week’s update, learn about Google’s support for virtual services; Foursquare’s new Recovery Index; a spike in big box store visits; consumer preferences for returning to stores, according to Salesforce; changes to the GMB COVID-19 help page; and the real deal on May’s local ranking update.

In a blog post last week, Jen Fitzpatrick of the Google Maps team announced several updates under the title, “Google’s new tools help businesses during COVID-19.” The new COVID-19 support posts for small businesses, which we discussed here two weeks ago, have been rolled out to 19 additional countries according to Fitzpatrick, and will become discoverable in Search and Maps over the next few weeks.

The post also noted that Google has added attributes to GMB profiles for virtual services, including “online appointments,” “online classes,” and “online estimates.” These attributes are available now for select business categories and will be displayed prominently in published profiles, similar to the recent showcasing of pickup and delivery for restaurants and retail. So far, we’ve seen online attributes for businesses in categories like insurance, banks, home builders, and cleaning services. 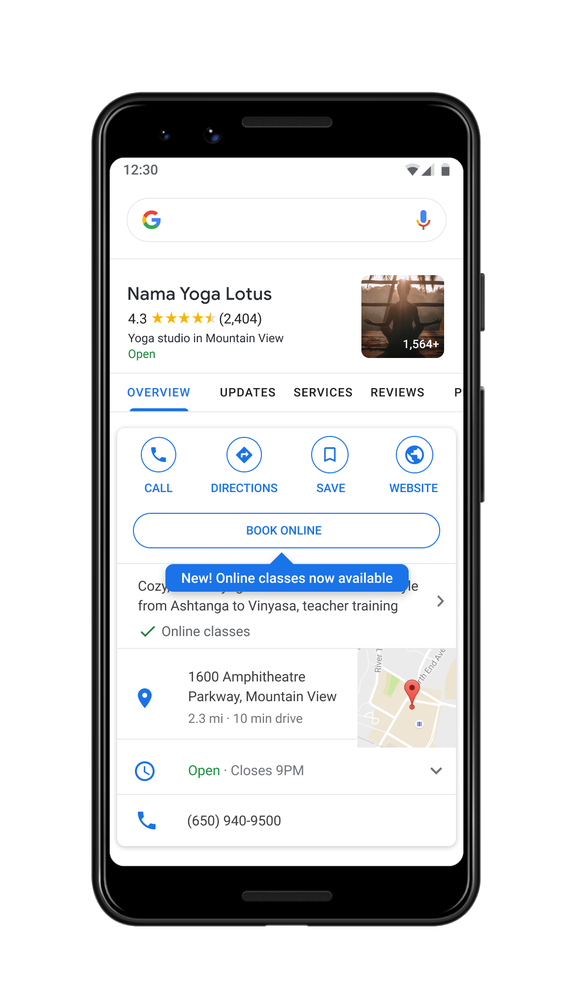 Foursquare has published the Foursquare Recovery Index, a measure of foot traffic trends as consumers begin gradually returning to stores and other public places. The study extends from an earlier series of foot traffic studies that quantified the impact of business closures and sheltering at home from the early days of the pandemic.

The new Recovery Index presents a rolling tally of the last seven days of foot traffic patterns by place category, state, and county, reporting both week-over-week trends as well as the delta between foot traffic on the selected date and traffic from the pre-COVID period. Data can also be viewed for the country overall.

As an example, the table excerpt below shows the top ten categories by week-over-week increase as of May 20. It’s not surprising to see that visits to beaches are way up compared to February; much more notable are the gains for categories like Apparel Retail, Hotels, Fitness, and Bars, which although still much less frequented than during the pre-COVID period are clearly demonstrating a trend toward normalcy. 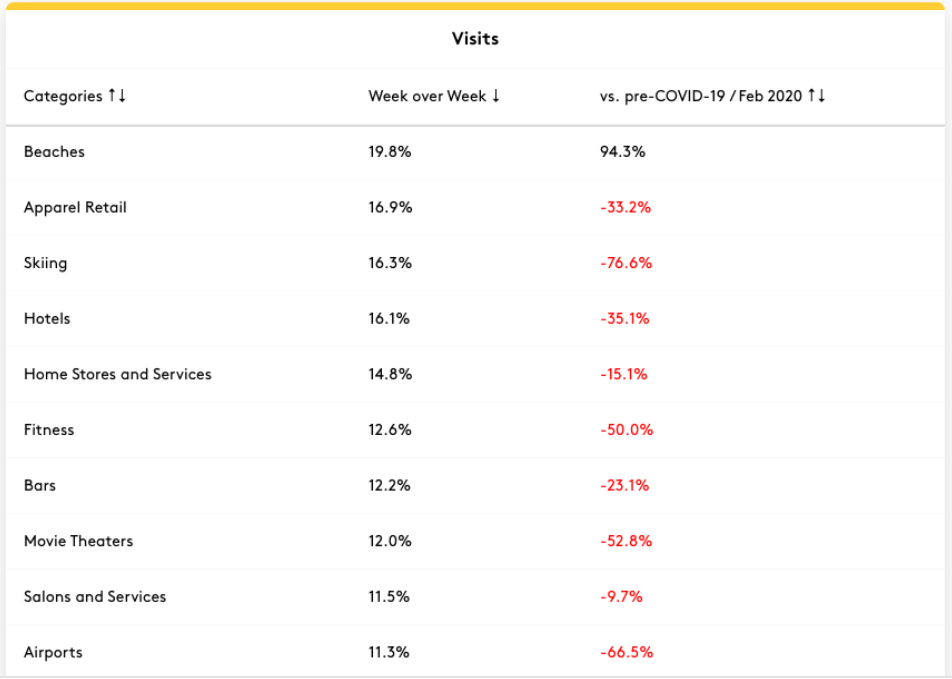 Excerpted table from Foursquare Recovery Index for May 20, 2020

A new study of store visits to big box stores in California, Georgia, Nevada, New York, Texas, and Wisconsin, from analytics firm MFour, notes big increases in all cases. New York leads the pack with a 50% in visits compared to six weeks ago. This is compared to a huge decline in visits according to the study, with the lowest point occurring in late March and early April. For New York in particular, visits are at a higher rate now than at any time since before the pandemic began. 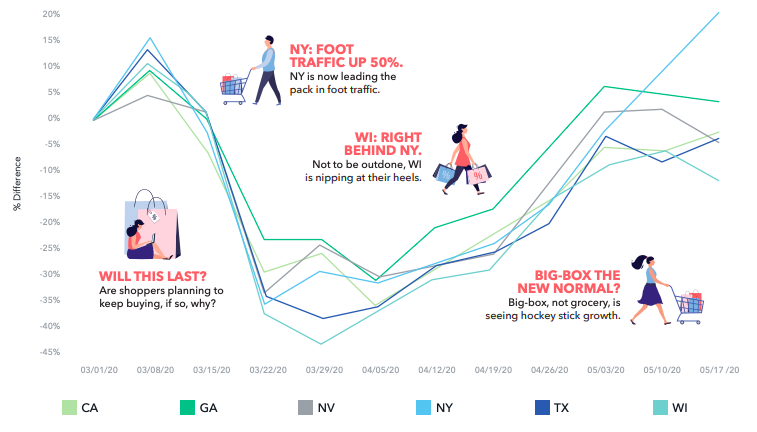 Consumer preferences for returning to stores differ by age and gender

A new consumer survey from Salesforce finds that older consumers are more cautious than the younger demographic about returning to in-store shopping, and that women exhibit greater concerns than men.

Salesforce also asked consumers about modified shopping habits due to the pandemic. Some 44% reported that they were shopping more online, and 68% said they were likely to buy essential products online even after the pandemic has subsided. In addition, 37% of respondents said they were using contactless delivery more, 29% were increasing their use of BOPIS, 28% were using self-checkout more, and 27% were increasing their use of contactless payment methods. Amongst the respondents, 44% decreased discretionary spending during the pandemic.

Google’s help page “Limited Google My Business functionality due to COVID-19” was modified last week with the following changes:

In the previous version of the “Reviews, Q&A, and more” section, last updated on April 28, Google noted that review replies were restored and other features were gradually returning. Now the section reads, “Review replies, user reviews, user photos, and Q&A are now available in all countries,” but notes that the following services are still unavailable:

As reported here at the beginning of last month, many local SEOs reported ranking volatility in local results in early May that were greater than any changes seen since last November’s neural matching update. There was speculation at the time that the changes might be tied to the May core algorithm update which had occurred just days earlier. Now, we learn that the whole thing was a bug. This was confirmed last week by Google’s Danny Sullivan, who responded to evidence of ranking changes provided to the company by Joy Hawkins, Colan Neilsen, and others.

Just wanted to update. Thanks for the examples. They helped us find a bug that we got resolved about about two weeks ago, and that seems to have stabilized things since.

As Hawkins noted in her writeup, this is the first time we’re aware of when major ranking changes turned out to be the result of a bug that was subsequently corrected. So although it’s possible that such an event might occur in the future, ranking fluctuations in general are much more likely to be caused by updates to Google’s local algorithm.

The Google Schemer Shutdown & What It Potentially Means for Foursquare