In our last update for 2020, read about the latest GMB API update; a new location service from Amazon; the impact of “People Also Ask” on brand reputation; notes from a former Google quality analyst; listings for mobile food trucks; and the characteristics of top-performing grocery stores.

In its latest update to the Google My Business API, Google has reintroduced support for hotel attributes and has added insurance information for healthcare providers. This release brings the API to version 4.8. It’s the first update to the GMB API since rich food menus were added back in the summer, and the fifth update overall this year, making 2020 the busiest year for the GMB API since its release in 2015.

The history of hotel attributes in GMB is a circuitous one. Last year, Google updated and greatly expanded the attributes available to hotels in the GMB dashboard, but in doing so, broke API support for hotel attributes entirely, making it difficult for hotels to access the new feature. Plans to correct the problem were interrupted by the pandemic, but Google has now reestablished full support for the expanded attributes. This includes recently introduced health and safety attributes, which are more detailed for hotels than other business categories.

Insurance information can be associated via the API with healthcare listings, based on a Google-maintained directory of insurance providers. In addition to these updates, Google has changed the format of review IDs; developers making use of the API for reviews are encouraged to update stored reviews to the new ID format within 30 days.

Amazon has created a low-cost alternative to Google Maps that will allow developers to add location data and maps to their applications. Offered as part of the Amazon Web Services family of products, the new Location Service is based on location data from Esri and HERE, two of the top mapping companies in the world. Described by Amazon’s Jeff Barr as an “economical, pay-as-you-go” alternative, the service arrives on the market only a few months after Google increased its pricing for location services, and so may be well poised to appeal to cost-conscious developers and startups.

Barr describes typical use cases for the service: “You can use Amazon Location Service to build applications that know where they are and respond accordingly. You can display maps, validate addresses, perform geocoding (turn an address into a location), track the movement of packages and devices, and much more. You can easily set up geofences and receive notifications when tracked items enter or leave a geofenced area. You can even overlay your own data on the map while retaining full control.” Developers already utilizing Amazon Web Services may find it more convenient to source location services from Amazon as well.

The impact of “People Also Ask” questions on brand reputation

JR Oakes, a technical SEO expert at Locomotive, has published an interesting study that attempts to measure the reputation impact of negative questions posted about a brand in the “People Also Ask” (PAA) section of Google search results. Oakes was intrigued by the seemingly common appearance of negatively biased questions for many companies, such as “Why is Apple so bad?” and “Is Pinterest a safe site?” as well as many instances of “Is XYZ Company legit?” Given the high search volumes for brand queries, Oakes argues that even those who don’t suspect a brand of negative practices may find themselves influenced by the presence of negative questions.

In his analysis, Oakes found that PAA content for some brands is distinctly more negative than for others, though the reasons for these differences are not easy to discern. For example, he finds a correlation between sentiment of PAA and economic growth of the company referenced, where the companies with more negative questions tended to exhibit weaker growth in 2019-2020 than those with positive PAA. But in this case, the presence of negative questions like “Is XYZ Company going out of business?” may merely reflect tough economic realities.

In other cases, the analysis shows that there may be an unfair, or unwarranted, bias in PAA where a small minority asking a negative question may create a distorted picture of the brand. 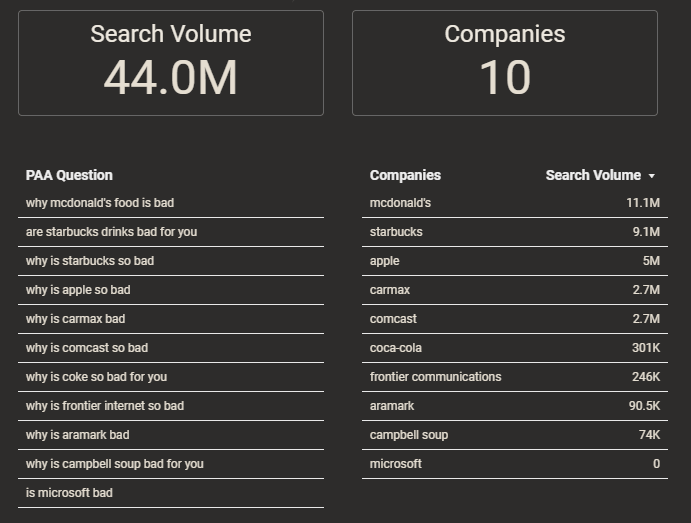 Former Googler Pedro Dias has a post on Search Engine Land that covers many of the fine details of how search algorithms work and how they differ from other actions, such as manual penalties, that may impact search results. Dias explains that it’s best to think in terms of algorithms, plural, rather than assuming “the Google search algorithm” is a unitary thing. Google has quality algorithms, which Dias compares to recipes, designed to accomplish specific tasks, usually at the point when search engine results are shown to the user. The intent of Google’s quality algorithms is to adhere to the preferences expressed by actual users who rate websites according to Google’s Quality Guidelines.

Algorithms have confidence thresholds, set by engineers, which are intended to identify cases where results require manual intervention because the algorithmic result may be incorrect. Often, manual actions are necessary to “counteract manipulative intent,” in Dias’s words, where a web developer has been able to exploit a weakness in an algorithm. As Google moves more heavily into artificial intelligence and machine learning, the need for manual actions should decrease.

How to create a Google listing for a mobile food truck

Sterling Sky’s Colan Nielsen has begun a series of posts addressing questions in the company’s 2020 Local SEO Blackbelt Quiz. In the first of these posts, he addresses the question, “Can a food truck have a GMB listing if they don’t have a permanent location?” According to Nielsen, of 900 quiz respondents, about 77% answered correctly that yes, food trucks can have listings. There are two options. You can claim a GMB listing as a service area business, but this means you will not have a pin on the map. For food trucks that have a semi-permanent location and would prefer to show up with a map pin, the best option is not to claim their GMB listing but rather add their location directly to Google Maps, following Google’s guidelines. This method will allow the business to rank in Google local results, though the owner won’t be able to utilize GMB features such as review response.

Miriam Ellis has a new post on the Moz blog outlining the commonalities among top-performing grocery stores in 50 U.S. cities. Ellis found that being physically located within the city named in the search query was correlated with top ranking 100% of the time. She also found that:

Ellis’s post covers many other details such as Google Posts, delivery and curbside pickup attributes, and Q&A.