In this week’s news, learn about Brandify’s new chapter as we join forces with SOCi; Apple’s updated Places on Maps interface; Snapchat’s My Places; consolidated food ordering options for restaurants on Google; continued support for multi-location GMB Posts; and a broad rollout of sustainability attributes for hotels.

Though I don’t ordinarily share Brandify news in this forum, news this big doesn’t come along very often. So I would be remiss not to mention that, as announced last week, Brandify has been acquired by SOCi, Inc., a company based in San Diego, California that has been in the local marketing space for a decade. Led by founder and CEO Afif Khoury, SOCi has built an impressive platform that, like Brandify, helps multi-location brands connect with consumers through digital channels. What’s going to be especially compelling for our brand marketers in the audience is the highly complementary nature of Brandify’s offerings combined with SOCi’s, and we’re all excited to share more about that in the coming days. Suffice to say for now that Brandify plus SOCi is going to take localized marketing to the next level.

In the near future, you’ll see our branding change as we work to transition to the SOCi name, and we’ll have a chance to introduce you to some of the great people there, even as the same familiar Brandify faces continue to do what we do for all of you. The one exception is our fearless leader Manish Patel, who, after nearly 25 years at the helm, is departing to launch a new startup focused on hyperlocal advertising. We wish him every success in his new venture. If you’d like to learn more about our new company, check out the press release announcing the acquisition or visit the SOCi website at https://www.meetsoci.com/.

Apple Maps Connect, the portal that allows small businesses to claim and update their Apple Maps listings, has been rebranded as “Places on Maps,” with an updated interface and a few new features. Businesses are invited to claim their listings by answering a phone call from the place of business or uploading an official document that proves ownership. Apparently, listings previously claimed under Maps Connect will need to be reclaimed in the new interface. Once claimed, you can manage your basic business information as well as configuring App Clips, which Apple describes as “a small part of an app that you can use to do something quickly, like rent a bike, pay for parking, or order food.”

Apple points out that managing your Apple Maps listing ensures your business will display properly in Wallet, Safari, Siri, and Spotlight, in addition to Maps itself. Places on Maps is now part of a larger platform called Apple Business Register that includes three other components: Brands (“Review your publicly recognizable brand / trade names and logos”); Members (“Add team members to assist with managing this organization”); and Locations (“Review your locations in Apple services”). Businesses making use of Apple Business Register can also connect Apple Messages to their organizations. 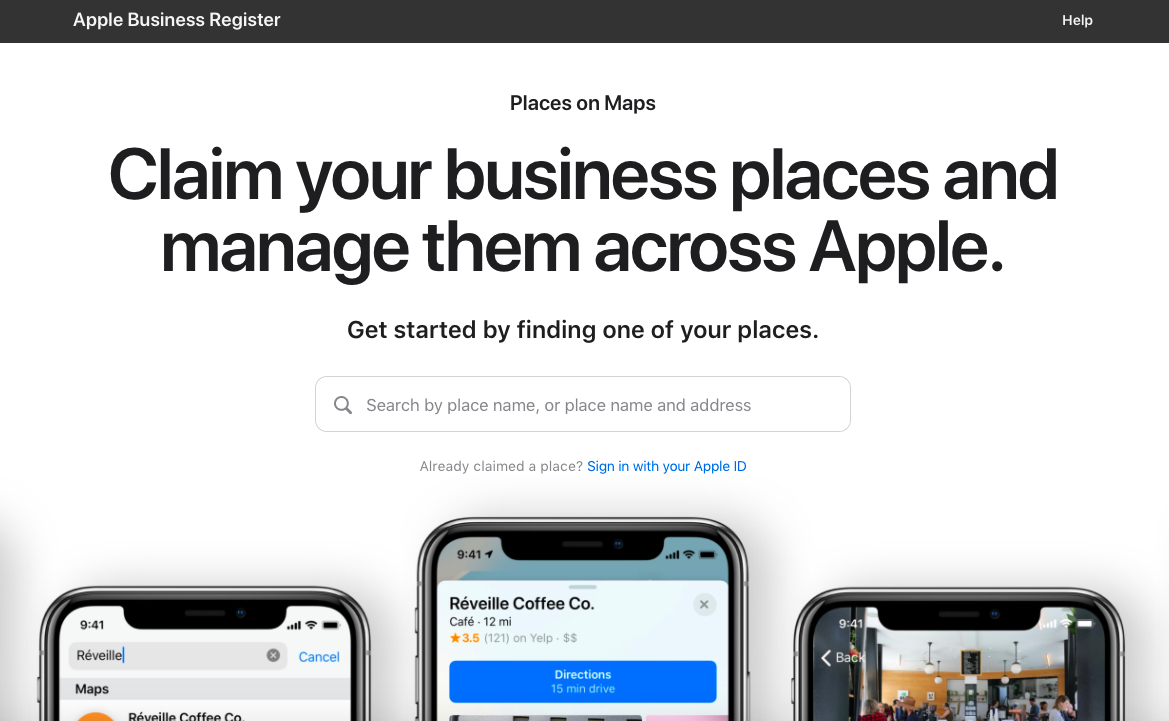 Not to be outdone, Snapchat too has launched a new Places-themed tool called My Places, which the company calls “a new way for Snapchatters to explore the world with Snap Map.” Snap Map, as you may recall, is an in-app map interface where Snapchat users can view the locations and Stories of friends and others who have opted to make their content public, as well as the locations of nearby businesses and places of interest. Snapchat claims that 30 million local businesses now appear in Snap Map (sourced primarily from Foursquare); the new My Places tool lets users mark favorite spots and get recommendations from friends and the Snapchat community. The announcement also mentions that integrations with restaurant review site The Infatuation, as well as Ticketmaster, are planned for later this year.

A contact at Google mentioned to me that a reorganization of food ordering options is underway for restaurants. For a while now, there have been two different callouts for ordering pickup or delivery from the restaurant directly or through a third-party delivery service. One is the “Order” button that may appear at the top of the business profile, which launches the end-to-end ordering interface called Order with Google; the other is the “Order” heading further down the profile, which links out to available ordering platforms where transactions are completed outside of Google. Now, starting with mobile, users will see all ordering options under the “Order” button, as demonstrated in the screenshot. (In this example, ActiveMenus is integrated with Order with Google, whereas Red Robin’s website is not.)

Google has made it clear that Posts for multi-location brands will be supported for the long term by the Google My Business API. Posts were, for a long time, prohibited for API users if an account had 10 or more locations -- back then, Google told us that they were trying to prevent publication of duplicate content and wanted each Post to be a unique offering from the business location. All of that changed after the onset of the pandemic. We were among those who appealed to the GMB team to be able to communicate changing circumstances during the shutdown quickly and broadly in a flexible manner, and Posts was the most obvious way to do this. So Google lifted the location limit in what was said to be a temporary measure.

Multi-location Posts were, at first, only permitted if they were COVID-related, but that stipulation later disappeared from the API documentation. (I noticed it was gone in mid-2020, whereas Mike Blumenthal’s writeup, linked above, says it went away last week -- this may have something to do with Brandify’s GMB partner status which gives us access to different versions of some of the docs.) It was apparent that Google was able to see the value of Posts for brands and that long-term support would be likely. Now, the API documentation confirms this by stating, “Small businesses and large chains are eligible to create posts.”

Users are spotting new hotel attributes in the GMB interface that relate to sustainability and various ecological certifications. For example, hotels can now specify, under “Water conservation,” that they have towel and linen reuse programs in place, and under “Sustainable sourcing,” that they offer locally sourced food and beverages or eco-friendly toiletries. Other sustainability headings include “Energy efficiency” and “Waste reduction,” each with a broad range of options. Certifications such as Green Globe, Hilton LightStay, and LEED -- among many others -- can be displayed as well. Google began sourcing these attributes directly from hotels earlier this year; now any hotel can configure them in the GMB dashboard.

Sample of new Sustainability attributes for hotels in GMB dashboard