In this week’s update, learn about the appearance of Black Lives Matter Plaza in Google Maps; the addition of secondary hours in Google profiles; destination page highlighting for featured snippets; the role of voice tech in retailer reopenings; the value of location data during COVID-19; and signs of waning interest in local reviews.

On Friday, June 5, in commemoration of the protests in Washington, DC, and around the country objecting to the wrongful death of George Floyd and to police brutality in general, DC mayor Muriel Bowser declared that a section of the street leading to the White House would be renamed Black Lives Matter Plaza. The street was painted by volunteers with bright yellow letters reading “Back Lives Matter,” and the slogan could reportedly be seen from space.

Within a day, Google Maps was reflecting the name change, as noted by Mike Blumenthal and first noticed by Hector Rovira. The move signals, at minimum, a nimble response by the Google Maps team to reflect the reality on the ground in light of fast-moving current events. Nearby St. John’s Episcopal Church, the destination of a controversial visit by President Trump on June 1, is labeled in Maps as an “Episcopal church visited by presidents.”

A new “More hours” section in the Google My Business dashboard allows business owners to specify secondary hours for a variety of services, differing according to the primary category of the business. For instance, pharmacy listings are presented with these options:

Whatever the business category, secondary hours display near regular hours in the business profile and elsewhere, as shown below: 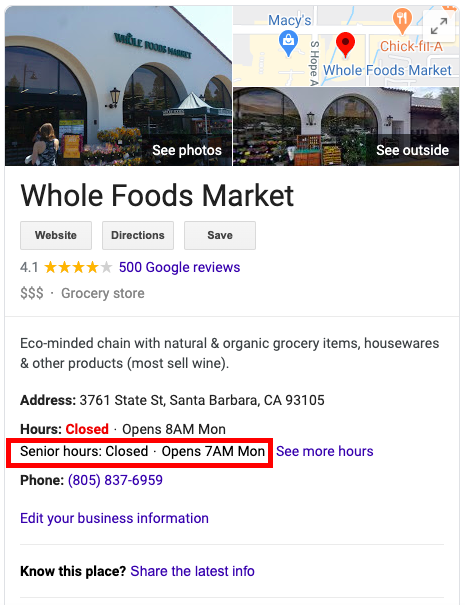 In desktop search, users who click through to the website from a featured snippet will now see the content in the snippet highlighted in yellow on the destination page. This is a feature that first appeared in mobile search a couple of years ago, and has finally made its way to desktop. The change is intended to showcase clearly to users the content that resulted in the creation of a featured snippet in search.

Though this update might at first seem to have little to do with local search, in fact featured snippets are a common search result type for many questions consumers may have about specific services offered by local businesses. For example, when I asked Google, “Does CVS accept Apple Pay?” the response was a featured snippet from a Mashable article:

Of course, featured snippets support many use cases outside of local search, but it remains true that many specific questions that may be posed by consumers about local businesses are more easily answered via web content, from the business website to secondary sources such as news sites. Featured snippets with the new highlighting feature may help to provide authoritative answers to these questions.

A new column from Stephanie Miles at Street Fight makes the case that voice technology was especially well poised to meet consumer needs during COVID-19, given its emphasis on contact-free communication. Indeed, smart speaker sales rose 6% in the first quarter of 2020, a modest gain in most contexts but monumental in light of tanking sales for so many other business categories during the pandemic.

Industry observers expect we will see further movements in contact-free information gathering and payment at grocery stores, airports, and parking garages in the near future, making use of existing technologies to offer safer transactions to health-conscious consumers.

Location data as a marketing asset during COVID-19

Location data experts weighed in during a recent session of Live with Search Engine Land, noting that smartphone data measuring foot traffic patterns shows many consumers are eager to return to stores. Foursquare CEO David Shim says that effective brand messaging is especially critical at this time, when many consumers are poised to reexamine brand loyalty in light of bankruptcies, store closures, and reduced availability. For brands who are seeing brand loyalty falter due to service interruptions, Shim notes that it’s critical to let consumers know you are back in business and ready to resume normal operations.

PlaceIQ CEO Duncan McCall argues that by measuring store visits to big-box stores like Costco before the pandemic and after, we can learn about modified consumer behaviors such as the likelihood to spread out shopping activities evenly throughout the week, where previous shopping patterns favored weekend and evening shopping. These modified behaviors can lead to changes in store operations and marketing campaigns.

Consumer interest in writing reviews may be waning

An update to GatherUp’s annual survey of consumer reviewing behavior suggests that US consumers may be tiring of writing reviews. The survey finds that for the second year in a row, 40% of consumers say they never write reviews, up from 31.5% in 2017.

Of course, the percentage of consumers who leave numerous reviews on a regular basis has always been low, but GatherUp’s research may point to a lessening in overall popularity of review writing. If true, this finding might signal a slowing of the massive growth in reviews, especially on Google, over the last several years.