In this week’s update, learn about a new guide to local justifications; a spike in Maps alerts for GMB owners; tactics for scoring well on Core Web Vitals standards; SnapChat’s local strategy; Google rewriting title tags in search results; and the non-relationship between review flagging and response.

A new guide to local justifications

Is 2021 the year of local justifications? It’s certainly one of the hottest topics these days in local search, with major coverage this year already having appeared from Tim Capper, Colan Nielsen, and Miriam Ellis among others. Now Joy Hawkins has a post on the Bright Local blog covering the latest and greatest about this small but important SERP feature.

As regular readers will know by now, justifications are snippets of text that appear in local search results to show the user that a listing is relevant to their query. If you see “Their website mentions: running shoes” in a local pack result after searching for running shoes, you’re seeing a justification. Hawkins breaks down the various justification types that have appeared in the wild so far, including “Sold here,” “Provides,” “In stock,” “Their website mentions,” and “Menu highlight” / “On the menu,” as well as justifications powered by content from posts and reviews.

For each type, she highlights whether the business can influence the appearance of the justification, along with other pertinent details and recommendations. She notes, for example, that “Their website mentions” justifications often link to the relevant content on your website, and can help you understand the terms you’re ranking for as well as providing new content optimization opportunities. Another interesting detail is that post justifications can appear in favor of other types and will tend to showcase your most recent posts.

Google getting more aggressive with push notifications for GMB owners

In recent days I’ve been noticing a sharp increase in the number of push notifications to my phone from GMB listings under our management. I’m getting these notifications because I’m signed in to Google Maps on my phone with my work email, the same email that has manager access to our Google My Business Organization account. Though receiving literally hundreds of push notifications every day is, to say the least, somewhat distracting, it’s also been instructive.

I know I’m not alone in this, because Carrie Hill has written an article for the LocalU blog about how to turn the notifications off, noting how the SMB locations she manages have been inundating her phone with alerts related to GMB messaging. In contrast, for the multi-location brands we manage, by far the most common notification type is “You have a new question” or “You have a new answer.” Most of our brands (challenged by the scale of doing so) have not yet delved into messaging, so this makes sense -- after all, large brands generate hundreds of new questions every week, most of them still left unanswered.

What’s illuminating about this feature is how transactional, even conversational, it feels to get an alert on your phone because a customer has a question about your business. If SMBs are receiving these, I’m willing to bet the rate of questions answered by merchants (which has been very low) will increase dramatically -- likely placing additional pressure on larger brands to provide a similar level of timely and attentive service. It’s a real sign that GMB is becoming more effective in bringing a social networking feel to B2C communications. 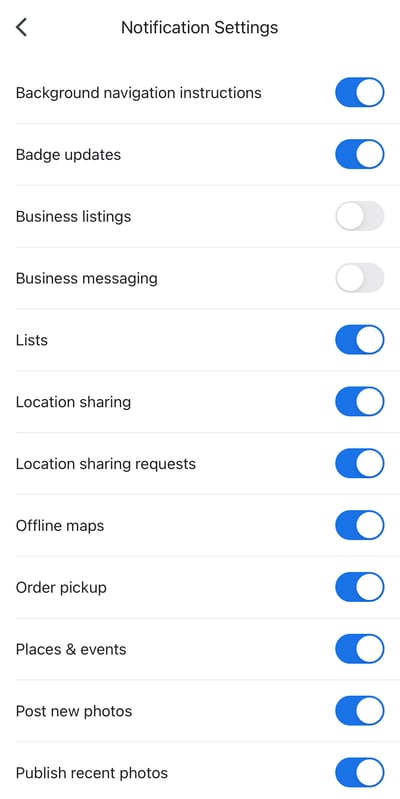 On the iPhone, you can turn off listing alerts in your Google Maps notification settings by disabling “Business listings” and “Business messages”

Following last week’s mention of the massive guide to Core Web Vitals (CWV) recently published on Search Engine Journal, we now have a more succinct post from Aoife Morgan on Search Engine Watch that offers four recommendations for improving your CWV scores. Morgan says the average website is performing below the CWV standard today. As a reminder, the standard measures Largest Contentful Paint (LCP), the loading time of the largest content block on the page; First Input Delay (FID), the speed at which a page responds to the user’s first attempt to interact with it; and Cumulative Layout Shift (CLS), the degree to which page layout shifts during page load.

Morgan recommends these four tactics: reduce the size of oversized images (preferably using tools that retain image quality while decreasing size); do not allow dynamic content and ads to cause layout shifts -- instead, control these elements using predefined sizing and position; remove as many plugins as possible, especially those you’re not actually using; revise your page code to make it as lightweight as possible, and remove any unused code.

Mike Boland, writing for Street Fight, offers a broader view of SnapChat’s local strategy than I’ve seen in a while. A couple of weeks ago I covered the launch of the new My Places feature within Snap Map, a tool that lets users mark their favorite local places and get automated recommendations. Boland places this feature in a larger context that shows SnapChat moving gradually toward deeper engagement with local businesses and local commerce. In particular, he notes that SnapChat’s Local Place Promote paid offering may become more popular with businesses if My Places leads to greater levels of SnapChat-driven foot traffic. Boland also calls our attention to Local Lenses, an augmented reality feature released last year that lets users interact with an AR-enhanced world via the phone’s camera lens. Local Lenses opens up further opportunities for SnapChat users to discover and even annotate local businesses. All of this suggests that businesses may see more reasons in the future to become active on the platform and try to attract the attention of its 280 million Gen Z users.

Google is rewriting title tags for some pages in SERPs

Many SEOs have been noticing that Google is now rewriting title tags for some websites when they appear in search results. In the past, Google has been known to make small modifications to the text in title tags, but this appears to be the first time the search engine has elected to rewrite the content entirely. The most likely source for new title tag content is H1 tags on the page, or in some cases anchor text from internal links. Observers have noticed that a date is sometimes appended to the title tag content. In some examples, title tag content is even being pulled from a different page on the website.

Of course, Google has been rewriting page meta descriptions in SERPs for some time now in order to better match the content of the query. With so many moves lately toward personalized search results, it’s not too surprising that Google would target title tags as well. However, it’s unknown at this point whether this is a test or a permanent change. The rewriting of title tags does not appear to have had a ranking impact.

This is interesting... I think someone posted about this earlier today:

Instead, it's displaying the anchor text from an internal link to the article. pic.twitter.com/CmQS4Lvgf9

Clarifying the relationship between Google review flagging and response

Our final item is a small but useful bit of intel from Phil Rozek, who informs us that Google reviews can still be successfully flagged for removal even if the business has responded to the review. The presence of a response, he explains, does not make a review legitimate in Google’s eyes, though he says it’s unknown whether it may make removal somewhat less likely. Still, for the most part the best strategy, if you think a suspicious review was posted by a competitor or a malicious user, is to respond to it carefully and flag it for removal. After all, flagging a review does not guarantee Google will take it down, and even if they do it often takes time. A simple non-inflammatory response -- stating, for instance, that your records do not show the reviewer as a customer -- can serve to mitigate the review’s impact while you await Google’s decision.