How Technology is Changing the 2016 Presidential Election

The 2016 presidential election has potentially been the most technologically advanced election in history. Presidential candidates who once relied on visiting towns and cities across the country in order to get in front of voters and form a positive impression can now reach hundreds of thousands of people with the tap of a button.  Similarly, voters now have smartphones and social media at their fingertips to sway their opinions and confirm candidate claims. With the 2016 election happening next week, here are four major ways technology has shifted the campaign process.

Social Media
Not only have social media channels such as Twitter, Facebook and Instagram changed the way that candidates engage with their constituents, but social media has increased candidate surveillance. Candidates who are not careful with their language may find parts of their speech taken out of context and plastered across social media for all to see. With the use of technology, Trump’s campaign created a geotargeted Snapchat filter for his constituents to use during the presidential debates. Regardless of the filter adoption rates, Trump’s opponent faced additional challenges due to the filter’s implications and Trump saw increased engagement due to the interactive nature of filters. 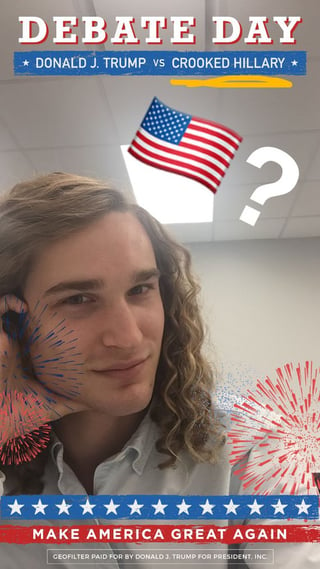 Part of Clinton’s strategy encorporated a Twitter campaign called #TrumpYourself, encouraging her constituents to find out what her opponent “really” thinks about them. Regardless of political preference, Clinton’s campaign had many users adopting filters with gusto due to its interactive and engaging nature.

In addition to their own targeted capmaigns, both candidates have been subjected to the public’s own filters. Each candidate has an entire team dedicated to digital operations. With over 100 people on the Democratic party’s digital team, and over 45% of the Republican party’s campaign budget going to digital efforts, these number are likely campaign highs for any presidential elections to date.

Fact Checking
The 2016 first presidential debate ranks as the most tweeted debate in history, with Twitter claiming the tweets exceeded 1.3M messages. With the demand for accurate data and the accessibility of real-time information, the 2016 elections have seen a jump in voter participation unrivaled in the past few elections. As with social media, the mobile-first mentality has put quick answers within real-time reach for voters. During the 2016 elections, “fact checking” websites have started popping up, helping voters make more informed decisions. Additionally, recent research discovered that 33% of pro-Trump traffic and 22% of pro-Clinton traffic on Twitter is being driven by bots. While they may be skewing the data on which candidate is really ahead in the election, these bots role in campaign strategy speaks to the importance of real-time engagement with one's audience.

Analytics & Insights
The rise of technology has given presidential candidates the ability to measure their campaigns like never before, with many brands beginning to participate in the election process, as well. 7-Eleven is one brand who targets voters who are passionate about their candidate with its #7Election Twitter campaign, providing Republican, Democrat and “Speak Up” coffee cups during the election season. The campaign has a corresponding website that acts as a poll, by showing which states have the majority vote based on the cups purchased. Through its party cups, 7-Eleven is encouraging voter participation and driving both online and in-store traffic. Other brands have followed suit with similar campaigns, taking advantage of the elections to drive online traffic into stores. With insights about how campaigns are performing, candidates and brands alike are able to make quick adjustments to their strategies with enough time to influence voters before the election.

Location Data
Finally, location data is what really pushes candidates to get out and vote on Election Day. Google has made it a priority to create a seamless process for helping voters find the correct polling location, and a big part of providing relevant information to voters comes from indexing locations based on complete and accurate location data. Studies have shown that polling locations can have a big impact on whether or not people choose to vote and how they vote when they arrive. Many voters may look for additional information, such as the availability of parking at their polling location, the most crowded times of day, open hours and what they need to bring to the polling station. Accurate location data, relevant categories and tools such a polling place locator can help drive more people into their nearest polling station and significantly increase voter turnout.

Having an interactive brand presence and being able to engage your audience is a key component of success, as shown by the 2016 presidential election. Not only is engaging your audience important for candidates, however, but also for brands hoping to drive online customers into their stores and ultimately convert them. Find out how your brand can best engage its audience with Brandify’s free whitepaper, The Engagement Stack.

Live from #BrandifyIt2016: Local in the Post-Digital World