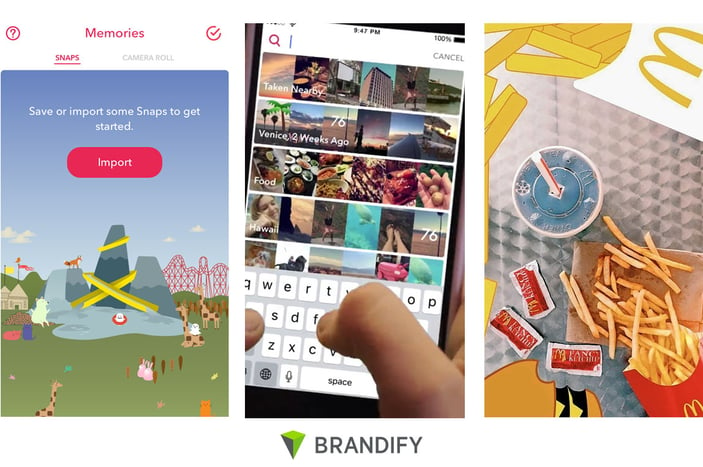 Location has always been a part of social media, but Snapchat is making local places a central feature of its platform in ways that other social sites have failed to do. With geofilters, live stories and custom on-demand filters, Snapchat is transforming the role of location within the social sphere.  And with Snapchat’s most recent ‘Memories’ update, Snapchat could be creating a revolution around the way that users integrate their immediate local experiences with their social sharing preferences.

Snapchat's 'Memories' Update
Yesterday, Snapchat announced that the it will be rolling out Memories over the next month or so. Until now, its growing user-base had a love-hate relationship with its fleeting five-second images and videos. The company has differentiated itself from the competition by creating real-time moments that are more authentic than its polished counterparts. There has even been stipulation that users are more willing to share raw, unpolished content through Snapchat because of the security that any records of such moments will disappear shortly afterward. With approximately 65% of all users in the U.S. ranging between the ages of 18 and 34, Snapchat is definitely a favorite among millennials.

With the new Memories update, however, users will be able to save Snaps and Stories to their camera roll, allowing for a more personal user experience. The Memories feature will give users the ability to edit old content and send it out again; users can even tell different Stories by piecing together previously published content and repurposing it with a new message. Another key feature of the Memories update is the “My Eyes Only” folder, which allows users to house sensitive images within a password-protected vault, which makes passing your phone around to share your content a much less awkward situation.

Snapchat's Location Concentration
Snapchat’s geofilters have become a trademark of the brand’s appeal. Geofilters have not only created buzz around location-specific content, but they have also succeeded in enticing users into creating content based on nearby locations so that they can use specific geofilters and thereby legitimize their local (or geographically significant) stops. Continuing the emphasis on location, the Memories update will allow users to update the original geofilters that were used on saved content and push out new geofilters when that content is repurposed. Dates and times will also update to the real-time moment of any repurposed content.

Snapchat recently made on-demand geofilters open to anyone, meaning that anyone can create (and market) their own specific geofilters through geofencing. Advertisers and brands, such as McDonald’s  and Coca-Cola, quickly began taking advantage of making their location and events the next “hot spots” with attractive and coveted geofilters. On-demand business geofilters allow companies to showcase store openings, product promotion and ad campaigns through unique geofilters that market their brand and create a more personalized customer experience.  For brick-and-mortar businesses, Snapchat’s focus on local is an increasingly valuable asset.

Snapchat's Messaging: Is it Conforming?
Having once differentiated itself through its transitory content, some have questioned whether Snapchat will continue to be a leading social sharing app now that it is closely competing with Twitter, Facebook and Instagram.  Reportedly, Facebook has seen a decline in original sharing as users are apprehensive about sharing their personal content next to the polished and ad-ready content that flows through the social giant today. Will Snapchat users hesitate to share raw Snaps and Stories when they know that other users can store that green, unfiltered content for later?

There’s no answer to this question yet, but one thing is certain: Snapchat understands the importance of user experience, and the many that could only save content through screen shots before, will now have a secure platform in which to store their content. Snapchat has always provided users with a very personal, collective and real-time experience. Those who love the app for these reasons will continue to share their moments and appreciate the chance to turn them into memories.  When Snapchat rejected Facebook’s $3B acquisition offer back in 2013 (an offer that would have been Facebook’s most expensive acquisition ever), it was a hint that the company had big plans for the future, and its Memories functionality is just the tip of the iceberg.

Brands can take advantage of Snapchat’s focus on local by creating opportunities to personalize the customer experience. Companies like Starbucks and Target don’t show signs of pulling back their Snapchat dollars any time soon. Marketers must take charge of their local-social presence and find ways to engage customers through pushing accurate location data and optimizing local listings for the likes of Social channels. Get visitors to your store through targeted social advertising and create brand ambassadors by rewarding loyal customers.

Learn how to individualize your brand experience and engage your customers on a more personal level with our free whitepaper, ‘The Engagement Stack.’

Webinar Replay: How to Re-energize Your Local-Social Strategy with Snapchat Geofilters