In this week’s update, learn about the growth of zero-click search; the risks of GMB messaging; a new helpfulness rating in reviews; the impact of COVID-19 on search and SEO; an address verification bug; and Google’s new hotel ads offering.

Zero-click grew to two thirds of search in 2020

Back in 2019, Rand Fishkin released an attention-grabbing report claiming that just over 50% of searches on Google ended without a click to a website. So-called zero-click search was attributed by Fishkin to Google’s ability to serve up answers directly in the SERP, making it unnecessary to visit a website for more information.

Now Fishkin has produced an updated study that finds 64.82% of searches from January to December 2020 ended without a click. (This does not include clicking on Google features, such as clicking to call a business in a local result.) The finding is based on data from SimilarWeb comprising over 5 trillion global Google searches. It’s important to note that mobile searches are much more likely to be zero-click (77.22%) as compared to desktop (46.48%).

Two days after Fishkin’s study appeared on March 22 and generated a lot of discussion on Twitter, Google’s Danny Sullivan posted a response calling Fishkin’s claims misleading, and pointing out that many people search for multiple terms before finding the result they’re looking for, find useful answers in search results making click-through unnecessary, or connect with local businesses after looking up information like hours of operation. Sullivan also pointed out that the traffic Google sends to other websites increases every year.

Joy Hawkins has a post on the LocalU blog suggesting that some businesses may want to think twice about enabling the messaging feature in GMB. Based on information provided by Sherry Bonelli, Hawkins notes users who message a business may be invited to connect with its nearby competitors. For some searches on mobile where the resulting business listing displays a “Request a Quote” button (a feature enabled by messaging for certain business categories), after the user sends the selected business a message, he or she is prompted to also connect with two or three other businesses offering the same services. Bonelli and Hawkins observed this behavior in a few categories including marketing, landscaping, and insurance, though only on mobile and not for every search. Still, the danger of losing out to a competitor may make some businesses reconsider whether to use messaging in GMB. 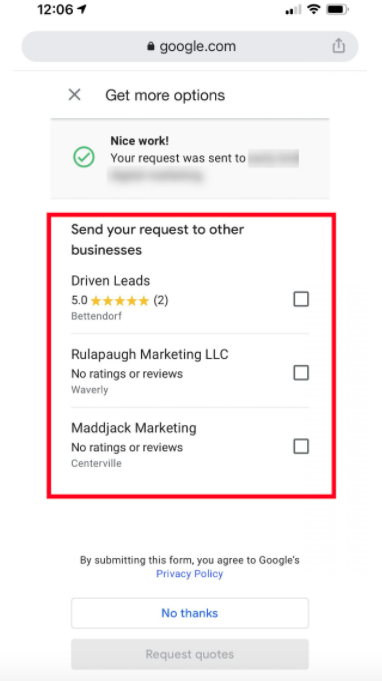 Tom Waddington has shared on Twitter a screenshot of a new Google feature that allows users to mark a review as helpful or not helpful by clicking one of two buttons, one with a thumbs up and the other with a thumbs down icon. Where present, this feature seems to replace the simpler thumbs up icon that appears beneath reviews, and shows a count of how many people have clicked in approval of a review. Presumably, this feature would also display a count of the number of thumbs-up or thumbs-down votes. I can’t replicate the feature myself, nor could a few others responding to Waddington on Twitter, so it may be merely an experiment as opposed to a new permanent feature. As usual with Google, only time will tell. 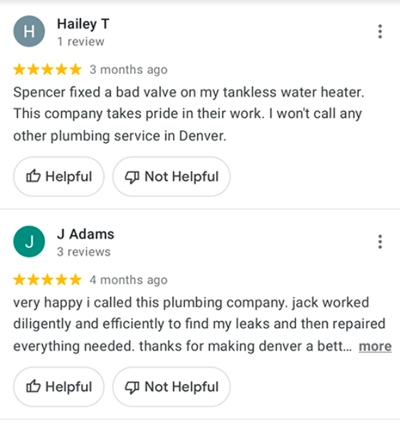 How COVID-19 has impacted search, including local

Kristopher Jones has an article on Search Engine Journal covering four areas whereby search was impacted by COVID-19. These include an increase in searches for pandemic-related topics or topics that staying at home has made more popular, such as hobbies, music, and fitness; an increase in local searches as consumers seek to support businesses impacted by the pandemic and search for needed products and services; an increase in online shopping, with 28% more consumers shopping online on a weekly basis than before the pandemic; and a renewed focus on evergreen content as users with more free time turn to the internet to conduct research of all kinds. Jones also notes that SEO itself is gaining in popularity amongst the general public, with more people recognizing the need to connect effectively with consumers and users of all kinds online.

A bug apparently made it difficult last week for businesses to update their addresses or complete address verification in Google My Business. The steps for verifying a new business include a section for filling out the address, and this section was missing, as reported on Twitter by Brendan Mangnitz and confirmed by Ben Fisher. Addresses were apparently not displaying in GMB for already-verified businesses as well. The bug was first reported on March 24 but as of March 25 it has reportedly been fixed.

Google has announced the broad rollout of a new ad type for hotels known as property promotion ads. These ads “show prominently in search results for geographic locations,” according to the announcement, and can be seen both in search and in Google Maps. Property promotion ads are different from booking ads in that they are shown to users who have not yet selected a hotel. The intent of these ads is to help hotels target users in searches where the hotel might not normally appear, and to make it possible for hotels to capture traffic around events or seasonal spikes or to drive awareness for new properties. Property promotion ads are a new ad group type within the Hotel Campaign section of Google Ads. Ads may be managed via the Google Ads interface or via API or bulk upload. 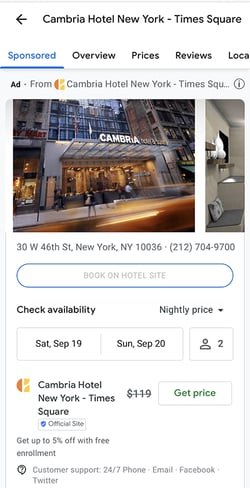