Yelp has unveiled several updates to its ad offerings, including custom location targeting and budget recommendations powered by machine learning. The custom targeting feature allows businesses to designate specific locations where they want their ads to appear; previously, ads could only appear within a specified radius around the business location. Custom locations can be indicated by zip code, city, or neighborhood. Budget recommendations are based on analysis of previous campaign performance, lookalike audiences, and other factors.

Yelp has also expanded the Yelp Connect tool, which previously allowed businesses to send updates to users who had chosen to follow that business. Now, businesses can use Yelp Connect to send messages to people who have searched for similar businesses or relevant business categories. Yelp has also updated its Yelp for Business mobile app and has published a new guide for businesses interested in marketing themselves on the platform. 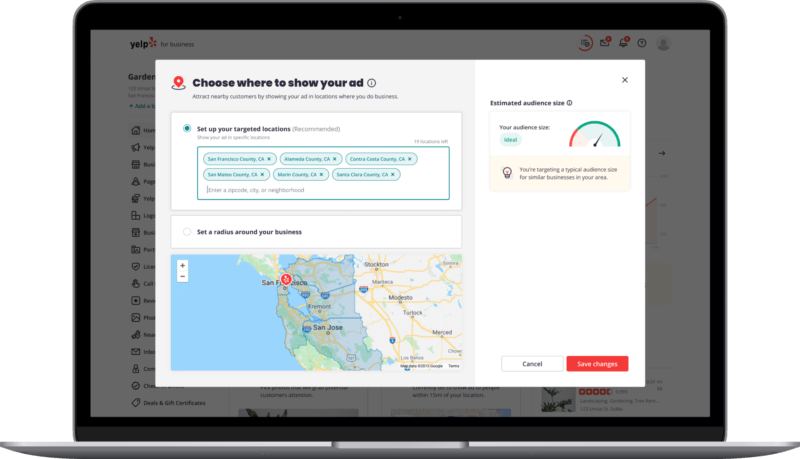 Google will apparently be adding more metrics soon to the new GMB Performance report, as evidenced by updates to GMB help documentation shared on Twitter by Stefan Somborac. In particular, the documentation lists driving directions requests and website clicks as metrics that are (or soon will be) a part of Performance. These familiar metrics from GMB Insights were conspicuously missing when Google first launched the Performance report screen, whose Interactions chart initially included just calls and messages and was recently updated to include bookings. Presumably, driving directions requests and website clicks will appear in the same chart.

The latest version of the Performance help documentation has a few other interesting nuggets. For instance, it explains that views in Performance may be lower than in Insights, due to the fact that Google is attempting to count views by unique users rather than all views. The documentation states, “A user can be counted a limited number of times if they visit your Business Profile on multiple devices and platforms such as desktop or mobile and Google Maps or Google Search. Per breakdown device and platform, a user can only be counted once a day. Multiple daily visits aren't counted.”

The documentation also has this to say about directions requests: “We changed how we tally unique direction requests to account for things like multi-tapping, direction request cancellation, and spam. We expect the new direction requests metric to more accurately represent the number of times individual customers request directions to your business. We are still experimenting with the new version of the metric, so the old one is still available on the GMB Insights page.”

Neither of these new Performance metrics appears to be live yet.

How to unfilter missing Google reviews

Jason Brown reports on the LocalU blog that a lot of users are complaining in recent days about Google over-aggressively removing reviews from publication. Brown notes that Google can sometimes remove reviews that contain email addresses, URLs, pound or dollar signs, and certain other icons and special characters. But the recent removals have been for reviews that didn’t seem to exhibit any of these characteristics. After running several tests, Brown has discovered a workaround for users who can’t get their reviews to publish, which involves posting a star rating only and then going back and editing the review to add text. For the time being, this seems to work as a method for getting filtered reviews to publish as expected.

This year’s virtual Google I/O event starts tomorrow and runs through Thursday, with several SEO-oriented presentations on the agenda, such as:

There are several other sessions of interest to SEOs, as well as sessions on AI, machine learning, AR, app development, and a wide variety of Google products. Sessions will be broadcast at specific times as indicated in the full schedule, but there will also be session replays and the ability to view content on demand.

Why most business reviews now come from Google

Mike Blumenthal has a new piece arguing that Google now “owns the local review economy” and suggesting some of the reasons this has come to be. Blumenthal studied reviews for a 200-location restaurant chain over the course of several years, finding that from 2013 to 2015, the dominant restaurant review sites were Yelp and TripAdvisor, with Google’s review volume lagging far behind. In the days of Google+, it was harder to leave reviews for a local business, but in the time since, Google has made the process far easier and has, of course, launched the successful Local Guides program as well as tools that encourage businesses to ask for reviews. Google reviews grew significantly year-over-year from 2016 to 2018; in Blumenthal’s study, Google overtook all other platforms for the first time in 2017. From 2018 to 2020, a surprising 89% of the restaurant chain’s reviews came from Google, as compared to Yelp, TripAdvisor, Facebook, and Zomato. 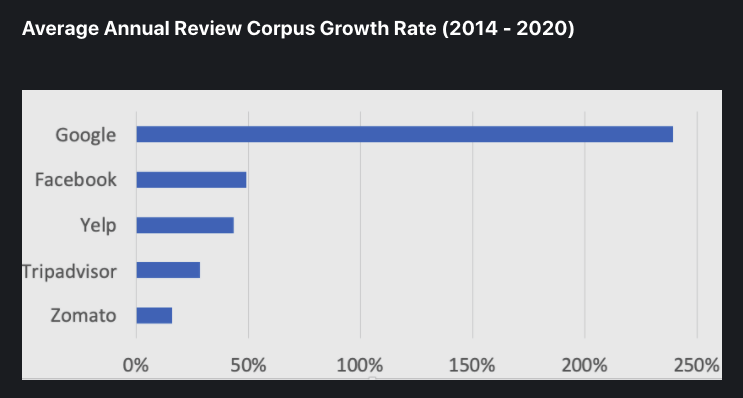 Google Maps on Android has recently added a prompt, directly in the default search box, to “Search for COVID-19 vaccines.” This feature has not yet appeared on Maps for iOS; on the web, users may see a similar banner underneath the main search box. This new prompt appears in addition to “COVID-19 info & vaccine locations” in the Explore tab and the “COVID-19 info” map overlay in Google Maps. In search, of course, Google has launched multiple features during the course of the pandemic to customize search result pages related to COVID-19 information as well as testing and vaccination availability. 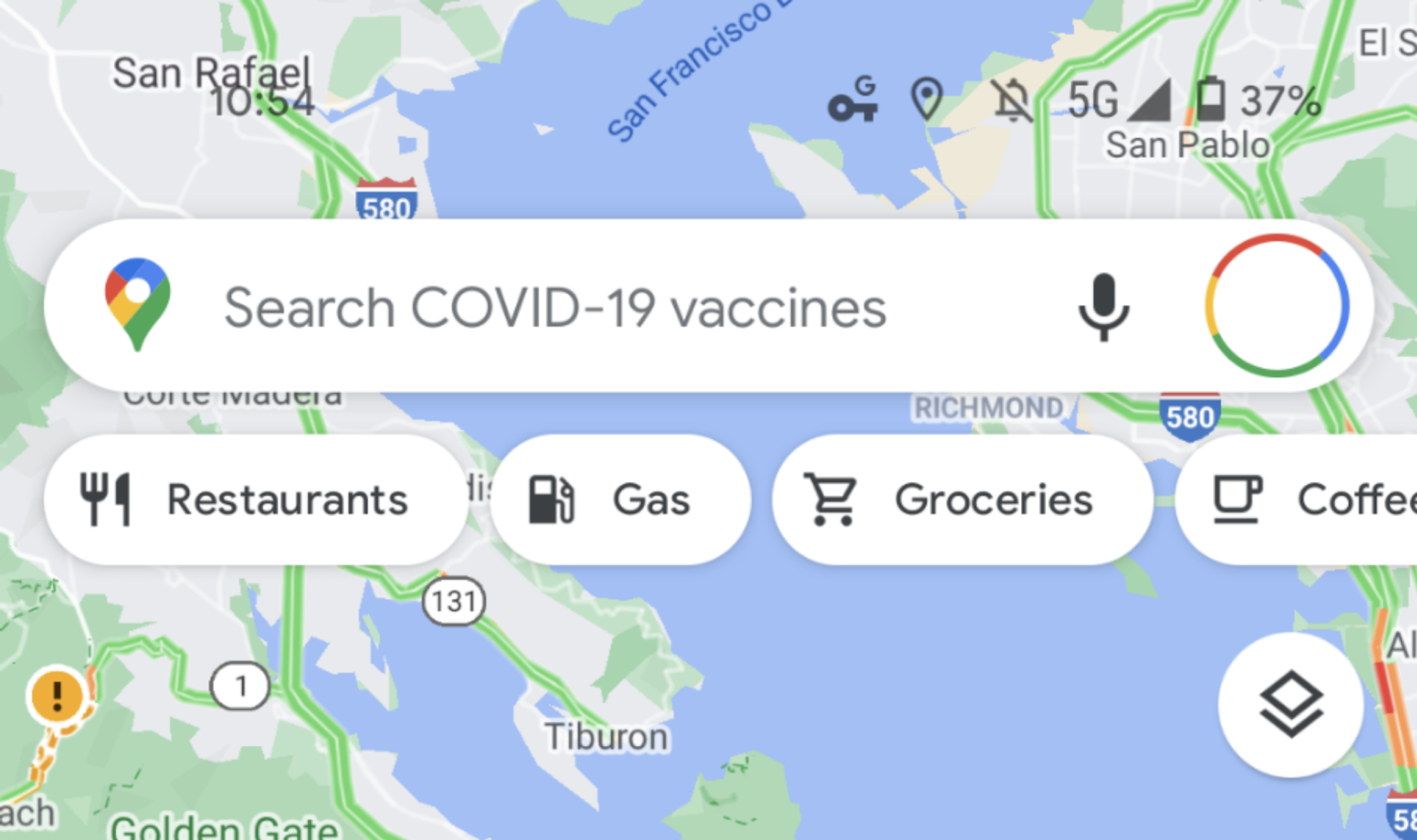