In this week’s update, learn about Yelp’s report on economic recovery; Instagram’s claim that it is “no longer a photo sharing app”; Google’s July 2021 Core Update; how to respond to Yelp reviews; the hyperlocal potential of Nextdoor; and a guide to branded search optimization.

Yelp has released a study comparing March to May 2021 to the same period in 2019, in order to gauge the degree to which the U.S. economy has returned to pre-pandemic levels. The study finds that, based on levels of consumer interest in businesses -- judged by activities such as posting photos and reviews --  the economy is approaching a complete recovery.

Restaurants are at 86% of 2019 levels of activity, according to the study, with food businesses overall at 91%. Home and local services are even closer to full recovery at 99% of 2019 levels. The strong housing market has caused real estate to exceed 2019 at 104%. Shopping is at 92% overall, and automotive services, like real estate, are exceeding pre-pandemic levels of interest at 106%. Some of the biggest winners in the automotive space are recreational vehicle dealers at 125% and motorcycle dealers as 126% of 2019 activity.

We don’t talk about Instagram much in this space, but when a powerful social network makes moves in a new direction, the repercussions may be worth our attention. In this case, the story centers around a bold statement from head of Instagram Adam Mosseri, who said in a recent video that the platform is “no longer a photo sharing app.” Instead, Mosseri outlined four focal areas that are of primary interest to the future of the platform: content creators, video, shopping, and messaging. Video is one of the primary drivers behind Mosseri’s claim that Instagram is not just about photos. With a surge in interest around video and strong competition from TikTok and YouTube, Instagram is looking to expand into “full screen, immersive, entertaining, mobile-first video,” according to Mosseri. The aspect of Instagram’s development that may be of particular interest to brands is the expansion of shopping capabilities. Like Pinterest, Instagram has already made moves to enable product purchases on the platform, and the Shop tab on the app gives consumers access to products from a variety of sources. But it’s a relatively underdeveloped feature set with no particular emphasis on things like local availability, so there’s plenty of room for Instagram to improve the shopping experience and create a more compelling set of opportunities for brand marketers.

Google is rolling out the July 2021 Core Update

Google announced on July 1 that the July 2021 Core Update had begun rolling out, projecting the full rollout would take one to two weeks to complete. The July update represents the latest in an especially active period of algorithm changes on Google’s part, including the product reviews update in April, the June Core Update, the Page Experience update starting on June 15th and rolling out through August, and a two-part update designed to fight spam which rolled out on June 23rd and 28th. The July update was announced back in June as an intended part of the June Core Update that was not completed in time. Google may be playing catchup in releasing so many updates in a short period, given that about six months passed between the latest round of updates and the last Core Update in December 2020, which itself was a full seven months behind the previous Core Update in May.

How to respond to positive and negative Yelp reviews

Tom McLaughlin has a long post on Search Engine Journal offering tips for responding well to positive and negative reviews on Yelp. He reminds us that how a business responds to reviews, both good and bad, can have as much impact as the reviews themselves on the opinions of others. Responding to reviews shows that you care about your customers and gives you a chance to encourage repeat business. Negative reviews can be an important signal alerting you to what you need to improve.

McLaughlin encourages businesses to respond to both positive and negative reviews. For positive reviews, he suggests that you keep the response short and to the point, but relevant and unique. In addition, you should offer more value -- such as suggesting that the reviewer try one of your other offerings -- and conclude with an invitation to visit the business again.

For negative reviews, the key is to respond quickly with a personalized message that thanks the reviewer for their feedback and details the actions you’ve taken to prevent the problem from recurring. Maintain a positive and polite tone, and be sure to track the trends in your negative reviews so you can spot the need for improvements in your business operations. There’s a lot more detail in the article itself, so I encourage readers to check it out.

Greg Sterling has some commentary on Nextdoor based on a recent Axios piece, which notes that the neighborhood social app has gained significantly in usage and engagement during the pandemic. Sterling suggests that Nextdoor has the potential to become “a more ethical version of Facebook” as it approaches an IPO, possibly also creating a lot more value for businesses who want to engage with consumers at a hyperlocal level. According to the Axios article, one in three U.S. households is now active on Nextdoor, up significantly from one in five just one year ago. Daily active users have increased by 50% year over year as Nextdoor became a critical hub for COVID-related local information. In response, the platform is adding new features and developing its model of community engagement, including, according to Axios, “expanding the number of neighborhoods a user can belong to and encouraging participation from local businesses, schools, nonprofits and government agencies.” 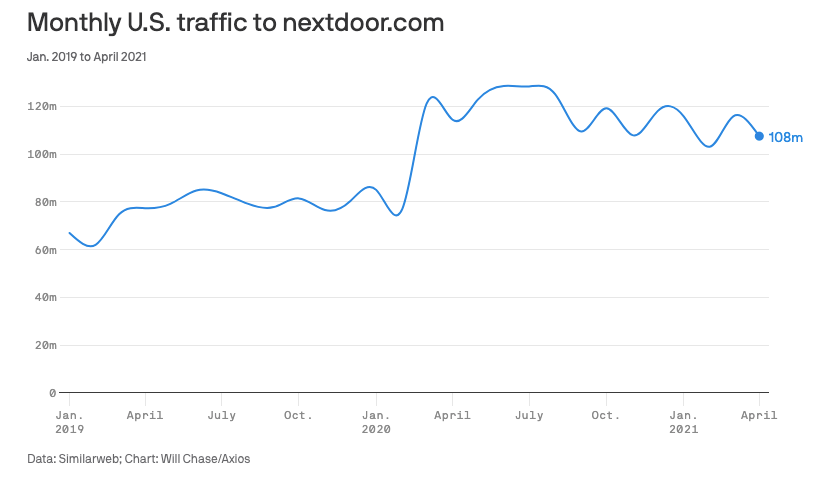 A guide to optimization for branded search

Ann Smarty has a new guide to branded search optimization on the Moz blog. She says that many marketers ignore branded search queries, but they shouldn’t, because people who search for a brand are high-intent searchers and can be useful in revealing sentiment around your brand as well as your competitors. Google suggestions (the ones that autopopulate when you start typing a search keyword) are an important source of information about popular queries that use your brand by name. You can’t control what appears in these suggestions, but you can learn what queries are driving the most traffic to your site or to sites that mention your brand.

Smarty recommends an SEO approach that makes use of keyword research tools, ranking tools, and Google sources like “People Also Ask” to gain a broad understanding of the topics and questions that matter most to those searching for your brand, followed by various site optimization tactics -- new pages, blog posts, FAQ content, additions to your Knowledge Base, and more -- that together can pull traffic toward your site for the most important of these queries. In many ways, her suggestions are similar to those you’d employ in any search optimization campaign, but it’s worth remembering that branded search is, for many SEOs, among the most important query categories to do well in and perhaps one of the most neglected.