Happy New Year! In this week’s update, what to do if Google gets your listing info wrong; the value of Google Maps followers; new service features in local results; the definition of GMB categories; an antitrust action targeting AMP; and a boost in holiday sales according to MasterCard.

What to do if Google gets your listing info wrong

Phil Rozek has published a helpful blog post about a frustrating issue: the modification, on Google’s part, of information in your GMB listing without your permission. As Rozek notes, this problem got noticeably worse in 2020, as Google rolled out several new features in the wake of the pandemic, as circumstances on the ground changed quickly, and as Google increased its reliance on third party sources of information as well as Google users and its own internal teams.

As a result, many business owners have found their hours, attributes, secondary URLs, and other details modified to values that are incorrect or inconsistent with how the business wants to be listed. Rozek says this is often a difficult problem to solve, and notes that Google has not offered much in the way of direct support.

He does, however, provide one suggestion that makes a lot of sense: ensure that the landing page linked to your GMB listing contains information that exactly mirrors what is in the listing itself. Google, after all, uses web crawling as a primary reference for confirming the information in GMB profiles. So for instance, if Google is changing your service offerings, be sure to list all of them on your landing page in precisely the same language as they are listed in GMB, preferably with a link to a page that describes that service in more detail. In addition, Rozek suggests that cleaning up secondary citations to ensure they list data points like business name consistently with GMB can be helpful.

The value of followers in GMB

Barry Schwartz recently asked for input from several local SEOs as to the value of the “follow this business” feature in GMB. Introduced in 2018, the feature allows Google Maps users to follow a business and receive updates. For the most part, those offering opinions concurred that followers have offered little to no value, with Ben Fisher summing things up by calling followers a “severely underused feature [that] has limited visibility and is a waste of time.”

However, Claire Carlile noted that she has used the new follower offer post for at least one client and was able to attribute new revenue directly to the offer. She also noted that follower posts may not be suitable for all business types. It seems likely that, if followers are to gain any traction, it will happen for business types most suited to gathering a loyal following in real life.

Despite local SEOs’ skepticism about followers, Google continues to build out social features within Google Maps, including the new Community Feed announced last month. Perhaps, as Fisher notes, it’s the lack of visibility for followers and business updates that is the real problem.

Colan Nielsen has a report showing evidence that Google has begun surfacing service attributes in local results, where the search keyword matches the attribute. For instance, a lawn care business that lists “Weed control” as an available service will see the phrase “Provides: Weed control” along with a blue check, at the bottom of the local pack content for that listing.

Nielsen says that internally at Google, these snippets offering confirmation that a business offers a searched-for product or service are called “justifications.” First appearing in 2019, justifications already include content from Google Posts, reviews, and the business website.

Though service attributes are not considered to be a ranking factor, their placement alongside other justifications as a part of the search result could cause increased CTR, Nielsen notes -- reinforcing the notion that businesses should make use of all available GMB features. 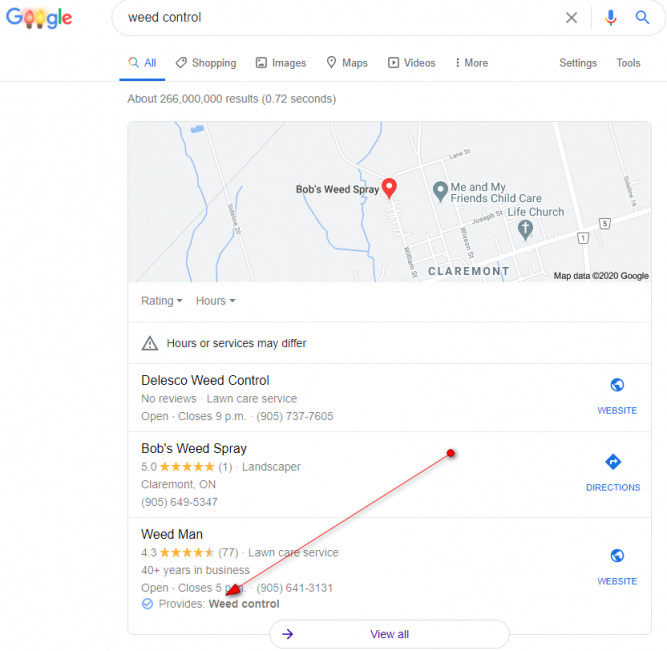 In response to a question on the Local Search Forum from user ryannbull, both Phil Rozek and Joy Hawkins confirmed that Google offers no standard definition for the categories listed in GMB. In the original post, ryannbull writes, “For context, one of our clients provides heating and cooling services and there are a number of different HVAC categories one can choose. Is there a place to see what category would be the best fit based on the services our client provides?”

Rozek acknowledges that GMB categories can be ambiguous, and suggests that sometimes the best course of action is to check competitor listings and make sure you are consistent with them. Hawkins pointed to a spreadsheet that in fact contains an older set of category definitions maintained by Google back in the MapMaker days, with the caveat that many changes have occurred to Google’s category set since the definitions were updated. “However,” she writes, reiterating Rozek’s advice, “I wouldn't choose categories based on that list. I'd look to see what categories people are using for the keywords you want to rank for.”

Google now faces three separate antitrust actions in the U.S. The first was brought by the Department of Justice in October, and accused Google of unfairly dominating search on smartphones, among other monopolistic practices. Now, two more suits led by various groupings of state attorneys general are alleging that Google has monopolized online search and search advertising.

One of these suits, led by Texas Attorney General Ken Paxton, alleges that Google’s Accelerated Mobile Page (AMP) project is designed to create unfair competition with publishers. Because AMP pages do not work well with JavaScript, publishers were forced, according to the suit, to abandon their own JavaScript-based ad exchanges in order to accommodate the AMP standard, thereby forcing advertisers over to Google’s ad exchange.

This is one more example of a multi-pronged attack against the search giant, in this case potentially resulting in restriction of specific practices related to search and advertising.

Holiday sales up 3%, according to MasterCard

According to preliminary reports from MasterCard, overall U.S. retail spending for the extended holiday period from October 11 to December 24 is up 3% over last year, with online sales growing 49% over 2019. Online spending accounted for 19.7% of overall retail sales, up from about 13.4% in 2019. In this unusual holiday season, consumers spent more on home furniture and furnishings than usual; this category saw the biggest growth at 16.2% over last year. Home improvement was up 14.1%, and electronics and appliances were up 6.0%. Apparel declined 19.1% compared to last year, and luxury categories were down 21.1%.

Black Friday spending was down by 16.1% compared to last year, but it remained the top spending day of the holiday season. Generally, consumers shopped far earlier this year than normal, encouraged by incentives from retailers. There were fewer last-minute shoppers in 2020 than in 2019.