In this week’s update, learn about the rollout of ratings, photos, and COVID-19 safety info in Apple Maps; a new verification prompt in Apple Maps Connect; COVID-19 severity in Google Maps; landmarks in Google Maps Live View; and the global launch of free Google Shopping.

Users can try out ratings and photos in Apple Maps

I reported last week that the new Apple Maps ratings and user photos features were supposedly being piloted in Australia. Now a user named StijnJB_ has posted in r/applemaps on Reddit that he or she was able to rate Australian businesses on Apple Maps despite never having visited Australia. I decided to try it myself, and lo and behold, it works. Here are my screenshots of a listing for a cafe in Sydney, the same listing StijnJB_ posted about on Reddit.

Ratings and photos in Apple Maps for Flour Drum, a cafe in Sydney, Australia

As you can see from the screenshots, qualifying businesses display a new “Rate and Add Photos” prompt just below the third-party reviews section. Tapping the prompt for the first time brings up a screen that asks the user to opt in not only to “improve the map” by sharing ratings and photos, but also to allow Siri to suggest contributions you might make, based on your location history and photo library. The terms also state that ratings and photos are tied to the user’s Apple ID, and that “your approximate location will be sent to Apple and used to confirm authenticity.”

Not wanting to add spam to the listing, I didn’t submit a contribution, but it appears I could have, so perhaps the confirmation-of-authenticity step occurs after the fact. After tapping on the Add Photo icon, I was prompted to take a new photo or share up to five photos from my photo library.

StijnJB_’s post suggests that even within Australia, ratings and photos are only available for some locations, such as restaurants, retail stores, and parks. It’s worth noting that, at least for now, Apple ratings have not displaced third-party review content.

Taking a cue from Yelp, TripAdvisor, Bing, Google, and others, Apple Maps has added a COVID-19 message field to Apple Maps. The news comes to us directly from Apple. The new field is limited to 200 characters and must only be used to provide messages related to COVID-19. Apple suggests that the message could communicate cleaning protocols, store capacity, security measures, mask requirements, and other measures. An optional URL can be added to provide more information.

Update: It was pointed out to me that this feature has been in place for some time. It was news to me though (given that I don't interact as much with SMBs) and perhaps it will be news to others as well.

Apple has begun prompting users of the Apple Maps Connect platform to verify their contact information by receiving an automated phone call from Apple with a pin code the user must enter in their Apple Maps Connect account to complete verification. It’s unclear whether failing to verify the business phone number has any impact on the status of the business listing. But the move certainly echoes similar verification processes that have been in place for years at Google and other sites, offering an additional signal that Apple is making moves to engage with local businesses. 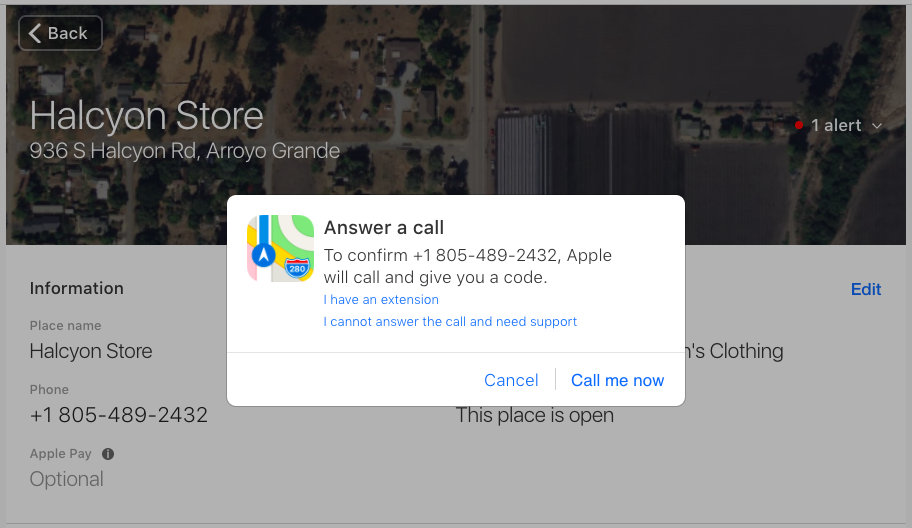 Also last week, I reported that Google Maps was rolling out an update to indicate COVID-19 severity in different geographic regions using color-coding. Shortly after posting, a colleague shared that she was able to see the update on her Pixel phone, and now I can reproduce the same thing on my iPhone. To enable the feature, tap the layers icon on the top right of the map, and select “COVID-19 info,” a new option that now sits alongside “Transit,” “Traffic,” “Biking” and other map overlays. Once “COVID-19 info” is enabled, you’re prompted to zoom out until the map covers enough geographical territory to display COVID-19 data. For me, the county level offered the most granular data available; zooming out further rolls up the data to state and country levels.

A popup indicates that the numbers represent a rolling seven-day average of cases per 100,000 people and are sourced from Wikipedia, The New York Times, Johns Hopkins, and Brihanmumbai Municipal Corporation. Regions with smaller case counts are shown in light yellow, with shading becoming darker and more pink as case counts increase.

Live View in Google Maps is a feature, launched in August of last year, that uses augmented reality to provide directions to users as overlays on a live view of their surrounding area. A new report on 9to5Google covers several updated features in Live View, including the addition of landmarks. Landmarks are iconic locations in a city, such as the Empire State Building, as well as easily recognizable places like local parks. Live View will now use information about nearby landmarks to help orient users as they navigate to their destination. Landmarks is launching initially in several cities around the world, including New York, Los Angeles, and San Francisco.

In addition to the landmarks update, a Live View prompt will now appear in more places in Maps, such as when users are in a transit station, perhaps having just exited a train and not knowing which way to go. Live View Location Sharing, another new feature, lets users share location so that one person can navigate to the location of another. Finally, Live View has improved its localization technology to account for elevation, meaning that map pins will be placed more precisely.

Landmarks in Live View and a Live View prompt in transportation navigation, courtesy 9to5 Google

Google Shopping will be free worldwide by mid-October

In April, Google announced that U.S. merchants could now list their products for free in Google Shopping. At the time, the company announced that free listings would be rolled out globally by the end of the year. Last week, Google confirmed that the free version of Google Shopping will be available worldwide by mid-October. Free product listings are eligible to appear in the U.S. in both the Shopping tab and in Search; it looks as though the global rollout is isolated to the Shopping tab only. In an email sent to some users, Google indicates that the Shopping tab will also be redesigned “to enable separate paid and unpaid experiences, with an ads carousel across the top, and unpaid experiences listed beneath.” Users in the U.K. are already reporting that the new Shopping results are showing live.