In this week’s update, learn about a new antitrust action against Google; the local impact of the June and July Core Updates; a new callout in GMB of Q&A content; identifying messages linked to Google posts; the link between events and GMB profiles; and a study examining the common traits of spam listings.

The U.S. Attorney General, joined by 36 states, has filed a lawsuit claiming that Google Play charges exorbitant fees and unfairly controls the app market on Android phones. The suit alleges that, by acting as the sole means of app distribution for Android, Google Play constitutes an illegal monopoly, and in addition that Google acted to force Samsung out of the market when the company attempted to launch a competitive offering. Greg Sterling, writing about the suit in Near Media, notes that comScore has just released a Facebook-sponsored study that points out just how dominant Google’s own properties are within the Google Play marketplace, and how similar the situation is for Apple products on iPhones. Whether or not the suit is successful, it represents an additional viewpoint in the growing list of antitrust actions against Google and other big tech companies.

Top apps on iOS and Android, courtesy The Verge / Near Media

The local impact of the June and July Core Updates

Joy Hawkins has a new post examining the positive impact of Google’s June and July Core Updates on the local search performance of a personal injury attorney who is a Sterling Sky client. This client saw gains in June and again in July for high-intent keywords containing the name of the city where the attorney practices, impacting both the business website and the performance of the attorney’s GMB listing in local pack results. In fact, Hawkins writes, “The majority of the traffic increases from the July core update are coming from their Google My Business listing for their main office.” This is interesting because most of the recent work done on behalf of the client relates to onsite SEO improvements, such as cleaning up poor performing blog posts, optimizing older pages, and building quality links; and because of the oft-repeated maxim in SEO that Google’s core search algorithm and its local algorithm are managed separately. However, the key to improvement in this case probably relates to the importance of the business website as a GMB ranking factor, leading to indirect improvements in local pack performance and, as a consequence, increased website clicks.

Brandify’s own Mike Snow reached out the other day with the observation that listings in the Google local finder (what you see when you click through to view more local pack results) have begun, in some cases, displaying a new section with the heading “Related to your search” that offers content from the listings Q&A section with keywords matching the user’s query. 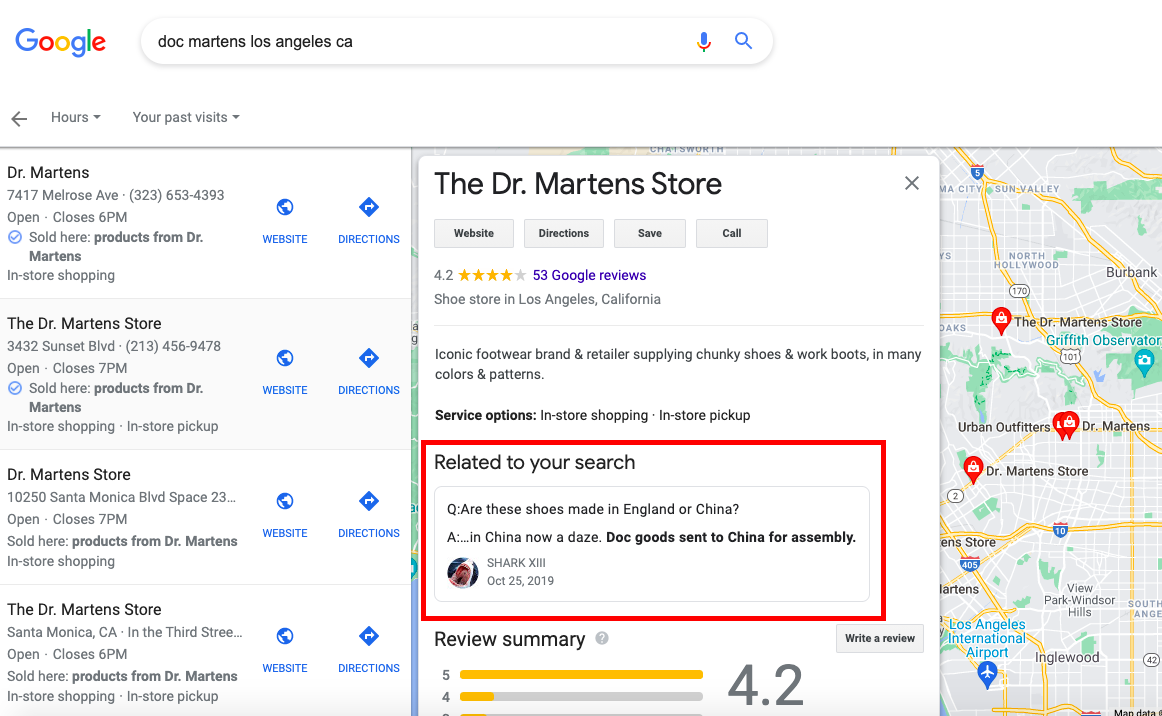 Example listing with “Related to your search” section

It turns out this is not quite brand new; Barry Schwartz posted on June 28 that a similar phenomenon had been captured in mobile results and shared on Twitter by Allie Margeson. One user, responding to Margeson’s Twitter post, shared a desktop example. Apparently, this feature is not yet visible to all users, though I was able to reproduce John’s example easily. More importantly, as the example illustrates, Q&A content provided by Google users is not always going to showcase your business in the best light. If it becomes widespread, this new feature will greatly underline the importance of stepping in as the business to provide authoritative, accurate, and on-brand Q&A content, whether in response to user questions or in the form of standard FAQ. And if you do go the FAQ route, you’ll want to be sure to focus on questions that relate to your most popular and important keywords.

GMB now identifies when messages are linked to posts

Last fall, Google began placing the Message icon into Google posts when businesses had the messaging feature enabled. The icon represented a kind of free additional prompt for users viewing post content to be able to easily start a chat session with the business. Now, as noted on Twitter by Ben Fisher, Google is notifying businesses when message sessions originate from a post. The notification appears at the start of the message thread and reads, “Customer message about your Google post,” as shown in the screenshot, which shows the email businesses receive when a new message comes in. The notice does not indicate which post was the source of the message, but does give businesses some additional awareness of the source, potentially helping business owners gauge the effectiveness of post campaigns. 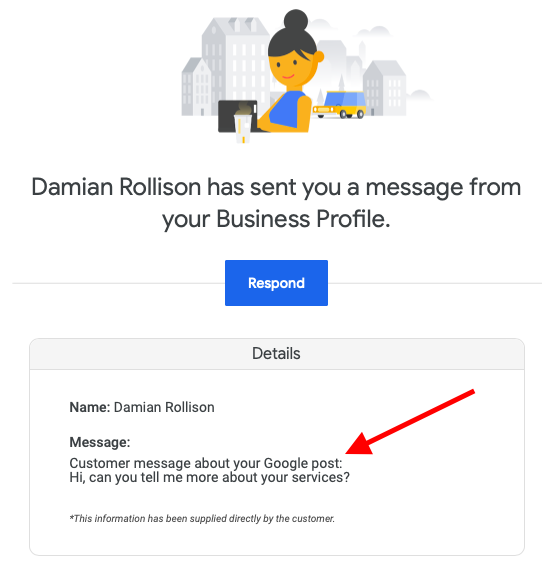 My own test, showing Google’s post notification language in an email alert

How events relate to Google My Business

Another post from the always-prolific Joy Hawkins helps to explain how event content sometimes makes its way into Google My Business profiles. Event content, as displayed in the screenshot, can sometimes show up in Knowledge Panels but does not appear in Google Maps. For the most part, this is content that Google scrapes from a website and appends to the Knowledge Panel, outside of the business’s control. The website that acts as a source for event information isn’t necessarily the one linked to your GMB profile, so incorrect and even malicious content can sometimes appear, though GMB support will take it down by request.

Hawkins also points out that, in certain cases, events themselves can qualify for a GMB listing. Typically, these are events that occur regularly (for instance, every year) at the same location -- she mentions the Toronto Auto Show as an example.

Events in the Knowledge Panel for a business, courtesy Sterling Sky

The agency Restoration Rocket, which specializes in SEO for the restoration industry, has a new study that examines thousands of spam listings in that industry to find common trends and identify ways to combat spammers more effectively. The study looked at up to 10 pages of search results across 34 geographical markets, and found 250 probable fake listings, 201 of which were removed after reporting them to Google.

Of these 201 listings, 98% had a business name that either exactly or partially matched the search queries used to find them -- for example “Mold Remediation Fort Lauderdale.” Spam listings had an average of 6 reviews, and 35% had a five-star rating. The average fake listing claimed to have been in business for 3 years, and 54% listed a website whose domain, like so many of the spam business names, matched the keywords used to search for them. Every market the study looked at had at least one spam listing. As the authors point out, one can extrapolate from this single industry to conclude that spam is very widespread, but that more often than not, Google will take action to remove it once it has been identified.