This week, read about TripAdvisor’s acquisition of SinglePlatform; Google’s explanation of the November ranking update; a new “Lighting” layer in Google Maps; tags in Google reviews; retailers struggling to find holiday workers; and new support for appliances in Google Assistant.

TripAdvisor, one of the most popular sites for hotel and restaurant search internationally, has acquired SinglePlatform, a company known for its specialization in restaurant menu syndication. SinglePlatform had already been supplying TripAdvisor with menu content for restaurant listings. TripAdvisor, which a few months ago launched a new restaurant ads platform, is clearly pushing to expand its capabilities in the restaurant space. The company will now be able to offer through SinglePlatform a service that allows restaurants to manage menus in one place and have them synchronized to multiple third-party sites, including restaurant sites like Open Table and Zomato. 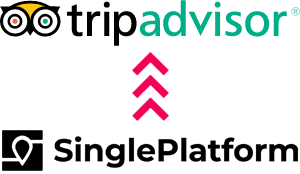 Google has confirmed that the rankings shakeup beginning in early November, widely noted by local SEOs and informally called the Bedlam update, was in fact an intentional change with an official name: the November 2019 Local Search Update. The update implements a technique called neural matching, which is new to local search but something Google has already been using since 2018 in organic search. 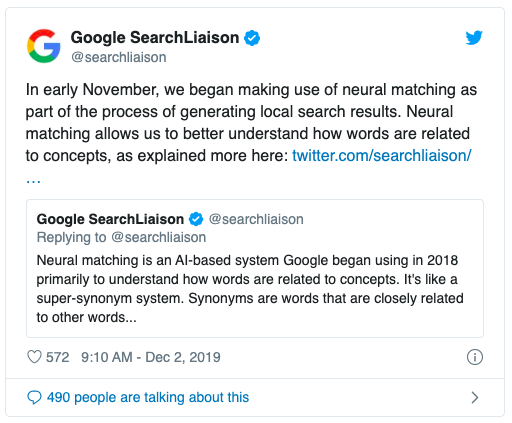 Google made the change in recognition of the fact that people often search using words and phrases that are different from the language in search results. The company’s search liaison, Danny Sullivan, suggests we think of neural matching as a kind of “super-synonym system” that can provide relevant results no matter whether the words in the query match the words in the result. In practice, it appears that local results are now showing up based on new criteria like secondary categories and website content, in addition to traditional ranking signals such as business name and primary category.

Google appears to be launching a new “Lighting” layer in Google Maps for Android that helps to identify brightly lit streets, so that those who rely on the app for walking directions at night will be able to choose a well-lit route and avoid darker areas. The feature was detected by XDA Developers in the code of the new beta version of Google Maps, and is not live yet. The code suggests that the interface will display yellow lines indicating routes with better lighting. No word yet on how Google is sourcing the data for this potentially useful feature.

Google seems to be rolling out tags in reviews

Some users are seeing new tags in Google reviews indicating traits like Quality, Value, Responsiveness, and Punctuality. The reviewer can click on a tag and indicate whether he or she rates the business positively or negatively according to these traits. In the published review, Google will then display a heading like: “Rated highly for: Responsiveness, Quality.” This enhancement doesn’t go as far as the experimental hotel reviews I wrote about last week, but taken together, such experimental changes suggest that Google is looking to make the process of reviewing a business more engaging -- and trying to get reviewers to speak to specific traits in an effort to source more data they believe will be useful for consumers.

Low unemployment and the holiday crunch are creating a challenge for retailers. According to a recent CNN report, seasonal hiring in retail stores is expected to be down 30% this year in comparison to 2013, but this isn’t because of a lack of demand. Instead, retail stores are finding that there aren’t enough employees available to take on seasonal jobs. To lure more workers, some retailers are offering signing bonuses, boosting hourly rates, and providing additional incentives usually reserved for full-time employees, such as employee discounts.

Google Assistant can now be integrated in more household items

9to5Google has noticed that the developer documentation for Google Assistant was recently been updated -- perhaps in anticipation of new product demonstrations at the Consumer Electronics Show in January -- to include support for several new household items. The list includes smart beds, closets, drawers, blenders, cooktops, dehydrators, fryers, grills, pet feeders, pressure cookers, yogurt makers, and more. It sounds like we can anticipate a future where we’ll be talking to all of our household appliances on a regular basis.