In this week's Monday Memo, read about the value of local citations; new answer content in Google Q&A; Google's new "Request a Quote" button; new tabs and carousels in the local pack; why experts should write specialist content; and popular uses of voice search according to a new study.

The value of local citations

An article on Street Fight last week from David Mihm and Mike Blumenthal, "The History and Value of Citations, or Citations are Dead, Long Live the Citation," has generated a fair amount of attention and controversy in the local search industry.

In the piece, Mihm and Blumenthal reference a presentation from Darren Shaw at MozCon, which Shaw has also recapped on the Whitespark blog. For Mihm and Blumenthal, a key takeaway from the presentation is that citation building on its own now has little impact on ranking; the two noted with some surprise that, in Mihm’s words, “a lot of the information (still) circulating around the local search world is stuff that you and I wrote 6-8 years ago” that is no longer relevant.

It’s worth noting that if you read Shaw’s blog post, you’ll see that he does not write off citation building entirely, but rather emphasizes the notion (from his own 2018 Local Search Ranking Factors report) that citation signals have become a foundational rather than a competitive factor in ranking and have diminished in importance from the days when businesses could rank with citations alone.

The growth in market share of Google as a local property is, of course, the main reason for this shift. Where sites like Mapquest and Citysearch once commanded a significant share of consumer traffic, now Google is the main game in town. But as Mihm and Blumenthal also acknowledge, many other sites and apps do still matter quite a lot, including Yelp, Facebook, Apple Maps, and Foursquare. Part of the issue, indeed, with looking at local from a ranking-centric point of view is that one tends to overlook significant channels of consumer activity that have little to do with Google -- the obvious example being Apple Maps.

I expect this debate will develop further and will help us as an industry to properly calibrate the emphasis we place on various local tactics.

Earlier this year, Google first tested and then officially rolled out a feature whereby unanswered questions in the Q&A section of Google My Business were sometimes answered automatically with content mined from reviews. Now, Google has added Posts and the still-in-beta Products page to the list of sources it consults for possible answers. The news suggests that Google recognizes not all businesses are paying attention to the questions asked by consumers, and is trying to create a more satisfying consumer experience by gathering relevant content from other sources. However, any business can still respond directly to any question, regardless of whether Google has previously supplied an automated answer.

A new “Request a Quote” or “Get a Quote” button (the wording seems to differ by country) has been spotted on select listings in a few verticals including, according to Joy Hawkins:

The feature appears automatically and cannot be managed by the business owner. It is linked to the GMB messaging feature, meaning that clicking on the button starts a two-way conversation between the consumer and the business, and that the only way to enable the feature is to have a listing in a supported vertical with messaging turned on. However, this is clearly a limited pilot so there’s no guarantee it will appear even if you would seem to qualify. Google is likely trying out a method of driving more traffic to messaging.

Google experimenting with new tabs and carousels in local pack

Several local SEO commentators including Sergey Alakov, Mordy Oberstein, and Mike Blumenthal have been sharing screenshots of new tabs in branded searches for brands like Pizza Hut and Microsoft, as well as carousels in keyword searches for terms like “breakfast near me.”

The tabs in branded searches are particularly interesting. They show that Google is trying to present related information about a brand in an organized fashion, recognizing that someone searching for Pizza Hut might be looking for locations, menu information, or other related topics. This new tabbed view is one way of demonstrating how well Google now understands Pizza Hut as an entity with semantic linkages to different types of related data. 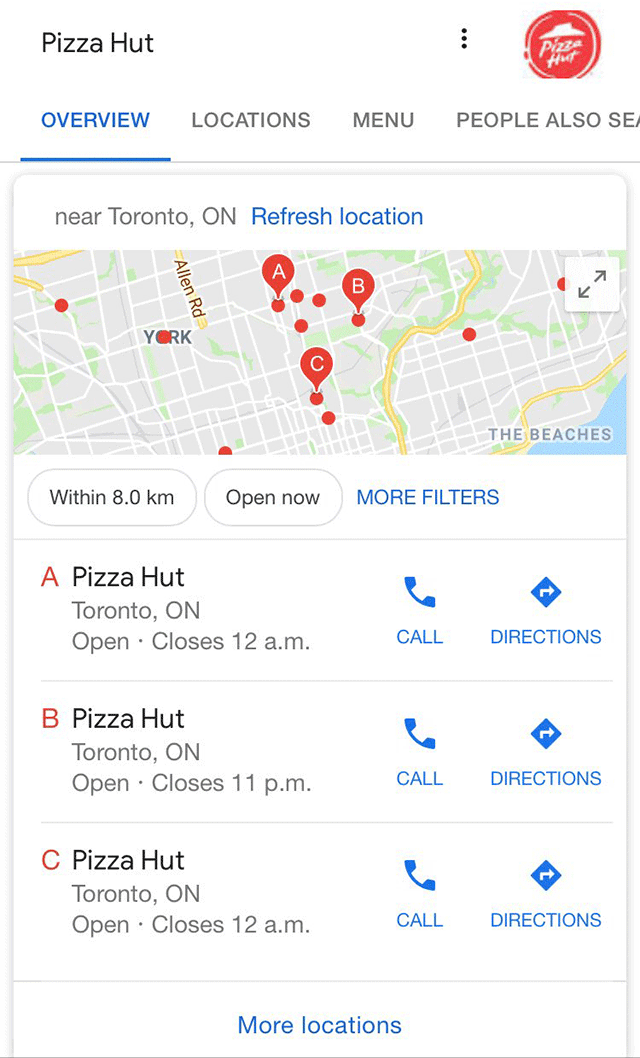 In a recent Google Webmasters hangout, John Mueller mentioned that the authority of content is especially important for so-called “your money or your life” (YMYL) sites, in particular those that cover healthcare and medical topics. These types of sites should really have an expert in the field providing content -- or, Mueller suggested, the content team should at least “work with experts” to ensure the information provided is correct and trustworthy. Though Mueller’s advice may not seem surprising in itself, it underlines once again how carefully Google scrutinizes the  authority, usefulness, and overall trustworthiness of YMYL sites -- those that can influence your physical health, safety, well-being, or financial security.

Study shows 48% of consumers use voice for web search

An extensive new study from Adobe, based on a survey of 1,000 consumers, finds that 48% of consumers use voice assistants for general web search and that 44% of users make use of voice technology on a daily basis. The study does not make a strong distinction between voice assistant software on smartphones and other devices as opposed to dedicated smart speakers, but it does find that smartphone voice search has a higher overall market penetration, with 85% of respondents saying they had used voice technology on smartphones, compared with 39% who had used smart speakers.

The breakdown below shows the number of consumers who reported conducting various  activities through a voice interface.

The study supports what is becoming the standard view of voice as an emerging technology -- that although its popularity has grown significantly over a short period of time, consumers have still been slow to adopt a range of behaviors on voice that is as broad as in text-based search. In particular, the model for monetizing voice search has not yet clearly emerged.