Monday Memo: Regional Grocers Connect with Local Customers, the Impact of the “Bedlam” Update, and More!

In this week’s Monday Memo, learn how regional grocery stores are competing against bigger brands; discover the impact of Google’s “Bedlam” local update and its core algorithm update; and learn about the uptick in GMB impressions as well as several other Google updates and changes.

Local grocery stores have struggled in recent years as Amazon, Walmart, and others make inroads into grocery sales as well as on-demand delivery and pickup services. But a recent CNN Business article suggests that regional grocery stores like H-E-B and Publix are successfully counteracting this trend by focusing on their connection with local customers. These grocery stores aren’t trying to be everything to everyone, but are rather focusing their offerings on key differentiators, like recipe suggestions or popular deli offerings. Some grocery stores are even experimenting with innovative partnerships, like Hy-Vee who partnered with Orangetheory to build mini-markets next to gyms. Others are building on their regional affiliations, such as Texas-based H-E-B, whose messaging emphasizes the “Texas lifestyle.” 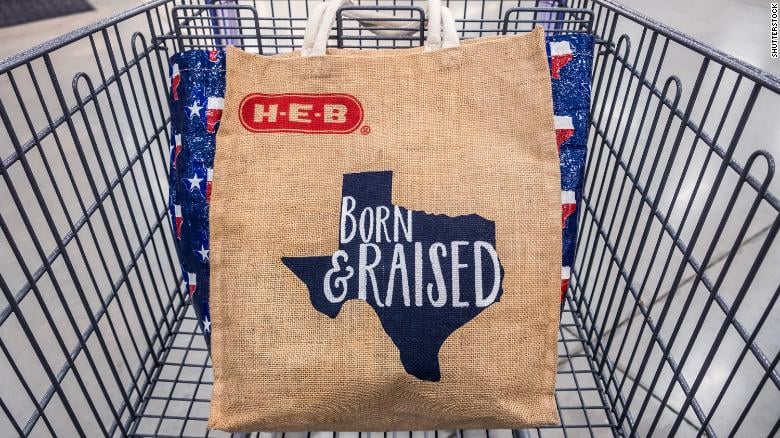 As I mentioned in last week’s Monday Memo, a local ranking shakeup that appears to be an algorithm update — but might also be a bug — caused some consternation in local search circles earlier this month. Now Craig Mount and Joy Hawkins have both written articles about the impact of the update, with Hawkins dubbing it “Bedlam” due to the large and seemingly inexplicable ranking shifts (both up and down) experienced by many businesses.

Mount argues the Bedlam update was about the narrowing of proximity as a ranking factor, with businesses losing rank in zip codes outside their physical location — and others presumably seeing corresponding gains. Hawkins notes, however, that after a few days of volatility, by November 10th many businesses (though not all) saw corrections and restoral of previous rankings. She observed that spam listings cropped up after the change in many categories, but suggested that this is a common if unintended side-effect of many Google updates. In a recent forum discussion, Hawkins suggested that she believes the update has more to do with relevance than proximity. 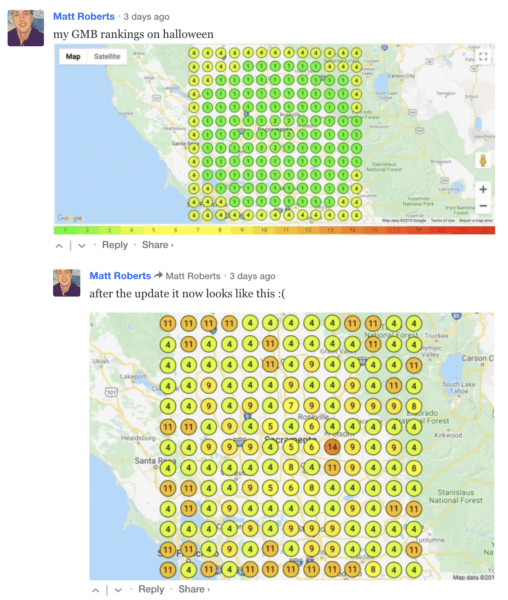 In apparently unrelated news, Google also rolled out an organic algorithm update around November 8th. A great deal of online chatter erupted over the weekend of November 9-10, with several SEOs claiming their organic traffic was impacted by 30% to 50%. Google search liaison Danny Sullivan has since confirmed the update, but claims that it is only one of many updates Google performs on a weekly basis. Sullivan has stated, echoing Google’s standard line on these topics, that the only way to address the impact of algorithm updates is to improve the quality of content on your site. He did say, however, that SEOs who feel their content is not being featured where it should be can ask Google to look into it by posting comments in the Webmaster Forum.

Many businesses seeing a lift in GMB impressions

In a Twitter conversation sparked by Craig Harkins on November 12, several local SEOs are confirming that the businesses they work with are seeing significant, ongoing upticks in GMB Views (the GMB term for impressions), without a corresponding increase in Actions. David Mihm shared a trend chart showing average Map Views for ThriveHive SMB customers continuing to trend upward while Search Views remain flat. The increase has so far not been linked to any additional exposure, with some suspecting that Google is merely changing its methodology for counting Views, as it has done more than once in the past. However, a change in methodology would normally result in a one-time adjustment, rather than an ongoing trend.

Across the brand locations we monitor, Brandify has seen similar trends for some locations but not others, in contrast to the 2018 spike in Searches which impacted a majority of brand locations. The chart shown here represents Views for a brand with approximately 200 locations over a three-month period from August 1 to November 1, 2019. In this particular case, the uptick in Map Views clearly begins on September 19.

Google claims, based on its own data, that half of all phone calls to small businesses go unanswered. Six months ago, Google’s Area 120 incubation lab released a product known as CallJoy to address this problem. CallJoy leverages the same AI technology used by the Google Duplex virtual assistant to book reservations and appointments, but in this case, the AI is in the hands of the business rather than the consumer. Now Google has announced an expanded feature set for CallJoy that includes customization options, including the ability to upload FAQ content so that the assistant can handle specialized inquiries more efficiently. CallJoy also provides call recordings and analytics, so that business owners can monitor its effectiveness and, potentially, analyze client needs in order to improve their business.

Google recently removed its toll-free support numbers from the Google My Business homepage. Users still have several support options, however, including requesting a callback, starting an online chat session, and corresponding with GMB support via email — not to mention forum support and reaching out to GMB on Twitter.

Google Maps now has a method for reporting users, including Local Guides, whose behavior violates Google’s terms of service. Using the Google Maps app on your phone, you can tap any user (for instance next to a review they’ve written) and choose “Report” from the three-dot menu at the top of the user’s profile page. You can then select a reason for reporting them, with options including “Offensive, hateful, or sexually explicit,” “Legal issue, like copyright infringement,” and several more, including “other.” The feature may be useful in cases when a user shows a pattern of posting spammy reviews, in addition to flagging the reviews themselves.