In this week’s Monday Memo, read about New York City’s ruling against cashless stores; Google’s response to criticisms of its search redesign; how Google understands images; an important change to featured snippets; and Facebook reviews in Bing listings.

In a strike against the move to a cashless economy, the New York City Council has voted to require all stores, restaurants, and retailers to accept cash payments. San Francisco, Philadelphia, and the states of New Jersey and Massachusetts already have regulations on the books requiring that stores accept cash. Advocates for protecting cash transactions point out that many poorer Americans do not have access to credit and debit cards; in fact, almost one quarter of the population of the state of New York is considered “unbanked or underbanked.” Amazon’s experimental, cashierless Amazon Go stores are among those affected by the New York City regulation. The stores now plan to accept cash payments.

Google to experiment with search result changes in response to criticism

In a statement on January 24, Google responded to criticisms of the recent redesign of desktop search results, which placed favicons next to organic results and changed the “Ad” label for sponsored results from green to black. The redesign was widely panned for making ad placements less distinguishable from organic results, since the ad tag appears in the same position as the new favicons. Google had originally claimed that the new ad tag was actually more noticeable than the old version.

In response to the complaints, the company said it would conduct a series of experiments over the next few weeks, whereby some users will see no favicons or favicons in different positions. Presumably, the result of these experiments will be a modified version of the new design. The black “Ad” labels are likely to remain.

How Google understands images in search

Bill Slawski has offered another useful writeup of a Google patent, this time a patent granted to the search company last November called “Mapping images to search queries.” As usual, the patents Google is granted may or may not represent functionality the company is employing today. However, this particular patent describes a process that seems quite similar to what one experiences when searching by images in the Google search console or using Google Lens to identify an object captured by a smartphone camera.

The patent describes Google’s ability to extract entities from images and match those entities to relevant search results -- as you’d expect. But there are a couple of interesting tidbits included in the patent language, including the concept of “context” for images. Context in the case of this patent means the physical context in which the image was taken. The patent describes situations where a photo of a coat taken at a shopping mall may prompt results related to shopping, whereas a photo of a coat taken at home may prompt weather information, as if in response to the question “Do I need my coat today?”

In addition to physical context, another detail that caught my attention is the distinction between “coarse-grained” and “fine-grained” analysis of images. The patent says Google may analyze images based on more generic “coarse-grained” characteristics like “building” as well as by specific “fine-grained” labels like “Eiffel Tower.” Given sufficient confidence in the user’s intent, image queries may even trigger Knowledge Card results, according to the patent.

The search community was recently shaken by an announcement from Google that, in order to “declutter” search results, the company will begin demoting links to the second search page when that same web page has triggered a featured snippet. [Note: I previously stated that links were being demoted to the second search page, but Google has clarified that if links do appear there, this is not by design.] Previously, featured snippets occupied so-called “position zero” above traditional links, and were typically followed by a traditional link in position one for the same web page from which the snippet was taken.

Though at first this change might seem benign -- after all, the pages that previously triggered snippets are still doing so -- SEOs have pointed out that snippets, due to their tendency to answer questions on the search result page itself (the so-called zero click phenomenon), have a significantly lower click-through rate than do position one results. As noted in Bright Local’s writeup, an Ahrefs study of 2 million search pages with featured snippets found that the snippet garnered just 8.6% of the average page’s clicks, with the position one result winning 19.6%. Those concerned about the loss of traffic can opt out of snippets with the “nosnippet” tag.

As Jason Parks has pointed out on Twitter, Bing now prominently features Facebook reviews in some of its local results. Jason offered a screenshot of the Bing results for “Columbus Personal Injury Lawyer” where the only review source was Facebook. 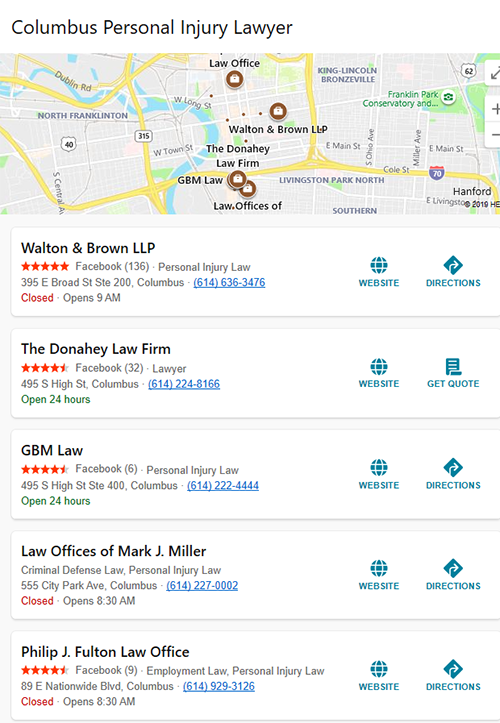 In the past, Bing’s reviews were primarily sourced from Yelp, with some reviews showing from other sources such as Foursquare. Twitter user Jonathon Cunningham noted that Bing has been showing Facebook reviews for the garage door vertical for some time; still, the change is probably news to most users, since many if not most Bing listings still feature Yelp reviews. Also worth mentioning is the fact that back in 2018, Facebook changed its reviews to yes/no “recommendations” which no longer work on a five-star scale; yet Facebook-based average ratings still display on Bing, as shown in the screenshot. In one of the listings I looked at for personal injury attorneys in Columbus, the ratings were taken from older reviews, and the listing contained at least one recent “recommendation” from Facebook with no rating.