In this week’s Monday Memo, learn about Yelp’s new features for businesses and consumers; the new California law that could upend the gig economy; rumours that Groupon might acquire Yelp; the growth of “Buy Online, Pickup in Store”; and restaurant recommendations in Google Discover.

Yelp has announced new and upgraded features last week geared both toward business owners and consumers, and furthering the company’s stated goal of “significantly evolv[ing] and improv[ing] the consumer experience.” The big new product announcement is called Connect, and it’s somewhat similar to Google Posts, except that Yelp’s version is a paid product and it’s currently geared specifically to restaurants. Connect is designed to help restaurants promote menu updates, special offers, and the like on their Yelp profile pages and in notifications and weekly emails that are sent to Yelp users who have previously expressed an interest in the restaurant.

Additionally, Yelp is releasing updates to its Waitlist product including “predictive wait time,” a feature that uses actual restaurant data to predict how busy it will be at a given day and time, and “notify me,” which reminds users to add themselves to the Waitlist at a predefined time -- for instance, if you’re meeting friends for dinner at 7:00, the “notify me” tool can remind you to add your party to the Yelp Waitlist at 6:30. Presumably this feature will work well in combination with predictive wait times.

California governor Gavin Newsom has said he will sign a bill passed by the state legislature last week that would require on-demand services like Uber, Lyft, and DoorDash to convert its contract-based workers into employees, making them potentially eligible for minimum wage and other benefits such as employer-sponsored health insurance and retirement plans. According to the New York Times, under the law “workers must be designated as employees instead of contractors if a company exerts control over how they perform their tasks or if their work is part of a company’s regular business.” This broad definition would apply not only to on-demand workers but potentially to construction workers, stylists in salons, and other jobs where workers have contractor status. The law is expected to go into effect on January 1. Uber has signaled it will fight having the new rules applied to its business.

Groupon may be in talks to acquire Yelp

Groupon is reportedly in talks with Yelp about a possible acquisition of the latter company, according to a story in the Wall Street Journal that was widely picked up last week. Groupon has struggled in recent months with poorly performing stock prices, and would presumably see the purchase of Yelp as a means to strengthen its portfolio of offerings for small businesses. The two companies are roughly comparable in size; Groupon generates more revenue, but Yelp has a bigger stock market valuation at $2.5 billion compared to Groupon’s $1.4 billion. There have been talks of a merger or acquisition between the companies in the past. In related news, Forbes recently published a piece suggesting it would make financial sense for Facebook to acquire Yelp.

The growth of “Buy Online, Pickup in Store”

Bing’s Christi Olson published an interesting article in Search Engine Journal the other day about the growing popularity of the “Buy Online, Pickup in Store” (or BOPIS) promotion. Brick and mortar businesses of all kinds, from restaurants to grocery stores to clothing and department stores, are finding the BOPIS option to be a good fit for many consumers who want to combine the convenience of online shopping with the flexibility of store pickup -- where, for example. Nordstrom shoppers can try on their online purchases right away and return or exchange them if needed without having to make a second trip. BOPIS seems to be a winning strategy for retailers who know they must innovate to compete with online shopping, and plays to the strengths of traditional retailers who are now dedicating staff and space in the store to online pickups.

The Discover feed in the Google app for Android is now displaying recommendations for local restaurants under the heading “Inspiration for your next meal out.” These recommendations are displayed in the form of cards arranged in carousel format. Tapping on any card will open that restaurant’s Google listing in a new tab. 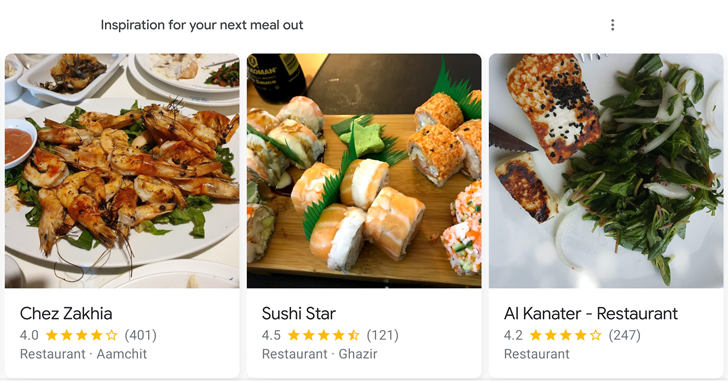