On the heels of a moderately unusual ranking fluctuation in mid-February, last Wednesday, March 10, saw one of the largest fluctuations ever recorded by BrightLocal’s Local RankFlux tool. Severity is measured by the tool on a scale of 0-10 with 0-3 indicating normal levels of activity. The mid-February anomaly saw two days of 3-4 range volatility. On March 10, the RankFlux score was 6.78.

Many local SEO commentators, including Joy Hawkins, Carrie Hill, and Austin Holdsworth, reported on Twitter that both the February and the March ranking fluctuations seemed to have a positive impact on ranking for the majority of businesses they examined. But it’s undetermined at this point whether these ranking adjustments equate to one or more local algorithm updates. Bugs sometimes influence ranking as well, as thus far Google has issued no comment on either the February or the March fluctuation.

In fact, Google’s announcement specifies that booking links can now be placed for free by “hotels and travel companies around the world,” meaning that travel booking companies like Expedia can also participate. The announcement notes that free booking links continue a trend that began with free participation in Google Flights, announced early last year, and free listings in Google Shopping, which rolled out in phases in 2020.

Google says they rank free booking links according to a variety of signals, including “consumer preference, value offered to the user, landing page experience, and historical accuracy of the prices provided to Google.” Paid booking links will still be given preference over free links and will be clearly marked as ads.

Many GMB Posts are being rejected for no apparent reason

Tweets from Joy Hawkins and Ben Fisher in the last few days report that Google is rejecting a great number of Google Posts in a pattern that appears unintentional. Hawkins in her post says, “There are a lot of people experiencing issues right now with rejected Google posts.  Google is aware and looking into it. For now, I would simply try reposting the same thing, and if that doesn't work, just wait a few days.” Fisher similarly writes, “PSA: Google My Business Posts are getting rejected for no apparent reason. GMB is aware and actively investigating this.”

As first shared on Twitter by Thibault Adda, Google appears to be surfacing “Order Online” buttons in some GMB restaurant profiles, with the button linked, for the first time, to the restaurant’s own ordering platform, rather than just to third-party services like DoorDash or Postmates or to the Google Food Ordering platform. Adda notes that the prompt appears both as a button in the knowledge panel and as an “Order” icon in the local pack.

I can’t reproduce this result myself, so it appears to be either a beta test or a slow rollout. What appears to be happening, though, is that the native ordering platform for Olive Garden is being shown first among the ordering choices presented to the user, corresponding to the placement of the ordering URL under the “Order” heading further down in the knowledge panel. Google recently made it possible for restaurants to control the order or URLs under the “Order” heading; presumably this is a further stage in granting more control to businesses.

Google is rolling out some new Google Maps features. The first is called photo updates; it lets users leave quick photo-based updates about a place in Google Maps without being required to leave a review. To add a photo update, you merely visit the Updates tab in any listing and add your photo plus a short text description. Other users’ photo updates can also be viewed in the Updates tab. 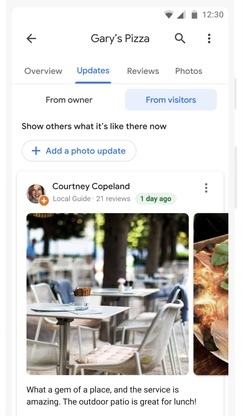 Google Maps users will also soon be able to draw new roads or correct existing roads with a new desktop tool. In the desktop version of Maps, you’ll be able to click “Edit the map” and then select “Missing Road,” after which you can draw lines indicating where a road should be. According to Matt Southern’s writeup, “The road editing tool will also allow users to rename roads, change road directionality, and realign or delete incorrect roads.”

Our own staff at Brandify has noticed that several GMB categories have lost attributes in the last several days. We see Google adding and removing attributes on a fairly regular basis, sometimes accompanied by a public announcement, as with the pandemic-related updates last year, sometimes not. What’s somewhat unusual about the current round of removals is the sheer number of attributes that were removed within a short period. Perhaps Google is pruning out attributes that weren’t used as often.

It makes sense that medical labs can’t really offer telemedicine or video visits. The reason for the other removals isn’t as clear. Shout out to Brandify’s Kevin Dao for sharing this update.