Is Apple working on a search engine?

As reported by John Henshaw at Coywolf, there are a few possible signs that Apple may be tinkering with a new search engine. These include an increase in job postings for search engineers and a change in iOS whereby Spotlight Search now supersedes Google results. Apple’s Applebot web crawler has also been increasingly active. Outside circumstances may be prompting Apple’s activities in part, such as anti-monopoly actions against Google in the U.K. that may result in the need to offer choices to iOS users. Henshaw predicts that an Apple search engine would emphasize personalization, with a strong focus on privacy, and would be more deeply embedded in the operating system than other search engines.

Bright Local’s Local Rank Flux tool, which monitors fluctuations in local search ranking, measured two days of highly unusual activity last week. Local Rank Flux measures fluctuations on a scale of 0 to 10, with 10 being the most severe. On Wednesday and Thursday last week, the average fluctuations were 5.65 and 6.01 respectively, compared to normal fluctuations in the 2.8 to 2.9 range earlier in the week. Industries especially impacted include real estate, medical, and legal, all of which had fluctuations above the already-high average rate. So far, there’s been no report of a local algorithm update; in fact, Carrie Hill reported on Twitter that many of Thursday’s fluctuations seemed to be a reversal of the activity on Wednesday. 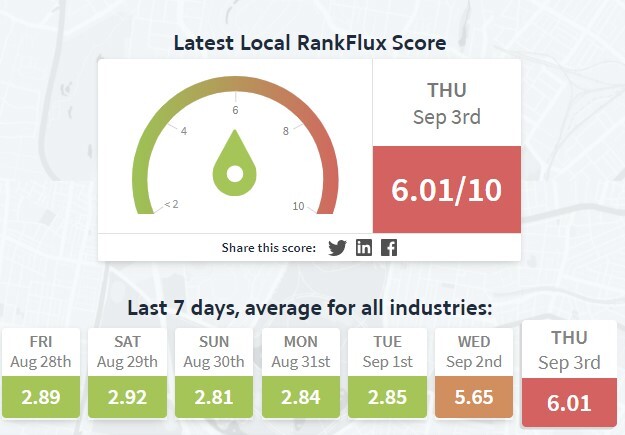 SEMRush has published an update to its annual study of voice search ranking factors. Noting that 58% of voice search users conduct local business searches, this year’s study focuses on local search in particular. The study notes that Apple’s Siri, Google Assistant, and Amazon Alexa have comparable market share, so the attention of SEOs should be applied to all three, although their algorithms differ significantly.

To optimize for Google Assistant searches, the study recommends that marketers focus on getting business to rank in Google’s Local Pack, which supplies the content for many Assistant searches with local intent. Alexa was ranked lowest in ability to answer local queries successfully. Siri, by contrast, had the highest level of success with local queries; review count and rating on Yelp was strongly correlated with businesses returned in local results by Siri. Optimizing GMB and Yelp profiles were key recommendations for businesses who want to rank highly in voice search results.

How to make a GMB listing more “clickable”

Bright Local asked several local SEO experts to weigh in on the question of what businesses can do to make GMB profiles more clickable -- that is, more likely to turn searchers into engaged customers. Recommendations included responding to Q&A so that consumers know you’re listening; using Google Posts to enhance your profile and add a clear call to action; adding high-quality photos and videos to make your profile more engaging; adding product and service lists; enabling the GMB messaging feature; responding to and requesting reviews; and, generally, making use of every available feature in GMB to make your listing stand out from the competition.

Google Maps will reportedly soon add a new map layer that shows where COVID-19 outbreaks are taking place, with color-coding that appears to indicate the severity of the outbreak in each geographical region. First noted by Jane Wong, the update seems focused for now on the U.S. and Canada, but Google appears to be referencing data from India as well, so there may be a more global version in the works.

The role of offline retail in the upcoming “Corona Xmas”

A new column from Greg Sterling on Search Engine Land looks forward to our first “Corona Xmas.” Sterling notes that the coming holiday season represents an opportunity for brands with brick-and-mortar locations to provide purchase options that will appeal to holiday shoppers, making use of a hybrid model that mixes online with offline shopping. Shoppers are likely to spend less this year and to be on the lookout for deals. But they’ll be looking online, perhaps only venturing out to stores to pick up online orders or in cases where retailers can make in-store shopping especially compelling. This new consumer behavior is being described as ROBO: research online, buy offline. It was a trend that began before the pandemic; in 2019, Google reported that 46% of consumers confirm inventory online before visiting a store.

Google My Business is prompting businesses to enable virtual appointments using Google Meet, Webex, Skype, and Zoom. A new “Connect with video” prompt is appearing in the GMB dashboard, possibly triggered when the business indicates that it offers online appointments. Though the messaging suggests that the online appointment provider will be integrated somehow with GMB, in fact the links simply prompt the user to sign up with the provider in question. The messaging may, however, indicate future plans on Google’s part to link online appointments more closely with GMB features. 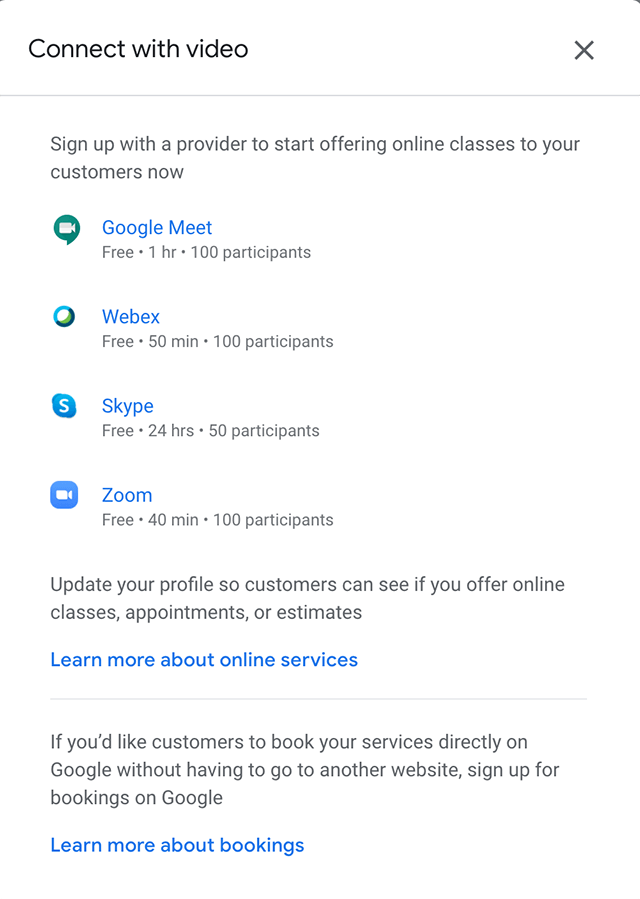