In this week’s update, learn about a food ordering upgrade in GMB; the delay of the Page Experience update; new Apple Maps features; service attributes in GMB sourced from the business website; reviews showing when the user visited the business; and new GMB recycling attributes.

Restaurants will notice a new tab in their Google My Business dashboard called “Food ordering.” As with some other specialized GMB tabs, such as Bookings or Products, the new tab consolidates new and existing tools that help restaurants manage food ordering options for display in Search and Maps. These tools include an on/off toggle for the “Order online” button; a table that allows users to set preferred providers for pickup and for delivery; a field for entering the restaurant’s own ordering link to be displayed as a “Place an order” button; and a prompt to help restaurants set up online ordering directly from the restaurant’s Google profile, powered by Google-owned TheOrdering.app.

Several of these features are new. Restaurants did not previously have the ability to select preferred providers for pickup and delivery, and had no control over whether or not to display the “Place an order” button. There was a toggle (still present for now) that was added somewhat recently to the Info tab allowing restaurants to turn food ordering on or off, but restaurants now have much more control than they did before. The workflow for setting up TheOrdering.app is also new, and currently Google is charging no fees for using the service, though the company will start charging 1.5% per order in 2022.

Place Action URLs -- Google’s term for URLs in the business profile that allow users to take some sort of action -- will continue to be managed in the Info tab for the most part, including URLs for food ordering. The “Food ordering” tab is more about controlling the behavior of ordering buttons as opposed to secondary URLs. 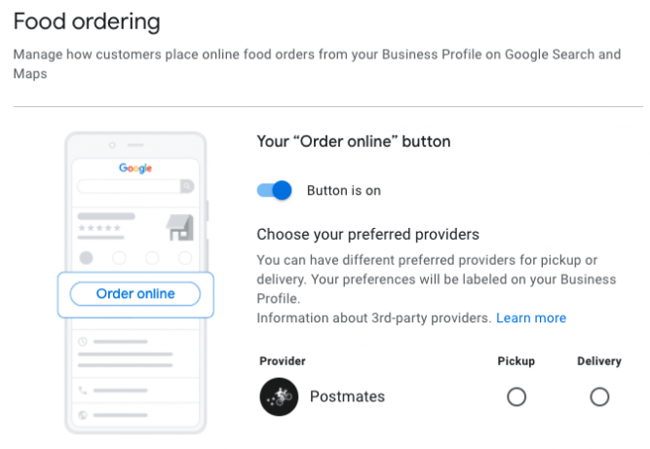 Google has announced that the Page Experience update, slated for May, will be delayed until mid-June, with the full rollout expected to last from then until August. In the meantime, Google has launched a new Page Experience Report in Search Console which is designed to help SEOs prepare for the update. According to Barry Schwartz, when the rollout does begin in June, ranking changes will begin to be introduced gradually, and top ranking in mobile results will no longer be restricted to AMP pages. Google’s statements about the new rollout date suggest there were internal delays as well as a desire to give SEOs more time to prepare for the change.

The iOS 14.5 update for the iPhone is due to come out either today or tomorrow, according to 9to5Mac. Among the expected new features are a few updates to Apple Maps, including a new incident reporting feature that is designed to help Apple Maps compete with Waze. Apple users will be able to report accidents and speed traps via the Apple Maps app or using Siri or CarPlay, meaning the reports can be delivered in a hands-free manner. The feature is expected to go live at first in the U.S. only.

Also among the possible updates is a rollout of Apple’s recommendation feature in the U.S. Apple Maps launched thumbs up/thumbs down recommendations (along with user-uploaded photos) several months ago, but the feature has only been available to date in Australia, the UK, and a few other places. A keen observer, though, noticed that a screen displayed at Apple’s “Spring Loaded” event the other day included the recommendation feature in a U.S. listing.

Google appears to be aggressively adding new services to business profiles based on content on the business website, according to a report from Whitespark. The report points to some remarkable examples, such as a tree service whose profile recently had 40 service features added by Google based on their appearance on the business website. For the most part, these were custom services, not the preconfigured options Google offers based on the business’s categories. In other words, Google is taking phrases from the business website and interpreting them as services. Most of the time, according to the report, the services are fairly accurate, but the tree service company had several services listed that made no sense, like “trees healthy” and “training young trees.” These did appear as phrases on the website but were clearly misinterpreted by Google. Luckily, businesses can delete or modify these service attributes in the GMB dashboard, but their appearance makes it even more important to check listings regularly for erroneous information.

Google reviews showing when the user visited the business

Amy Toman has shared on Twitter a new Google feature that reports when a reviewer last visited the business being reviewed. The reference to the month and year of that visit appears beneath the review and in addition to the date when the review was written. Though Google may or may not be attaching visit dates based on location information shared by the user, Toman notes that Local Guides are now, at least sometimes, being asked when they last visited the business as part of the review writing process. So perhaps the two features are linked; regardless, this is a limited test and I wasn’t able to reproduce it. Note that the screenshot also displays the helpfulness buttons Google has been testing recently (which I also can’t currently reproduce). 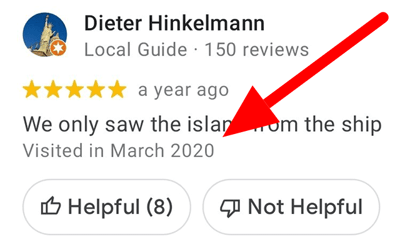 In honor of Earth Day, Google has added recycling options to the list of attributes businesses can configure in Google My Business. In a new “Recycling” section in the attributes interface, businesses can specify the types of recycled items they accept, including plastic bags, household hazardous waste, electronics, and other items. The appearance of the new recycling options depends on the primary category of the business, as with many attributes. In my perusal of a few listings, I also noticed that the number of recycling attributes differs by category. Recycling centers have about 11 options, whereas department stores have only two, clothing and plastic bags. 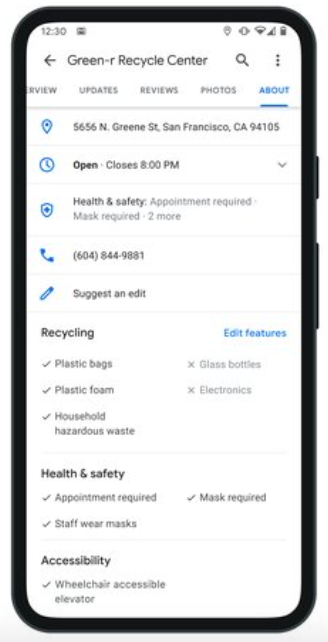