In this week’s update, learn about new GMB metrics; the goals behind Google’s new recycling attributes; the impact of GMB keyword stuffing; Facebook’s Nextdoor equivalent; SEO in a cookieless world; and Google’s AI-powered battle against spam.

As noted on Twitter by Stefan Somborac, Google has added Bookings to the list of metrics tracked in the new Interactions chart in Profile Performance, itself a still-new area for showcasing GMB metrics, launched in January and updated several times already this year. At first, Performance metrics included Calls and Messages under Interactions, as well as a breakdown of search terms that triggered your business profile to appear. Shortly afterwards, Google added a breakdown of views by Search and Maps as well as, for the first time, by Desktop and Mobile. Now, businesses who have enabled Bookings within GMB can track those conversions as well. It appears that the metric focuses specifically on bookings managed through a qualified third party provider as part of the Reserve with Google program.

Google continues the transition from GMB Insights data to the new "Business Profile performance" metrics. The ever-expanding measures now include the number of completed bookings (if you've set up bookings through a provider).https://t.co/XNDQgx88bM pic.twitter.com/pB7pRb9y7u

Google sent out some detailed information a few days back to GMB partners about the new recycling attributes discussed in this space two weeks ago. Google is placing a big emphasis on highlighting the availability of recycling stations and drop-off kiosks in various business locations, noting that “consumers who want to recycle face inconsistencies in what can be recycled and a lack of clarity on where.” To quantify the problem, Google notes several statistics:

Google encourages businesses to “stand out as sustainability leaders” by promoting their recycling programs, citing a 2019 study that claims sustainable business practices contribute to brand loyalty.

The impact of GMB keyword stuffing

Colan Nielsen has a new study in Search Engine Land covering the impact of keyword stuffing in GMB business names. This long-standing tactic is well known in the local SEO community to be an effective means of outranking competition in local results, despite the fact that keyword stuffing is considered spam by Google and is often laughably obvious. An example cited by Nielsen is S and Z Handyman Service, whose GMB name reads “S and Z Handyman Service - Handyman, Handyman Services, Home Remodeling, House Painting, Interior And Exterior Painting, Handyman Repair, Home Handyman in Morgantown WV.” Google does attempt to penalize businesses who engage in this practice, but Nielsen shows the penalties are unevenly distributed, with only 40% of 50 businesses he examined receiving a suspension from Google.

Nielsen observes that over the last year, a newer tactic has appeared for attorneys and other verticals, where businesses are actually changing their business names in order to include more keywords. This is an attempt to act within Google’s guidelines, which state that your GMB business name must match your real-world signage, while still getting the ranking benefit of keyword stuffing. However, the more popular this practice becomes, the less of a benefit individual businesses will see, because they will have to compete with a glut of businesses doing the same thing. Nielsen suggests that the short-term benefit is not worth the long-term hassle. 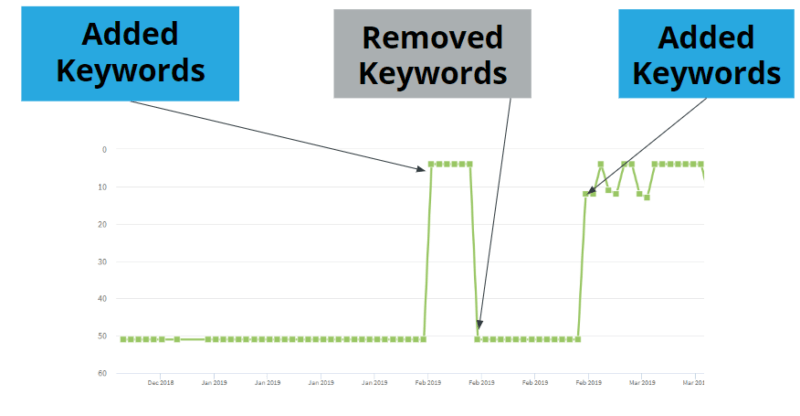 It’s by now a somewhat dated cliche to refer to Facebook as the “sleeping giant of local,” but this was a popular formulation in years past, when it seemed obvious that Facebook was sitting on a goldmine of personal and commercial interactions and could, if it so willed, become a powerful local search and discovery engine. In some ways, with tools like Facebook Marketplace, that prediction has come true, and of course Facebook is an important channel for businesses of all kinds to interact with consumers. But the local angle remained underdeveloped. Now, Facebook is announcing Neighborhoods, a Nextdoor-like experience designed to help Facebook members connect with people and places in their immediate vicinity. Within Neighborhoods, users create a special neighborhood profile and can join both the neighborhood they live in and any others in the surrounding area. You can make announcements and answer questions in a neighborhood’s feed, and users can assume special roles, “including socializers who spark friendly conversations,” according to the announcement. Neighborhood groups can be created around special interests such as local sports. Nextdoor-style recommendations help users discover local businesses, and polls allow users to vote on favorite local places.

Facebook Neighborhoods is currently live in Canada, and, Facebook says, “will begin to roll out to select U.S. cities soon.”

The role of SEO in a cookieless web

In an interesting post on Search Engine Journal, Winston Burton discusses the demise of third-party cookies and what this transition means for SEO. Burton reminds us that cookies have been used for years in order to track users around the web, reminding them of their interest in a product or service through carefully placed advertisements in hopes of getting the user to re-engage and convert. This among other use cases for third-party cookies will soon be a thing of the past, but Burton suggests this isn’t entirely a bad thing. Cookies, after all, have long been a faulty means of tracking actual consumer activity, which skips around between devices, and cookies may also have created a dependence among marketers on driving transactions instead of providing valuable content that meets the intent of search. This latter focus, the province of good SEO, can be augmented through the use of Google Search Console, which looks at user behavior in the aggregate, as well as first-party data and real-time personalization. Finally, Burton suggests that SEOs focus on transactional rather than information content, meaning content that highlights the value of the product or service the business is promoting and compels the user to seek out the business.

As of 2020, Google began using new AI-based tools to fight spam, reporting that these tools have the ability to block 99% of sites with characteristics like these:

The GoogleBot crawler can block spam content from making its way into the Google search index. Spam not caught by GoogleBot can be trapped at the moment Google responds to a query and decides how to rank responses. Though AI now blocks 99% of spam, some spam content does make its way through, which is why Google still relies on human reviewers who can penalize spammers through manual actions. 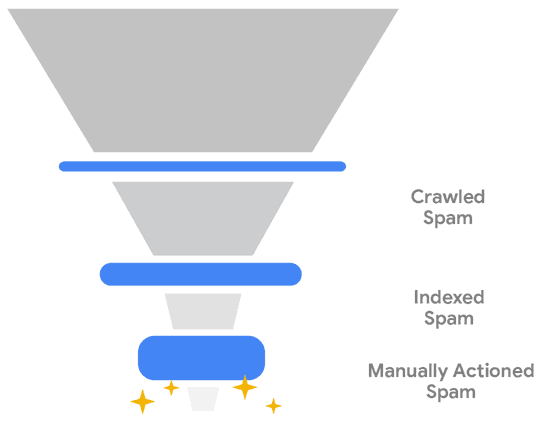